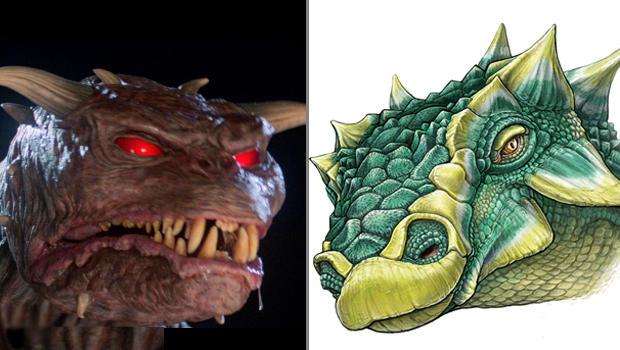 Scientists in Toronto have named a newly identified dinosaur after a monster from the original "Ghostbusters" film.

The name references Zuul, a mythical dog-like beast that terrorizes characters played by Sigourney Weaver and Rick Moranis in the 1984 movie. The museum says scientists picked the name Zuul based on the features of the dinosaur's head, which includes a short, rounded snout and prominent horns behind the eyes.

Another "Ghostbusters" star, Dan Aykroyd, posed for a photo with the dinosaur's fossilized skull on a visit to the museum's paleontology collection.

The species name crurivastator means "destroyer of shins," a reference to the dinosaur's sledgehammer-like tail, the museum said. That spiky tail could inflict real damage when Zuul faced off against an opponent.

The fearsome creature measured about 20 feet long and would have weighed about 2.5 tons. The museum says it likely favored a diet of plants.

The skeleton of the armored dinosaur was excavated from the Judith River Formation in Hill County, Montana. Scientists say it's one of the most complete, best preserved ankylosaurs ever found, with a complete skull and tail club and preserved soft tissues.

It's believed to have lived about 75 million years ago.

The scientists described the new dinosaur species in the Wednesday issue of the journal Royal Society Open Science.

Mariana Trench: It Doesn't Get Any Deeper