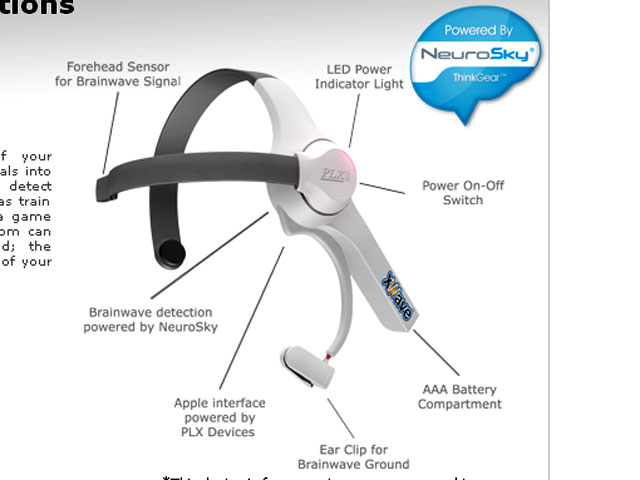 Apparently the revolution that was touch screens on mobile phones was not enough for some hardware developers.

The device maker PLX Devices is now offering a headset called XWave that "can sense and detect human brainwaves, interpret them and connect it to everyday technology," according to promotional material on their website.

PLX Devices founder and CEO Paul Lowchareonkul told the U.K. Daily Mail that it was only a matter of time before products like the XWave entered the mainstream.

"The human brain is the most powerful, complex thing in the universe, and for the first time, we're able to harness its amazing power and connect it to everyday technology," Lowchareonkul said. "With the development of 3rd party apps, the potential for innovation is limitless."

Thus far, PLX is only offering apps that interact with the XWave for Apple mobile devices like the iPhone, iPad and iPod touch.

The device itself looks like an ordinary headset for telephone operators, and its website claims that XWave is perfectly safe because it only "listens" to brainwaves and "does not transmit or send any signals."

As of this report, there are four apps available that interact with the XWave, which retails for about $100. They include a basic set-up app; an app that allows you to "upload your song list and sync your brainwaves with any song in your library"; a "Tug of Mind" app; and a meditation app.

In the future, PLX says on its website that "you will be able to control and float objects in video games by simply thinking about it, or train your mind to focus and relax on command."