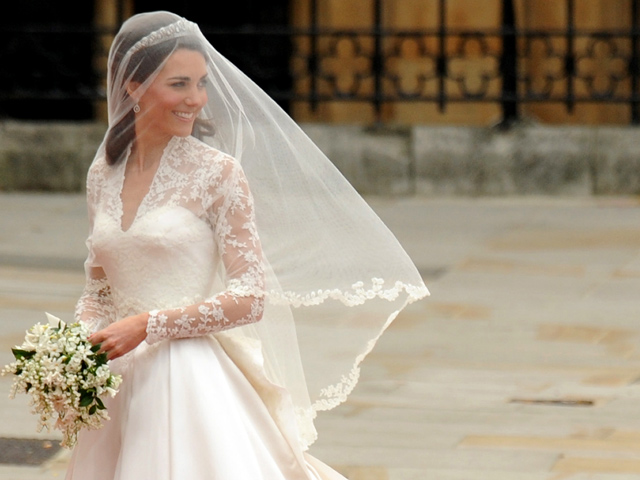 Catherine Middleton's wedding dress was England's best-kept secret in the months leading up to the royal nuptials. But on Friday, all was revealed when Middleton stepped out in a timeless, lace floral dress, designed by Sarah Burton at Alexander McQueen.

Allen B. Schwartz, creative director of ABS by Allen Schwartz, told CBS News the dress is likely to be copied.

He said, "I think the reason that new brides, of course, will want to wear this dress because, actually, it's a very forgiving dress. It's very elegant."

But not everyone liked it. In an AOL poll, seven percent of those surveyed said they didn't. However, 78 percent said the dress was "classy, elegant and gorgeous," and 15 percent the dress was "Not what I expected, but I liked it."

"Early Show" Style Contributor Katrina Szish is in the "Not what I expected, but I liked it" category.

"But then again, Sarah Burton is also known for pairing traditional with the modern, for her impeccable tailoring and we did see that here."

Pictures: Most beautiful royals in the world

The dress was embellished with extremely intricate lace.

"It was handmade appliqued lace made by the Royal School of Needlework - hand done. They actually had to wash their hands every 30 minutes to keep it clean. The needles were changed every three hours to keep them sharp. Here you can see some of that lace applique. It was Chantilly lace and English lace. It included rose, thistle, daffodil and shamrock designs. This is one of those dresses, every detail (was important)."

"The tailored tiara from 1936, borrowed from the queen," said Szish. "It was a Cartier vintage piece that was beautiful with her ivory tulle veil and that V- neckline and the lace top really worked perfect on Kate."

Pictures: What to wear to a royal wedding

Szish said the dress was very reminiscent of Grace Kelly's 1956 wedding dress for her marriage to Prince Rainier III.

"You can see the similarities with the long, lace sleeves," Szish said. "Even with the sweetheart neckline and sort of the really cinched in waist detailing. Very, very similar."

She said, "The similarities are remarkable. Again a timeless dress, but Grace Kelly's was one of the most copied wedding dresses of all time."

But, in Szish's opinion, will Kate's dress be widely duplicated?

Additionally, lace and ivory instead of white, Szish said are likely to affect trends.

She added, "Definitely, we're going to see lots of fitted bodices. Kind of Victorian corset style. Kate actually even had a little bit of padding at her hips, which I thought was a little bit interesting to accentuate that style again. That was a Sarah Burton touch."

Another news maker on the royal wedding day for fashion was Middleton's sister, Pippa.

Pictures: A day for hats

Szish said the form-fitting white dress was like a coming out moment for the famous sister.

"I think men around the world are saying, 'Hell-o, Pippa!'" Szish said. "I heard a lot of that going on yesterday. She looked stunning. And I do think the white was appropriate. I mean, with all of the little bridesmaids, the white really just went with the palette. It was flawless. I don't think she upstaged Kate at all. Also she was wearing Sarah Burton and I think it was a perfect choice."