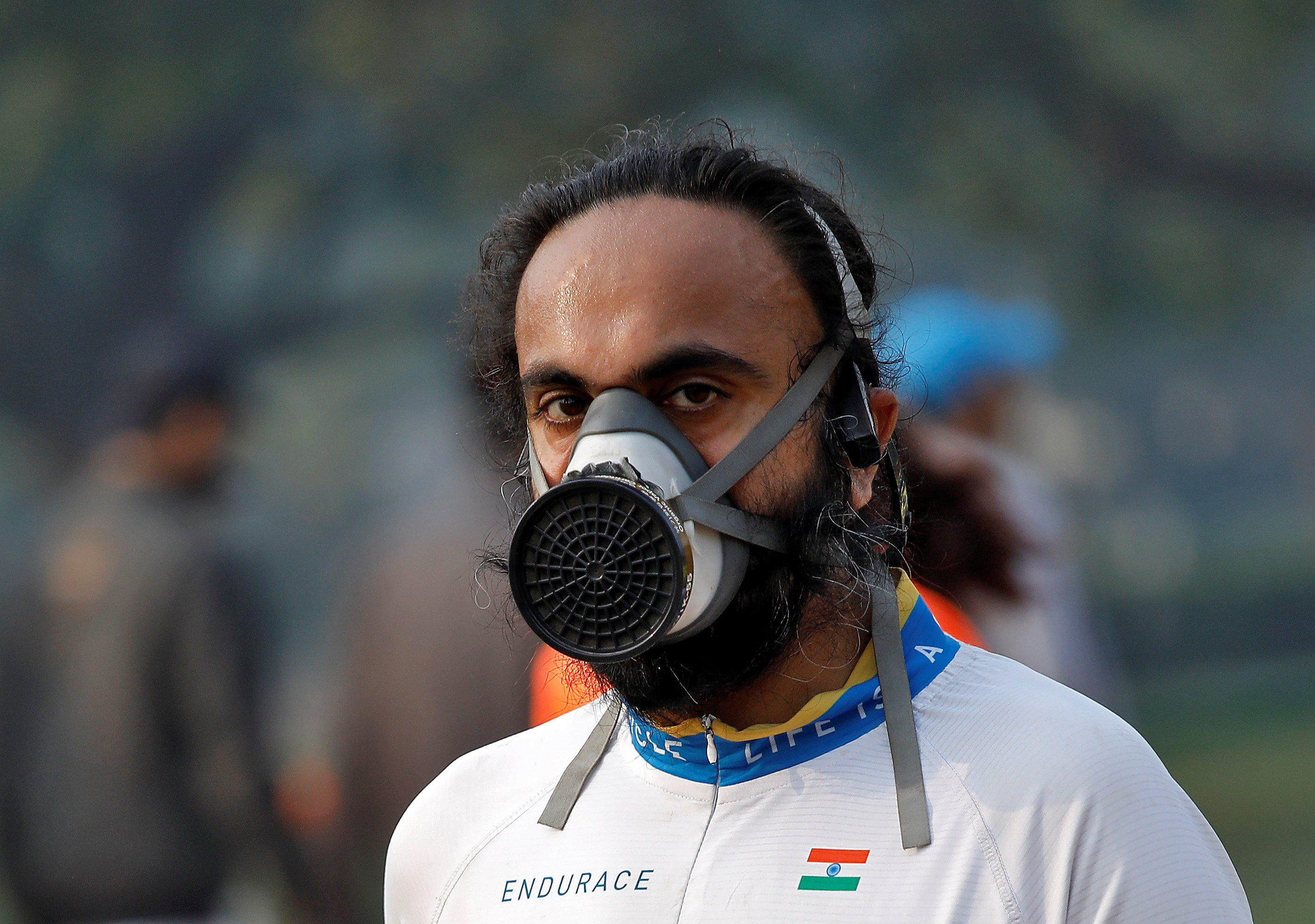 NEW DELHI -- This month in New Delhi, the air has been so acrid that people have suffered from burning eyes and rasping throats. So the notion that thousands would take to the city streets to gulp down lungful after lungful in a distance race may seem strange to many.

But even as India's polluted air threatens health, the nation seems to be embracing the idea of physical fitness.

On Sunday, the Airtel Delhi Half Marathon went ahead, despite the Indian Medical Association taking last-minute court action seeking to have it postponed.

In the cool half-light before dawn, street folk stoked smoking piles of trash to keep warm while race organizers adjusted placards along the route.

In the start area, runner Sunil Baxi, who traveled 11 hours by train from the city of Jodhpur to compete, spoke over the blaring motivational music, saying he was thankful the air had gotten clearer.

"The gods have sent in the rain yesterday and over the last 48 hours," he said. "So it's a blessing for us."

Air pollution has previously been an issue for the running event but was brought into sharp focus this month after air-quality readings in New Delhi spiked to 75 times the level considered safe by the World Health Organization.

As runners glided past some of New Delhi's landmarks like India Gate, they were treated to an unusual peacefulness on the streets. Blaring horns were replaced with slapping feet and enthusiastic drumming from supporters. A Sikh group stood in matching shirts, urging the runners on.

Still, many runners remained frustrated. Ashish Shakya said he'd barely been able to train over the past month because the air quality had been so poor. He wore a handmade sign on his back that read, "Running is in the air but the air is highly polluted."

"I feel that as a community we need to stand up and just acknowledge the existence of the pollution," he said. "In most countries, including China, it would be a state of alert. In India, we are running a half marathon."

Shakya, 31, said he loves running and has watched its popularity in New Delhi soar over the past few years. But he also worries about what it's doing to him.

"It's just like smoking a cigarette. If you smoke for a year, you don't die," he said. "But if you do running continuously in this weather, the health risks outweigh the health benefits."

New Delhi's air pollution typically gets worse at this time of year as winds die off and the fumes from thousands of vehicles and businesses stagnate. Nearby farmers also burn spent crops and people build street fires as the night air cools.

"The air tastes like smoke. I have a constant irritation in my throat," Rakesh Kumar, 45, told CBS News earlier this month.

In early November, hospital outpatient departments and clinics were packed with women, children and men who were wheezing, coughing and breathless, BBC News reported.

Race organizers took extra measures this year to try to combat the problem. They washed down the course with salted water to minimize dust. They used 150 mist fans to try to cleanse the air. They kept vehicles from the route for hours before the race. And they offered refunds to those who wanted to pull out.

Race Director Hugh Jones said he was surprised at the court action and felt it had come too late.

"There comes a point when you're halfway down the springboard and you've just got to keep going," he said. "I think the choice has to be given to people to make their own minds up."

However, organizers are seeking to change the date for next year's event. The difficulty they face is finding a time of year in New Delhi when the heat isn't oppressive, there are no monsoons and the pollution is low.

Some 35,000 runners signed up for this year's event, which also included shorter distances. Organizers say more than 1 million people have signed up for races across India over the past year, and the popularity of the sport is increasing.

"Slowly the trend is rising," said Baxi, the runner from Jodhpur. "No doubt India is on the back foot on health parameters, but slowly and surely it's picking up."

The cost of registration alone means that such events are restricted to wealthier residents of India, where more than 20 percent of the 1.3 billion people live on less than $2 a day.

Jones said he thinks endorsement from stars in the Bollywood film industry has helped give running a boost.

"It's become an appealing sport for aspiring people," he said.

But outside the running route, road closures seemed to bring New Delhi's already chaotic traffic to a standstill. Auto-rickshaws weaved down alleys and squeezed between belching buses as the city slowly got moving again.

This year's competitors were finished and dispersing, leaving New Delhi's bad air to the locals, whose lungs must deal with it every morning, noon and night.