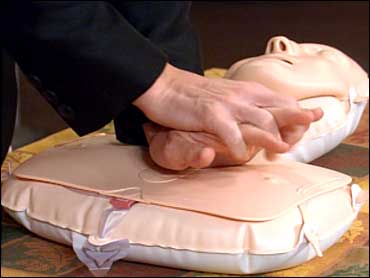 The revised guidelines issued Monday by the American Heart Association on cardiopulmonary resuscitation advise giving 30 chest compressions — instead of 15 — for every two rescue breaths.

"Basically, the more times someone pushes on the chest, the better off the patient is," said Dr. Michael Sayre, an Ohio State University emergency medicine professor who helped develop the new guidelines.

"You have to make up for that lost ground," she said. "We think that the fewer the interruptions, the better for blood flow."

The guidelines also recommend cooling cardiac arrest patients for 12 to 24 hours to about 90 degrees Fahrenheit. Two significant studies have shown that practice can improve survival and brain function for those who are comatose after initial resuscitation.

More than 300,000 Americans die each year of cardiac arrest, when the heart suddenly stops beating. The heart association estimates that more than 95 percent of cardiac arrest victims die before they get to the hospital.

Studies show that the chest compressions create more blood flow through the heart to the rest of the body, buying time until a defibrillator can be used or the heart can pump blood on its own. Studies have also shown that blood circulation increases with each chest compression and must be built back up after an interruption, the association says in its online journal Circulation.

The new guidelines also cut down on the number of times a rescuer needs to use a defibrillator and they advise rescuers not to stop after giving two rescue breaths to check for signs of circulation before starting compressions. The bottom line advice is to focus on the chest compressions.

Studies show that the first shock works more than 85 percent of the time.

Defibrillators have been popping up in public places like airports and businesses, but the heart association says that more public places need to install the devices. Survival rates have been as high as 49 to 74 percent for lay rescuer programs when defibrillators are placed in casinos, airports or used by police.

The guidelines also urge that 911 operators be trained to provide CPR instructions by phone.

"For the bystander that witnesses a collapse, the main danger is inaction," Sayre said. "We believe there is very little downside to trying to attempt a resuscitation."

According to the heart association, about 75 percent to 80 percent of all cardiac arrests outside a hospital happen at home, and effective CPR can double a victim's chance of survival.

Sudden cardiac arrest can occur after a heart attack or as a result of electrocution or near-drowning. It's most often caused by an abnormal heart rhythm. The person experiencing it collapses, is unresponsive to gentle shaking and stops normal breathing.

"The most common reason many people die from cardiac arrest is no one nearby knows CPR," Sayre said.

The new guidelines provide an opportunity for those who have taken CPR in the past to take a refresher course, said Dr. Ahamed Idris, professor of surgery and medicine at the University of Texas Southwestern Medical Center.

"I think it's a good idea for people to take CPR lessons at least every couple of years," said Idris, also involved in creating the guidelines.

Hazinski said that she expects the new guidelines will be disseminated over the next few months to those who teach CPR.

The heart association says that currently about 9 million Americans a year are trained in CPR, but the association has a goal of more than doubling that number in the next five years to 20 million.

"The bottom line is we think more people need to learn CPR," Hazinski said. "We have more and more evidence that good CPR works. We're doing our best to increase the number of bystanders that learn CPR."