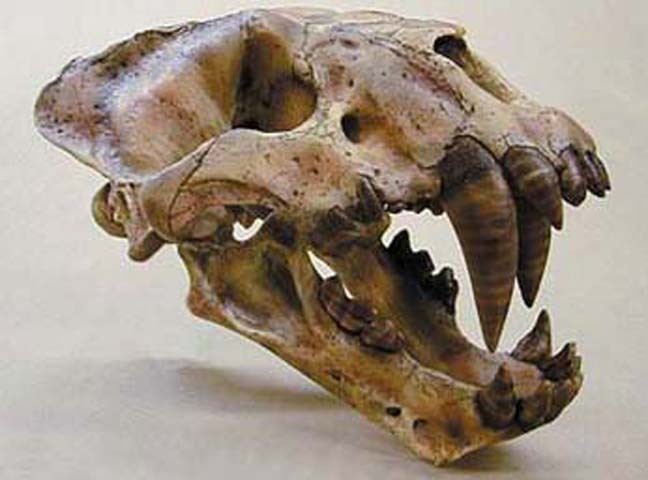 A new type of saber-toothed cat has just been revealed: the "cookie-cutter cat," whose name comes from how it chomped large, clean chunks of flesh from its prey.

Saber-toothed cats once roamed the world for millions of years, downing prey with giant dagger-like fangs. These felines would have needed to open their jaws wide to gulp down food.

"It had to have lips that could stretch to allow the jaws to open wide, so the lips must have been bigger and looser than modern cats," said researcher Virginia Naples, a vertebrate paleontologist and comparative anatomist at Northern Illinois University. "It probably had jowls like a St. Bernard, and probably drooled like one, too."

New cat on the block

Scientists had known the Americas were once home to two kinds of saber-toothed cats -- dirk-toothed  and scimitar-toothed. These felines differed in the length of their fangs and the build of their bodies.

The most famous dirk-toothed cat is likely Smilodon, often erroneously known as the saber-toothed tiger, although it was not a close relative of the modern predator. Dirk-tooths had long, finely serrated canines and short-legged muscular bodies resembling that of a bear. The heavy builds of these felines meant they could not run very quickly for more than a short distance -- they probably ambushed their prey.

Scimitar-toothed cats, on the other hand, were predators that relied on speed to catch prey, including baby mammoths weighing as much as a ton. With long-legged bodies like cheetahs and shorter, more coarsely serrated canines than their dirk-tooth cousins, they lived across North America, Europe and Asia.

Now Naples and her colleagues reveal a third kind of American saber-toothed cat, the cookie-cutter cat, exemplified by a species known as Xenosmilus hodsonae that lived about 1 million years ago. "Xenosmilus" means "strange blade," while "hodsonae" refers to Debra Hodson, the wife of a man working on the fossil.

Two fairly complete adult skeletons of the newfound cat were recovered in the early 1980s from a north-central Florida gravel pit. Amateur collectors thought they had the skull of scimitar-tooth cat and the skeleton of a dirk-tooth. It was only when Naples and her colleagues began studying the fossils in the late 1990s that it became apparent they represented something previously unknown.

"It was really very exciting discovering the actual identity of this animal," Naples told LiveScience.

Naples suggested this particular type of saber-tooth would have likely been an ambush predator that killed its prey by biting it repeatedly until its victim went into shock from loss of blood. The area in which Xenosmilus was found is littered with the bones of pig-like animals known as peccaries that would have served as its likely prey, enough so that the area was known as "Hog Heaven" by fossil collectors, Naples said.

It remains uncertain just how far Xenosmilus ranged, although there are hints that it might have once dwelled in New Mexico and northern South America. "We're hoping of course that we'll find more specimens," Naples said.

This novel feline is revealed in a new book on saber-toothed cats, "The Other Saber-tooths: Scimitar-tooth Cats of the Western Hemisphere" (Johns Hopkins University Press, 2011). Based on nearly 10 years of research, it features the latest information on scimitar-tooth cats, reconstructing what they might have looked like and how they captured and killed prey, Naples said.