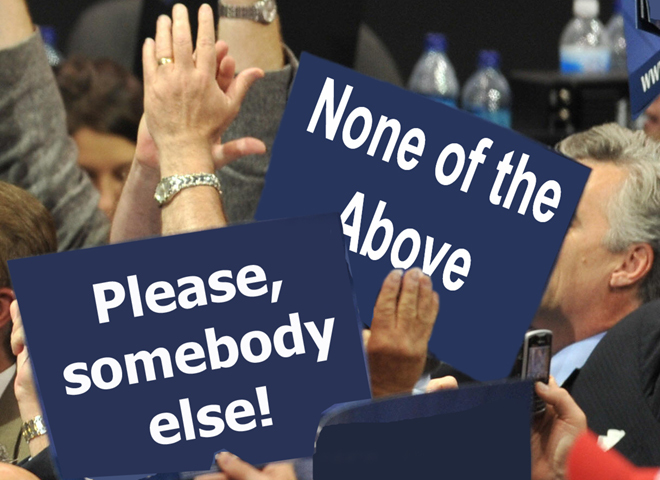 (AP) CARSON CITY, Nev. - Nevada's "none of the above" voting option will be on the November ballot following an emergency stay sought by the secretary of state's office and granted by a federal appeals court.

A three-judge panel of the 9th U.S. Circuit Court of Appeals in San Francisco blocked the injunction Tuesday and had strong words for U.S. District Judge Robert Jones, who last month declared the voting option unconstitutional and struck it from the ballot.

Poll: 1 in 5 say Eastwood was highlight of RNC
National debt passes $16 trillion: Should you worry?

One appellate judge accused Jones, chief judge in Nevada, of deliberate foot-dragging by delaying hearings in the case and not issuing a written order in time for state lawyers to appeal before ballots must be printed.

"His dilatory tactics appear to serve no purpose other than to seek to prevent the state from taking an appeal of his decision before it print the ballots," 9th Circuit Judge Stephen Reinhardt wrote.

He concluded: "Such arrogance and assumption of power by one individual is not acceptable in our judicial system."

Jennifer Lopez, spokeswoman for the Nevada attorney general's office, said Wednesday that the ruling means the choice that appears as "none of these candidates" in statewide races will on the November 2012 ballot, though the court appeals will continue.

A lawsuit backed by the Republican National Committee sought to get rid of Nevada's unique "none" voting choice. The GOP fears "none" could siphon votes from the Republican candidates in what are expected to be tight presidential and U.S. Senate races.

Nevada is the only state in the nation that since 1976 has given voters the option to vote for "none" in races decided by voters statewide — president, U.S. Senate, state constitutional officers and state Supreme Court. It was enacted as a way to combat voter apathy after the Watergate scandal that brought down President Richard Nixon — and give voters a way to register disdain for the political environment.

In a polarized political climate and an electorate soured on politics, opponents believe "none" gives voters an out from making a choice, and that such voters would be more inclined to vote for a challenger — such as Mitt Romney — if "none" was eliminated.

Under Nevada law, "none" can never win even if it receives the most votes, though it never has in a general election contest. Victory is reserved for people, though "none" before has played a role in determining the winner in some high-profile races. In 1998, Democratic U.S. Sen. Harry Reid defeated then Republican Rep. John Ensign by 428 votes, but more than 8,000 voters rejected both men and opted for "none."

Last month, Jones said the law was unconstitutional because votes for "none" don't count in the final tallies that determine winners. He issued a verbal ruling from the bench Aug. 22, but has yet to file a written order and refused to stay his decision pending appeals, despite pleas from state attorneys that ballots need to be finalized by Sept. 7 to be printed in time to mail to voters overseas.

Deputy Attorney General Kevin Benson, representing Secretary of State Ross Miller, filed an emergency appeal with the 9th Circuit, and Jones in the meantime scheduled oral arguments on the stay for Sept. 14 — a week after the printing deadline.

It's not clear whether that hearing will proceed, now that the 9th Circuit has stepped into the case.

In the 9th Circuit order granting the stay, Reinhardt said it was likely the state would prevail in its appeal and that not issuing a stay "would accordingly result in irreparable injury" to Nevadans and "be directly contrary to the public interest."

Reinhardt noted the judge initially assigned to the case withdrew June 11, and it took Jones until July 3 to reassign the case to himself. It was another three weeks before a hearing date was set for Aug. 22.

Reinhardt said if the 9th Circuit didn't intervene it "would allow the district court to erroneously invalidate Nevada's long-standing election process" and deprive Nevadans the right to participate in presidential elections "in the manner that the law prescribes."

Woman shot and killed while pushing baby stroller in NYC
Thanks for reading CBS NEWS.
Create your free account or log in
for more features.
View CBS News In
CBS News App Open
Chrome Safari Continue
Be the first to know
Get browser notifications for breaking news, live events, and exclusive reporting.