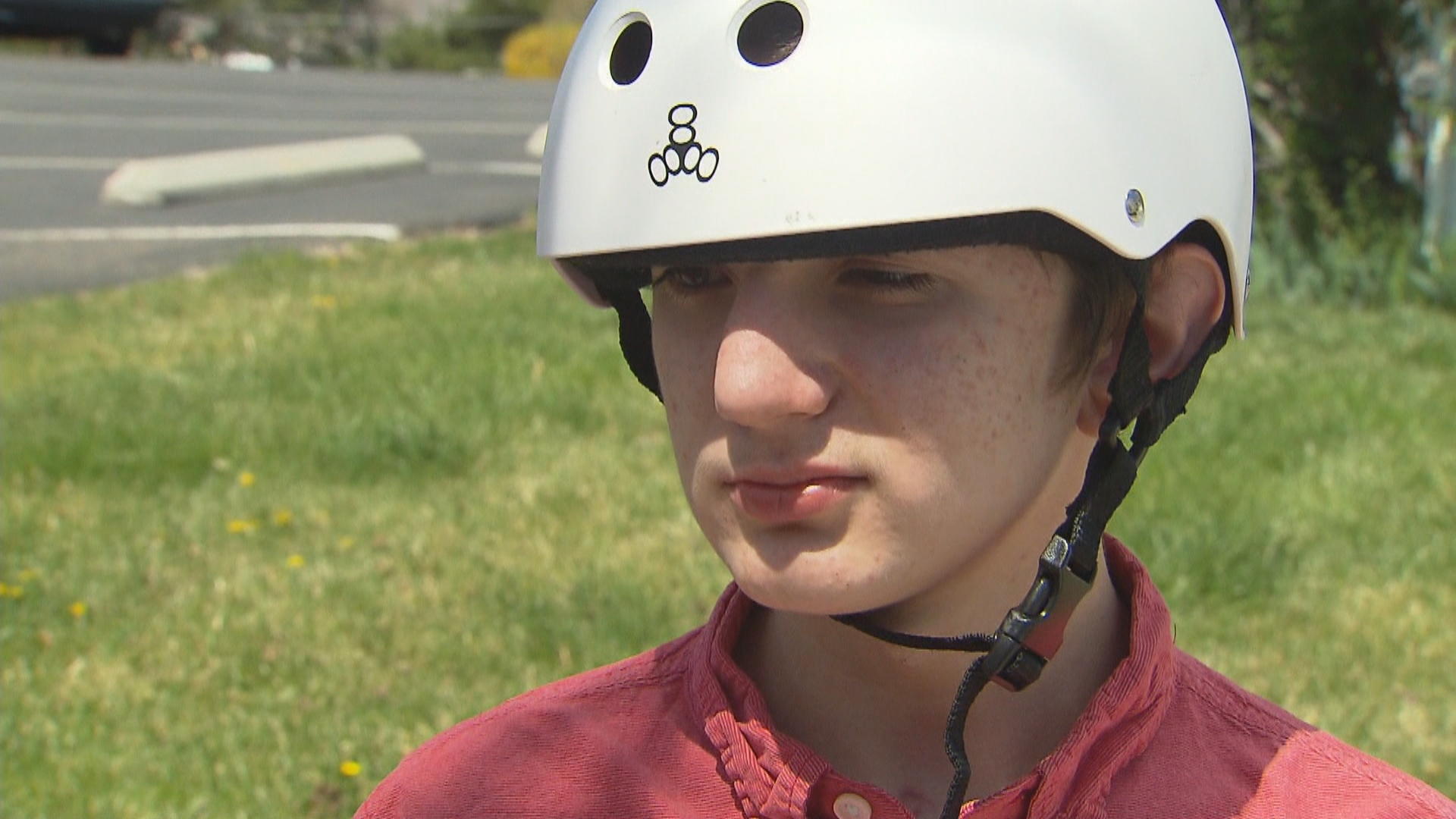 RENO, Nev. -- The Nevada teenager who was shot by a school police officer is speaking out for the first time about what happened. Cell phone video captured Logan Clark waving two knives into a crowd of students at Hug High School. Moments later, a school district officer fired a single shot.

A subsequent stroke in the hospital left him with severe brain trauma, impacting his speech and requiring him to wear a helmet for protection.

While talking is tough for Clark these days, he has no trouble remembering the morning of December 7.

“When you went to school that day, did you feel like you had to protect yourself?” CBS News correspondent Mireya Villarreal asked Clark.

“Yeah,” he responded in an interview you’ll see only on “CBS This Morning.”

Clark’s mother and grandmother said he took the weapons to school after repeated bullying.

“When you hear people say that bringing a knife to school isn’t the answer to bullying, how do you respond to that?” Villarreal asked.

“It’s not the answer. But to a 14-year-old kid, I guess it is the ... you know, not to hurt anybody with the knives, but just to get them off of you,” said his grandmother, Nancy Pitchford.

“I’m not defending my son bringing knives to school whatsoever,” Clark’s mother, Cheryl Pitchford said. “But what I ask myself is, what makes the school officer think that it’s okay to shoot my son?”

The Reno police department said Clark had been involved in a fight with another student that day and that the school district officer opened fire after the teen acknowledged him and ignored commands to drop the knives.

“I do not believe that environment would allow Logan to have heard the police officer,” family attorney David Houston said.

A day after the shooting, Washoe County Schools superintendent Traci Davis praised responding officers for keeping the other students safe.

“Had it not been for their quick actions and professionalism, I truly believe that the outcome could have been much worse,” Davis said last December.

“Why not use a Taser? … Why not shoot him in the foot?” Nancy Pitchford asked. “And having other kids standing around behind Logan and could’ve struck another kid.”

The name of the officer has not been released, and in a statement the school district told CBS News: “Because the incident in question is still under investigation by an outside police agency, we are unable to provide any information at this time.”

Clark said he misses school and his friends, but he doesn’t want to go back.

Officials are now conducting two separate investigations to determine whether the shooting was justified and if charges should be brought against the school officer or the student.

“With that possibility out there, how do you respond to that?” Villarreal asked.

“That you know being shot and almost dying, that would be kind of like punishment enough,” Nancy Pitchford said.