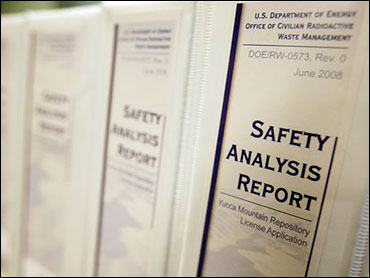 The Bush administration moved a step closer to building a nuclear waste dump at Yucca Mountain in Nevada on Tuesday, filing a formal application for a construction license.

The Energy Department sent the application to the Nuclear Regulatory Commission, which will have three years to review it, and scheduled a news conference for later in the day on the application submission.

NRC spokesman Eliot Brenner said the application was received by the agency along with boxes of supporting documents. A truck delivered the documents to the NRC's office in Rockville, Md. The application itself covers 17 volumes.

The NRC's primary job will be to determine whether the proposed repository's design will protect public health, safety and the environment for up to a million years.

President Bush gave the go-ahead for the Yucca waste repository, 90 miles northwest of Las Vegas, six years ago. It is being designed to hold 77,000 tons of waste, mostly used reactor fuel from nuclear power plants.

About $6 billion has been spent in research and engineering at the Nevada site, including construction of a tunnel deep into the volcanic rock where the canisters of used reactor fuel are to be placed.

But the Yucca project has seen years of turmoil as projected completion dates have been pushed back repeatedly and the project's license application - a critical step in the process - delayed. Department officials now say they hope to have the underground site completed by about 2020.

The application prepared for the NRC still lacks a key element: a final public radiation exposure standard that has yet to be completed by the Environmental Protection Agency. The standard will be added later when the EPA completes it.

In a notification sent to Rep. Shelley Berkley, D-Nev., the department called the license application "an important milestone for all Americans" and noted that a 1982 law on nuclear waste required the federal government to consolidate used reactor fuel being stored at commercial power plants.

Similar notifications were sent to other lawmakers.

Berkley and other Nevada politicians have been adamant in trying to block construction of the Yucca Mountain dump, arguing that the Energy Department has yet to prove that the waste can be kept there safely.

Senate Majority Leader Harry Reid of Nevada has made sure the Energy Department doesn't get the money it wants for the program. Reid has called the Yucca project "a dying beast" and said he hoped the budget cuts "will drive the final nail into its coffin."

This year Congress provided $386.5 million for the program, $108 million less than the Bush administration had wanted as it geared up for submitting its application for a construction license. In 2007 the project received $444 million.

The federal government under the 1982 law is contractually required to accept the spent fuel from commercial power plants. It was supposed to have a central repository available for fuel shipments by 1998.

Reid and other Nevada officials say the waste ought to stay where it is until the best long-term solution for dealing with it can be determined.