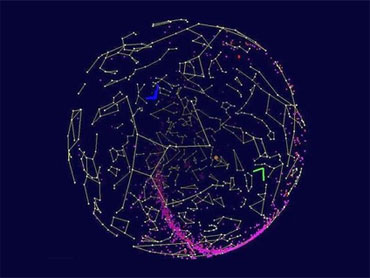 Ordinary computers like those folks use to send e-mail or surf the Internet are being credited with finding a previously unknown neutron star.

It was the first scientific discovery for the project, known as Einstein(at)Home, that uses spare computer power donated by 250,000 volunteers in 192 countries, according to Bruce Allen, director of effort.

"This is a thrilling moment for Einstein(at)Home and our volunteers. It proves that public participation can discover new things in our universe," said Allen, who is director at the Max Planck Institute for Gravitational Physics in Germany and adjunct professor of Physics at the University of Wisconsin-Milwaukee.

The finding of the new pulsar was reported Thursday in Science Express, the online version of the journal Science.

Data collected by the giant radio telescope at Arecibo Observatory in Puerto Rico are divided among the home computers for analysis and the results are fed back researchers based at the Cornell Center for Advanced Computing, the Albert Einstein Institute in Hannover, Germany and the University of Wisconsin-Milwaukee.

The data sent to home computers is tagged with an identifying number so the researchers can determine which one first makes any actual discovery.

In this case the pulsar was first identified June 11 by a computer owned by Chris and Helen Colvin of Ames, Iowa, and was confirmed three days later on the computer of Daniel Gebhardt of Mainz, Germany.

The Colvins work in information technology for private businesses while Gebhardt works on computerized music at the University of Mainz.

Because the work is done in the background on their machines, neither the Colvins nor Gebhardt realized they were part of a discovery until they were informed by Allen.

Allen said that, since this discovery, the project has also found a new paired star system, but hasn't learned enough about it to discuss in detail. That find, he said, was made by home computers in the United Kingdom and Russia.

New evidence that IQ is not set in stone