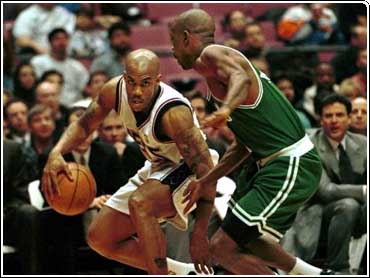 The New Jersey Nets had one of those game that made Boston Celtics coach Rick Pitino think his team was trying out to be a patsy for Harlem Globetrotters.

The Nets made 17 of 24 shots from the field and scored a team-record 46 points in the first quarter en route to a 131-113 laugher over the Celtics on Tuesday night.

Stephon Marbury and Keith Van Horn had 30 points apiece as New Jersey opened a 23-point lead after 12 minutes and then never looked back in beating Boston for the first time in four games. The points were an NBA high for a first quarter this season.

"We didn't have the ability to stop them," Pitino said. "We got too far down too early and they were playing too well. They were brilliant on offense and our defense was atrocious.

"Our guys looked like they were auditioning to play the Washington Generals in the next Harlem Globetrotters' movie, and our guys would all get starring roles."

Kendall Gill, who added 19 points, said the Nets wanted this game after blowing leads to Boston in their last two meetings.

"It was embarrassing losing these last two games to these guys," Gill said. "We just didn't want to lose again."

Kerry Kittles had 16 as New Jersey won its second straight and handed Boston its 19th loss in 23 road games. Marbury made 10 of 12 shots from the field.

Boston was led by Antoine Walker, who had 27 points before being ejected for two technicals in the fourth quarter.

The Nets' final point total and their 58 percent shooting from the field (47 of 81) were season highs; the total was the most given up by oston this season.

After that, New Jersey didn't miss much, making 10 of its next 11 shots, including seven straight, to open a 24-12 lead. Marbury hit three jumpers in that spurt, while Van Horn picked up nine points, mostly inside.

Marbury had 14 in the quarter and Van Horn and Gill added 11 apiece.

"We put up a stand early in the game, letting them know we're not here to mess around. We need a W and we're coming to take it," Nets backup forward Scott Burrell said.

The Nets, who have given away the lead in each of their last nine losses, built a 29-point margin in the second quarter and then seemed to tease the crowd, letting Boston cut the gap a couple of times: 17 at the start of the third quarter and 15 midway through the fourth quarter.

However, each time the Nets got a couple of showtime dunks from Van Horn, Kittles and even a windmill by Marbury off a steal.

"The last two wins, we won the way we're supposed to," McIlvaine said. "We got the early lead and held on to it by making the plays and playing good defense."