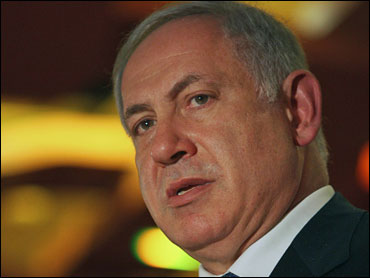 Israel's incoming prime minister, Benjamin Netanyahu, on Wednesday promised to resume peace talks with the Palestinians after he takes office, saying his government will be a "partner for peace."

The comments were the latest sign that Netanyahu is trying to temper his image as an opponent of the peace process. The Palestinians welcomed Netanyahu's words, but said his words must be matched by actions.

Netanyahu led his Likud Party to a strong showing in last month's parliamentary election by campaigning on a message that was harshly critical of the outgoing government's peace efforts. He said the Palestinians were not ready for independence, and said he would limit his efforts to developing their economy while continuing Israel's military occupation of the West Bank.

But facing the prospect of a clash with the Obama administration and the rest of the international community, Netanyahu has been softening his line in recent days.

Speaking at an economic conference in Jerusalem, Netanyahu said his development plan is not a substitute for political negotiations. "It's a complement to them," he said, calling a strong economy a "strong foundation for peace."

Netanyahu said that peace is a "common and enduring goal for all Israelis and Israeli governments, mine included. This means I will negotiate with the Palestinian Authority for peace."

"I think that the Palestinians should understand that they have in our government a partner for peace, for security, for the rapid development of the Palestinian economy," he added.

During a prime-time news conference Tuesday night, President Obama said finding peace between Israel and the Palestinians is, "not easier than it was, but I think it's just as necessary."

"We don't yet know what the Israeli government is going to look like, and we don't yet know what the future shape of Palestinian leadership is going to be comprised of," the president said. "What we do know is this: that the status quo is unsustainable, that it is critical for us to advance a two-state solution where Israelis and Palestinians can live side by side in their own states with peace and security." (Read more on Obama's comments on the Mideast.)

Netanyahu spoke just hours after the centrist Labor Party voted to join his coalition. The addition of Labor gives a moderate voice to what had been shaping up to be a narrow, hawkish coalition. Labor led the country for decades, and signed previous peace agreements with the Palestinians and Jordan in the 1990s.

In order to court Labor, Netanyahu promised to maintain peace negotiations. However, their deal was ambiguous about what exactly Netanyahu is prepared to offer.

Most critically, it does not explicitly call for the establishment of an independent Palestinian state on captured lands now occupied by Israel, including the West Bank. Netanyahu has said he will allow existing Jewish settlements in the West Bank to expand.

"Any Israeli government that accepts the two-state solution, negotiates with us on all core issues without exception, and agrees to stop settlement activity ... will be a partner," he said. "It's time for deeds from both sides as far as their commitments are concerned, not words."