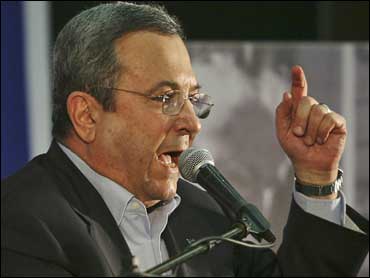 Israel's Labor Party voted Tuesday to join the incoming government of Benjamin Netanyahu, giving a centrist tone to the coalition that has looked hard-line up to now.

Party secretary Eitan Cabel announced the results of the voting after a heated debate - 680 in favor and 507 against.

But others chanted slogans like "Disgrace" after the announcement.

Netanyahu has signed coalition agreements with Yisrael Beitenu and Shas, two parties known for their tough policy lines toward the Palestinians, as is Netanyahu's own Likud Party. Labor, in contrast, has been in the forefront of Mideast peace efforts.

Labor's 13 seats in the parliament would give Netanyahu a majority of 66 in the 120-seat house. But there is a possibility that the party could split as a result of the vote, and some members might choose to remain in the opposition.

"I think that in terms of principles it will be hard for us to work together, and I assume the government and Benjamin Netanyahu aren't deluding themselves that they're going to get our support," lawmaker Amir Peretz, who opposed joining the government, told Channel 1 after the vote.

"I won't be anyone's fig leaf or anyone's third wheel," Barak told the crowd ahead of the vote. "We will be the counterweight that will guarantee that we won't have a narrow right-wing government, but a real government that will take care of the state of Israel."

Netanyahu has been a vocal critic of the outgoing government's peace talks with the Palestinians, saying conditions are not ripe for a deal. He has so far wrapped up deals with two hard-line coalition allies.

But he appeared to be soften his line as he courted moderates. A broader coalition would bring stability to the government because it would not be hostage to the demands of smaller partners. It also would enjoy more international credibility with some members committed to peace talks.

Under the proposed coalition deal with Labor, Israel would draft a comprehensive plan for Mideast peace, resume peace talks and commit itself to existing peace accords, Labor officials said. Barak would continue serving as defense minister and other veteran Labor lawmakers would be assured ministerial jobs.

Barak initially declared the party would serve outside the government as a "responsible, serious and constructive opposition."

But with his own personal fortunes inside the party in question and Netanyahu eager to soften the hard-line edge the current coalition lineup projects, Barak has switched gears. He says Israel would be better served by a broad government including Labor than a narrow coalition of hard-liners.

Labor dominated Israel's political and economic life for the first half of its history and was the party that signed peace accords with the Palestinians and Jordan. But its fortunes have sagged and its presence in parliament was whittled down from 19 seats to just 13 in the Feb. 10 elections.

The Labor decision will not directly affect a tentative deal giving the foreign minister's job to the head of the hard-line Yisrael Beiteinu party, Avigdor Lieberman, who has drawn criticism for proposing that Arab citizens of Israel sign loyalty oaths or lose their citizenship.

Labor is not seeking the foreign minister's post. But if it succeeds in softening the government's platform, the more moderate Kadima Party led by current Foreign Minister Tzipi Livni could agree to join and she could possibly retain her post.

So far, she has refused to team up with Netanyahu. She wants him to commit to peace talks or to let her serve as prime minister for half of the government's term.

Netanyahu has until April 3 to form his coalition. He hopes to take office next week, replacing Ehud Olmert, who announced in September that he would resign to battle a series of corruption allegations.