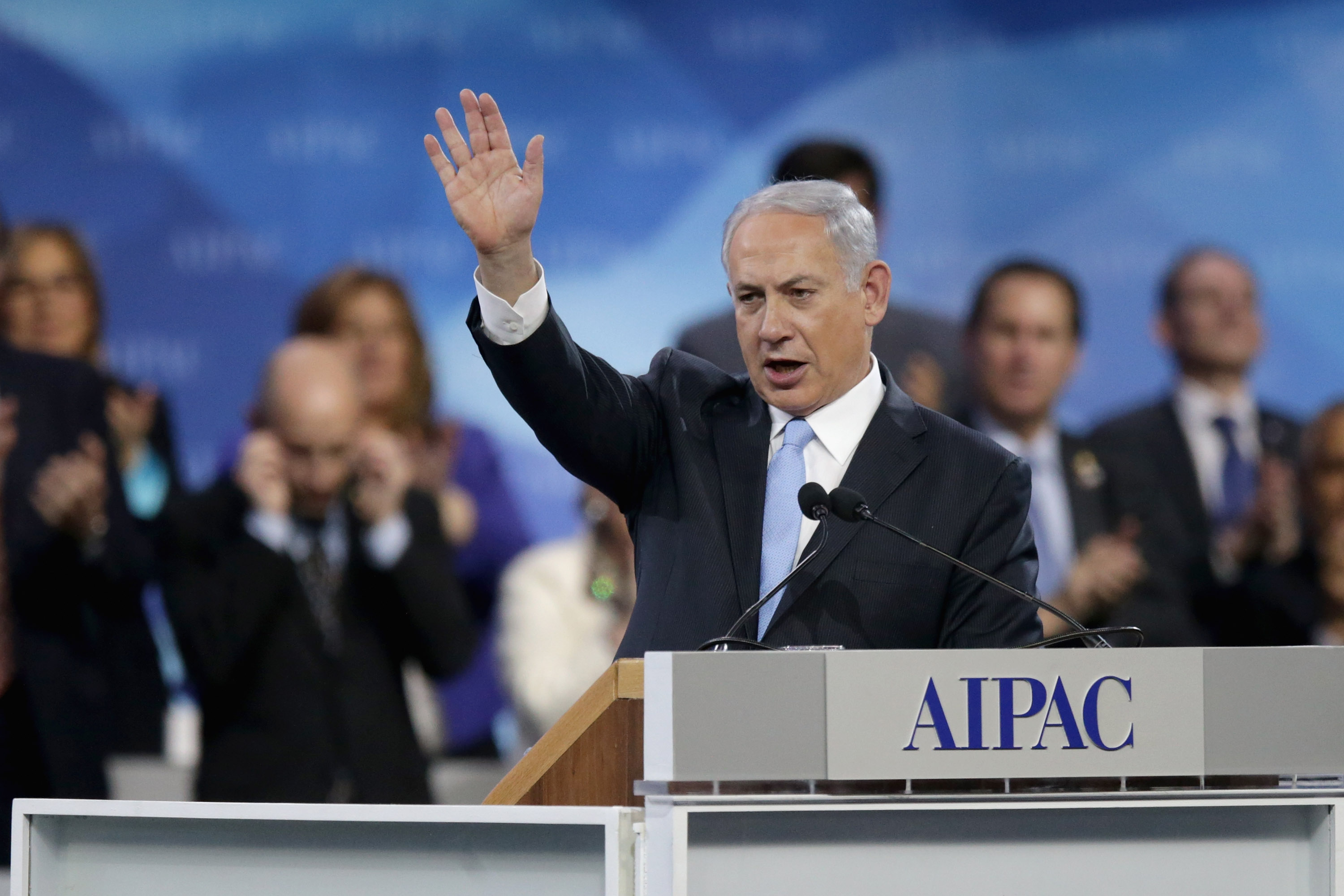 WASHINGTON Israeli Prime Minister Benjamin Netanyahu said Tuesday that reassuring words from Iranian officials about not wanting nuclear weapons do not square with Tehran's actions - and that the international community needs to exert more pressure to deny Iran the capability of making nuclear arms.

In a speech at the pro-Israel American Israel Public Affairs Committee's annual policy conference, Netanyahu also had a message for Palestinian President Mahmoud Abbas: "Recognize the Jewish state. No excuses, no delays, it's time."

The Israeli leader also denounced as anti-Semitic the Palestinian-led movement of boycott, divestment and sanctions, known by its acronym, BDS. The boycott has been growing recently, mainly in Europe, where some businesses and pension funds have cut investments or trade with Israeli firms they say are connected to West Bank settlements.

"Those who wear the BDS label should be treated exactly as we treat any anti-Semite or bigot," Netanyahu said. "They should be exposed and condemned. The boycotters should be boycotted."

On Iran, Netanyahu is fighting an uphill battle. Six world powers, including the U.S., recently reached a diplomatic agreement with Iran that rolls back its nuclear program in exchange for some easing of economic sanctions that have crippled Iran's economy. Israel sees Iran's nuclear program as an existential threat and fears Tehran is using negotiations toward reaching a final agreement as a way to stall while it continues to build nuclear arms.

Iran "wheels out its smiling president and its smooth-talking foreign minister. But if you listen to their words, their soothing words, they don't square with Iran's aggressive actions," Netanyahu said.

He warned that any final agreement that allows Iran to remain a threshold nuclear power could have disastrous consequences around the globe.

"If we allow this outlaw terrorist state to enrich uranium, how could we seriously demand that any other country not enrich uranium?" Netanyahu asked. "I believe that letting Iran enrich uranium would open up the floodgates, it would really open a Pandora's box of nuclear proliferation in the middle east and around the world. That must not happen and we will make sure it does not happen," he said.

He also that more pressure on Iran, rather than relieving any sanctions, is the key to ending its nuclear program -- a possible nod to U.S. lawmakers who are still working to pass conditional sanctions that would take effect if Iran fails to reach a deal with world powers or does not live up to the terms laid out during the interim agreement.

On the Palestinian issue, Netanyahu said that by recognizing a Jewish state, Abbas would be telling his people that while there might be a territorial dispute, the right of the Jewish people to a state of their own is beyond dispute.

"No excuses, no delays. It's time," Netanyahu said. And while he said he was prepared to make a "historic" peace with the Palestinians, any peace would need to be backed by a strong Israeli army that could fend off attacks.

"This position may not win be universal praise. That occasionally happens when I stake out positions, but I'm charged with protecting the security of my people, the people of Israel, and I will never gamble with the security of the one and only Jewish state," he said.

In reaction to Netanyahu's visit to the U.S., Palestinian official Hanan Ashrawi told The Associated Press that the Israeli leader went to Washington "ready to allocate blame without, in any way, showing any sign of willingness to do the right thing - to stop settlement activities, accept `67 borders, accept signed agreements, end illegal actions and move ahead. Instead, he is reiterating his ideological condition of recognition of a Jewish state."

The Palestinians argue that embracing Israel as a Jewish state would amount to giving up the dreams of Palestinian refugees to return to lost properties - the so-called "right of return" which is a central sticking point in peace talks. They also say it would undermine the rights of Israel's own Arab minority, the 20 percent of Israel's 8 million people who are themselves ethnic Palestinians.

The Palestinians seek the West Bank, east Jerusalem and the Gaza Strip - territories captured by Israel in 1967 - for an independent state. They have demanded that Israel agree to base the final borders with a future Palestine on the pre-1967 lines, with small land swaps that would allow Israel to keep some of the Jewish settlements it has built in the West Bank and east Jerusalem. New Israeli housing statistics showed that Israel began building more than twice as many West Bank settlement homes in 2013 than it did the previous year. The Palestinians consider settlements built on territories captured by Israel in 1967 to be illegal and an obstacle to peace.