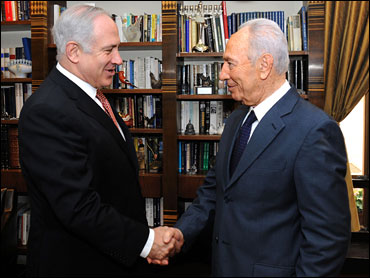 Incoming Prime Minister Benjamin Netanyahu brought a nationalist religious party into his emerging coalition Monday, taking a major step toward securing the parliamentary majority he needs to form a government.

As Netanyahu wrapped up the deal with the ultra-Orthodox Shas Party, he also launched formal coalition talks with the centrist Labor Party in hopes of moderating what is shaping up to be a narrow, hawkish government. Adding Labor could provide stability and international credibility, but many Labor lawmakers oppose joining forces with Netanyahu.

Netanyahu has been trying to put together a coalition since last month's parliamentary election. His Likud Party captured 27 seats, forcing him to bring in partners to control a majority in the 120-seat parliament. He has until April 3 to put together a government.

With Shas on board, a total of 53 of legislators have agreed to enter the government's fold. Netanyahu, who hopes to build a broad coalition, is still negotiating with four other parties.

The deal tentatively gave the foreign minister's job to party leader Avigdor Lieberman, who has drawn accusations of racism for a plan that could require Arab citizens of Israel to sign loyalty oaths or lose their citizenship. Lieberman has also said there is no hope for peace with the Palestinians. Lieberman also favors redrawing Israel's borders to exclude Arab citizens.

Shas' presence would help cement the coalition's tilt the right. The party, which represents Jews of Middle Eastern descent, opposes giving up any part of Jerusalem as part of a future peace deal and doesn't even want the matter discussed in future peace talks.

But Palestinians demand sovereignty over Arab parts of Jerusalem, where around 270,000 Palestinians live, and a peace treaty would be impossible without this demand being met. Israel captured east Jerusalem in the 1967 Mideast war and immediately annexed it.

Shas will join the government in exchange for four Cabinet ministries and added social services allowances that are important to the party's lower-income constituency.

The ministries include the all-important Housing Ministry, which is involved in West Bank settlement construction, and the Interior Ministry, which decides questions of Israeli citizenship.

Shas' spiritual leader is an octogenarian rabbi, Ovadiah Yosef, known as much for his sunglasses, turban and gold-embroidered robes as his sometimes outrageous statements. Hurricane Katrina, Yosef once claimed, was divine punishment for godlessness in New Orleans and U.S. support for Israel's 2005 pullout from the Gaza Strip.

Although Netanyahu takes a tough stand against territorial concessions to the Palestinians and Syria, he has been wooing moderate parties as well to give his government more stability and make it more palatable to the international community.

A narrow government could hold him hostage to unrealistic demands. That is a lesson he learned during his first tenure as prime minister a decade ago, when his coalition fell apart over concessions he made to the Palestinians under U.S. pressure.

A hawkish government could also put him at loggerheads with the U.S., which is eager to promote an Israeli-Palestinian peace deal that would entail the establishment of a Palestinian state. Netanyahu says the Palestinians are not ready for independence.

Because of that position, his most sought-after potential partner has spurned his overtures. Foreign Minister Tzipi Livni, head of the centrist Kadima Party, says she will only serve in a government committed to seeking a final peace agreement with the Palestinians.

Netanyahu appears to be making more headway with Defense Minister Ehud Barak's Labor Party. After initially insisting he would go into the opposition, Barak planned to ask his party on Tuesday to team up with Netanyahu.

But Barak, who authorized Labor negotiators to meet with the Likud on Monday, could face a mutiny when he puts a coalition agreement to a party vote on Tuesday. A significant bloc of party rebels objects to joining a Netanyahu-led government.