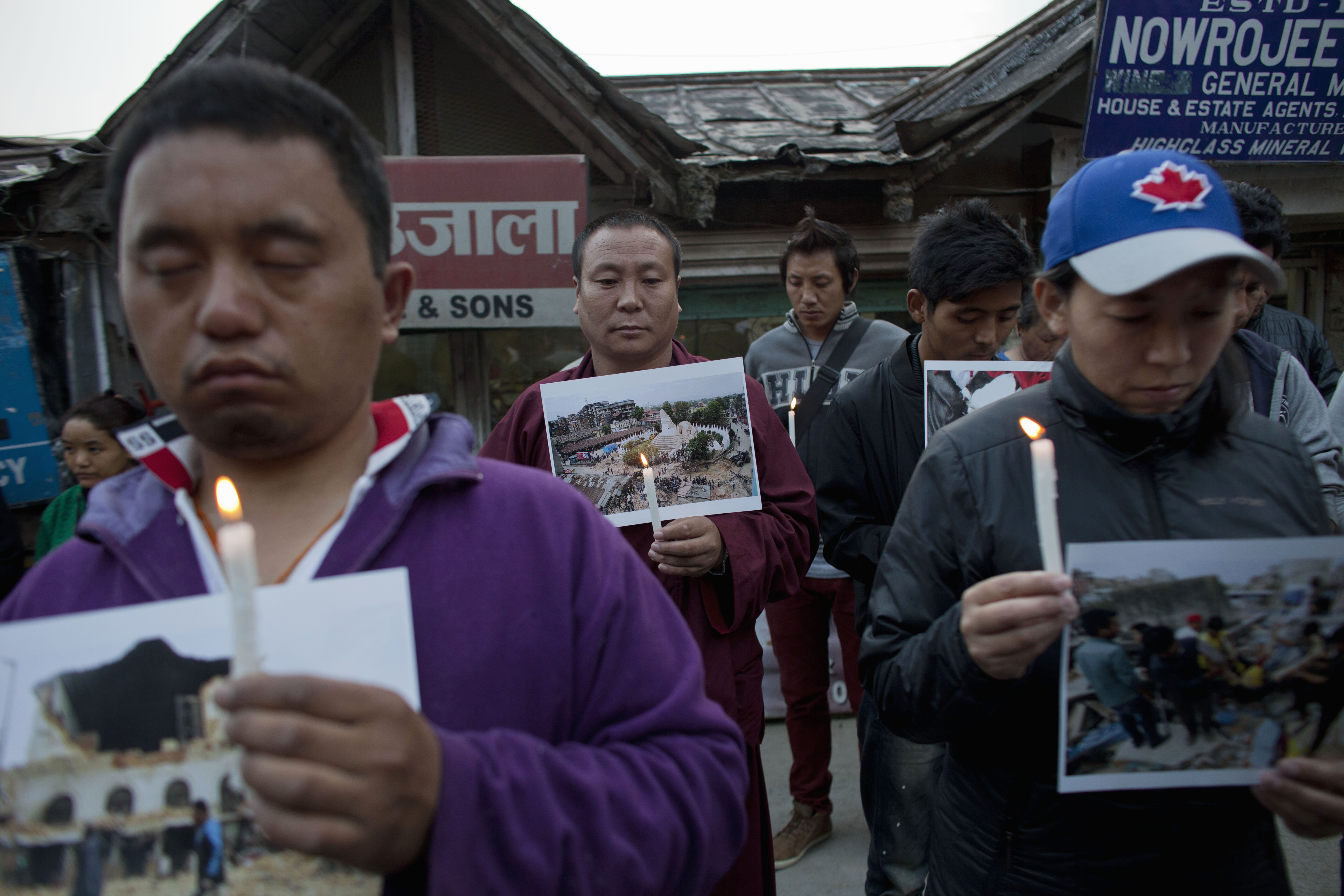 KATHMANDU, Nepal -- The death toll from Nepal's earthquake rose past 4,000 on Monday, two days after the massive trembler ripped across this Himalayan nation, leaving tens of thousands shell-shocked and sleeping in streets.

Aid groups received the first word from remote mountain villages - reports that suggested many communities perched on mountainsides were devastated or struggling to cope.

Landslides hindered rescue teams that tried to use mountain trails to reach those in need, said Prakash Subedi, chief district official in the Gorkha region, where the quake was centered.

"Villages like this are routinely affected by landslides, and it's not uncommon for entire villages of 200, 300, up to 1,000 people to be completely buried by rock falls," said Matt Darvas, a member of the aid group World Vision. "It will likely be helicopter access only."

Saturday's magnitude 7.8 earthquake spread horror from Kathmandu to small villages and to the slopes of Mount Everest, triggering an avalanche that buried part of the base camp packed with foreign climbers preparing to make their summit attempts. At least 18 people died there and 61 were injured.

In Nepal, the Home Ministry said the toll had risen is 2,789, and ministry official Laxmi Dhakal said that besides rescue efforts the government was focusing on distributing relief materials. Another 61 people died from the quake in India and a few in other neighboring countries.

Kathmandu district chief administrator Ek Narayan Aryal said tents and water were being handed out Monday at 10 locations in Kathmandu, but that aftershocks were leaving everyone jittery.

"There have been nearly 100 earthquakes and aftershocks, which is making rescue work difficult. Even the rescuers are scared and running because of them," he said.

Tens of thousands spent the night sleeping in parks or on a golf course. Others camped in open squares lined by cracked buildings and piles of rubble.

"We don't feel safe at all. There have been so many aftershocks. It doesn't stop," said Rajendra Dhungana, 34, who spent the day with his niece's family for her cremation at the Pashuputi Nath Temple in Katmandu. "I've watched hundreds of bodies burn."

The capital city is largely a collection of small, poorly constructed brick apartment buildings. But outside of the oldest neighborhoods, many in Kathmandu were surprised by how few modern structures collapsed in the quake.

Aid workers also warned that the situation could be far worse near the epicenter. The U.S. Geological Survey said the quake was centered near Lamjung, about 80 kilometers (50 miles) northwest of Kathmandu.

The earthquake was the worst to hit the South Asian nation in more than 80 years. It destroyed swaths of the oldest neighborhoods of Kathmandu and was strong enough to be felt all across parts of India, Bangladesh, China's region of Tibet and Pakistan.

Nepal's worst recorded earthquake in 1934 measured 8.0 and all but destroyed the cities of Kathmandu, Bhaktapur and Patan.

Rescuers aided by international teams spent Sunday digging through rubble of buildings - concrete slabs, bricks, iron beams, wood - to look for survivors. Because the air was filled with chalky concrete dust, many people wore breathing masks or held shawls over their faces.

Hundreds of people in Kathmandu's western Kalanki neighborhood nervously watched the slow progress of a single backhoe digging into the rubble of the collapsed Lumbini Guest House, once a three-story budget hotel.

Most areas were without power and water. The United Nations said hospitals in the Kathmandu Valley were overcrowded and running out of emergency supplies and space to store corpses.

Most shops in Kathmandu were closed after the government declared a weeklong period of recovery. Only fruit vendors and pharmacies seemed to be doing business.

"More people are coming now," fruit seller Shyam Jaiswal said. "They cannot cook so they need to buy something they can eat raw."

Jaiswal said stocks were running out, and more shipments were not expected for at least a week, but added, "We are not raising prices. That would be illegal, immoral profit."

The quake will probably put a huge strain on the resources of this impoverished country best known for Everest, the highest mountain in the world. The economy of Nepal, a nation of 27.8 million people, relies heavily on tourism, principally trekking and Himalayan mountain climbing.

The first nations to respond were Nepal's neighbors - India, China and Pakistan, all of which have been jockeying for influence over the landlocked nation. Nepal remains closest to India, with which it shares deep political, cultural and religious ties.