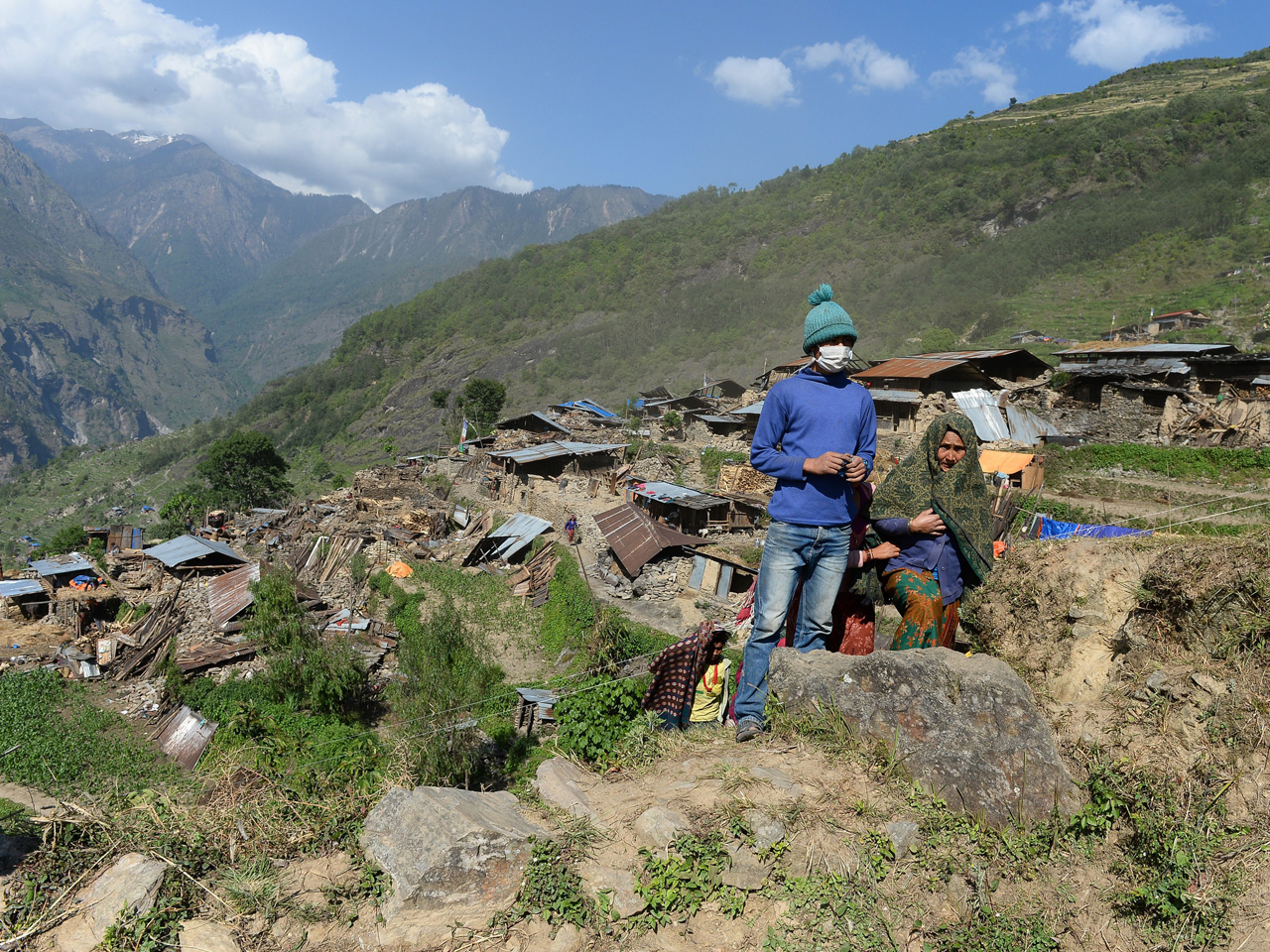 The death toll climbed to 7,250, including six foreigners and 45 Nepalese found over the weekend on a popular trekking route, said government administrator Gautam Rimal. Nepal's Tourist Police reported that a total of 57 foreigners have been killed in the April 25 quake, and 109 are still missing, including 12 Russians and nine Americans.

The main runway was temporarily closed to big planes because of damage. It was built to handle only medium-size jetliners, but not the large military and cargo planes that have been flying in aid supplies, food, medicines, and rescue and humanitarian workers, said Birendra Shrestha, the manager of Tribhuwan International Airport, located on the outskirts of Kathmandu.

There have been reports of cracks on the runway and other problems at the only airport capable of handling jetliners.

"You've got one runway, and you've got limited handling facilities, and you've got the ongoing commercial flights," said Jamie McGoldrick, the U.N. coordinator for Nepal. "You put on top of that massive relief items coming in, the search and rescue teams that has clogged up this airport. And I think once they put better systems in place, I think that will get better."

He said the bottlenecks in aid delivery were slowly disappearing, and the Nepalese government eased customs and other bureaucratic hurdles on humanitarian aid following complaints from the U.N.

"The government has taken note of some of the concerns that we've expressed to them," he said.

Kai Tabacek, a spokesman for the British charity Oxfam, said the main problem was that Kathmandu airport was too small "to deal with huge volume of traffic. Of course, there have been some delays, but these have more to do with the challenge of moving large volumes of goods than customs."

Airport congestion was only the latest complication in the global effort to aid people in the wake of the April 25 quake, the impoverished country's biggest and most destructive in eight decades. Nepal's geography of high mountains and difficult road networks "is always going to be a challenge," McGoldrick said. Airlifting goods by helicopter "right now is quite limited," he said.

People in Nepal - both in remote villages and the capital, Kathmandu - have complained about not seeing any rescue workers or international aid and about a lack of temporary shelters, with many sleeping out in the open because of fears of aftershocks bringing down their damaged homes.

Surendra Acharaya, a villager in Ranipani, told CBS News correspondent Seth Doane the pace of recovery has been so slow and the devastation so great that his future has been "totally cancelled due to the earthquake. My first priority is my family."

U.N. humanitarian officials said that they were increasingly worried about the spread of disease. They said more helicopters were needed to reach isolated mountain villages that were hard to access even before the quake.

The true extent of the damage from the earthquake is still unknown as reports keep filtering in from remote areas, some of which remain entirely cut off. The U.N. says the quake affected 8.1 million people - more than a quarter of Nepal's 28 million people.

The government said Sunday that the quake had killed 7,057 people. Laxi Dhakal, a Home Ministry official, said hopes of finding survivors had faded dramatically. "Unless they were caught in an air pocket, there is not much possibility," he said.

Among the latest fatalities to be counted were the 51 people, including six foreigners, whose remains were found in the Langtang Valley in Rasuwa district, nearly 35 miles north of Kathmandu. Most of the victims were Nepalese guides, hotel owners, workers and porters.

The area, with a dozen inns near the trekking trail, was buried by a landslide after the earthquake.

Nepal has been shaken by more than 70 aftershocks following the quake, and its people remain on edge. One brief aftershock Saturday afternoon shook the only paved road in the village of Pauwathok. Residents screamed and began to run, then stopped when the tremor eased.

The small village is located in the district of Sindupalchok, where more deaths have been recorded than anywhere else in Nepal - 2,560, compared to 1,622 in Kathmandu. The U.N. says up to 90 percent of the houses in Sindupalchok have been destroyed.

Despite the devastation, CBS News correspondent Seth Doane reports there's a sense that - somehow - life has to go on. There are signs of recovery - fruit vendors are back on streets and stores are re-opening. Just over a week after the earthquake struck, the country is limping back to life.

Quake-battered in Nepal tries to lure back tourists

All bodies found from crashed U.S. Marine chopper in Nepal

Six U.S. Marines were on a mission to provide aid in earthquake ravaged Nepal when their aircraft went down
More