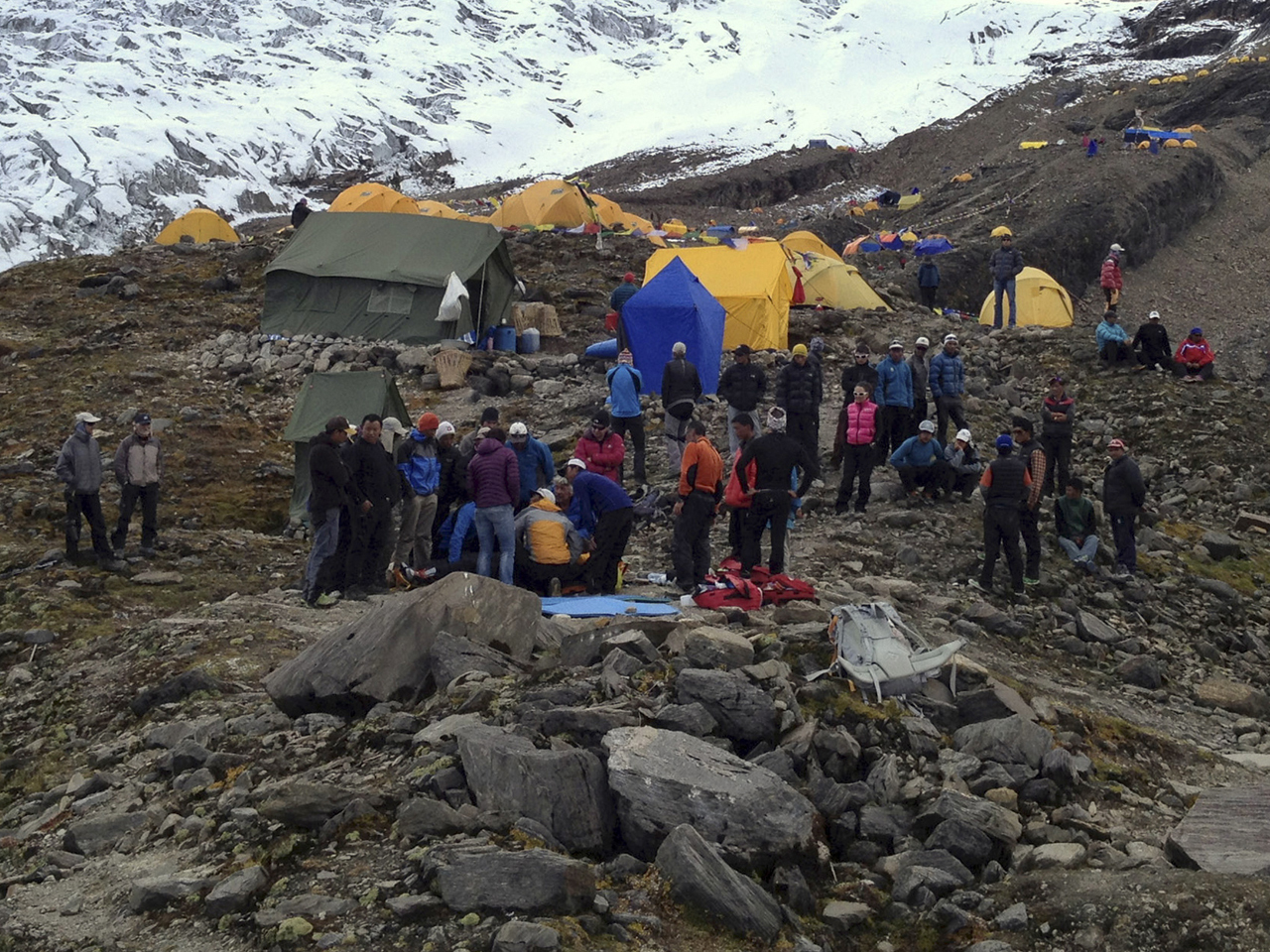 (AP) KATMANDU, Nepal - Mountaineers who survived a pre-dawn avalanche high on the world's eighth-tallest peak say they waited an hour for sunlight, and then saw pieces of tents and bodies of victims strewn around them on the snow.

Veteran Italian climber Silvio Mondinelli said he and a fellow mountaineer were asleep when they heard a violent sound and felt their tent start to slide.

"It was only a few seconds and we did not know what happened, but we had slid more than 200 meters (650 feet)," Mondinelli told The Associated Press on Monday. "All we wanted was for it to stop."

The avalanche hit at about 4 a.m. Sunday while more than two dozen climbers were sleeping in their tents at Camp 3 on Mount Manaslu in northern Nepal.

At least nine climbers were killed and six are believed still missing.

Helicopters flew over the slopes on Monday to search for the missing mountaineers as climbers and guides searched the slopes on foot. Rescuers brought down eight bodies — four French, one German, one Italian, one Spaniard and one Nepali guide — and were trying to retrieve the ninth from the 22,960-foot area where the avalanche struck, police Chief Basanta Bahadur Kuwar said.

Ten climbers survived, but many of them were injured and were flown to hospitals by rescue helicopters.

Three French climbers and two Germans were transported to hospitals in Katmandu on Sunday. Two Italians were flown there on Monday — Mondinelli, who has climbed the world's 14 highest peaks, and fellow mountaineer Christian Gobbi.

Mondinelli said another Italian climber and their Sherpa guide were sleeping in another tent and were buried by the avalanche and died.

Gobbi said they could not see at first when they looked out of their torn tent because it was pitch dark and they had no light.

"We found someone's boots and put them on," he said.

When the sun rose an hour later, they saw parts of tents scattered across the snow, along with people who had been killed or injured.

They said they were able to assist the injured with the help of Sherpa guides who came from lower camps. Those who could walk made their way down to the base camp while those who were injured were picked up by helicopters.

Italian, German and French teams were on the mountain, with a total of 231 climbers and guides, but not all were at the higher camps hit by the avalanche.

Mount Manaslu is 26,760 feet high and has attracted more climbers recently because it is considered one of the easier peaks to climb among the world's tallest mountains.

Nepal has eight of the 14 highest peaks in the world. Climbers have complained in recent years that conditions on the mountains have deteriorated and risks of accidents have increased, with some laying the blame on global warming.

Avalanches are not very frequent on Mount Manaslu, but in 1972 one struck a team of climbers and killed six Koreans and 10 Nepalese guides.

Ang Tshering of the Asian Trekking agency in Katmandu, who has equipped hundreds of expeditions, said low snow levels and the increased number of climbers on Manaslu have made climbing conditions difficult.

"It used to be a low-risk mountain in the past, but now that has all changed," Tshering said, adding that conditions have become more unpredictable.