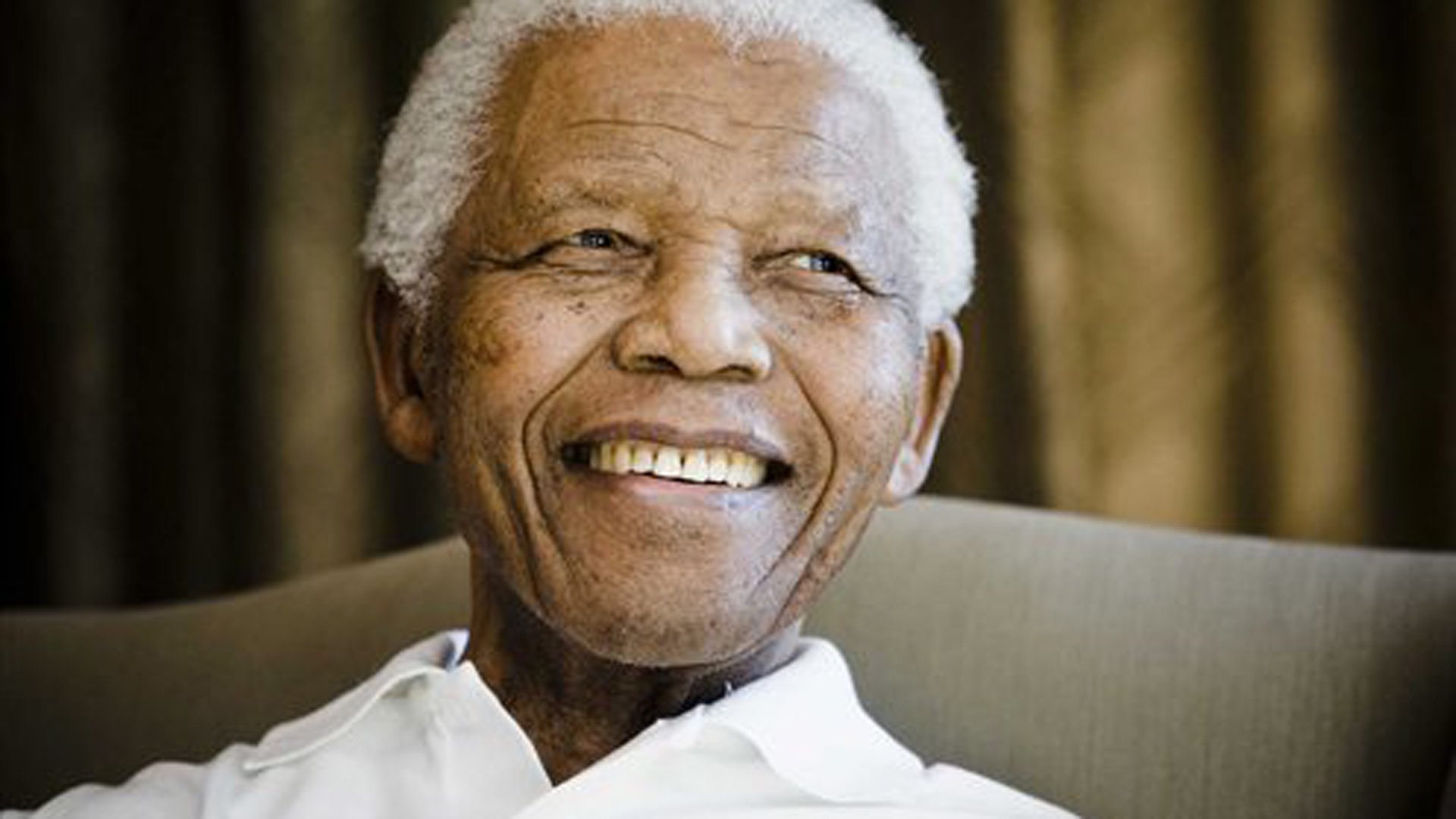 The following is a script from "Mandela" which aired on Dec. 8, 2013. Bob Simon is the correspondent. Michael Gavshon, producer.

The last time we did a story on Nelson Mandela we described him as the most admired human being alive. We can't say that any more today. The great man died on Thursday.  He was 95 years old. The most remarkable thing about Mandela  was not just that he liberated a nation from racial oppression, but that he forgave the men who stole his life from him…who kept him in jail for 27 years. That's why he is viewed by so many as nothing less than a saint, a view which he always found dreadfully embarrassing. We thought it would be appropriate today to glance at the life, not of Mandela the man of history -- that's pretty well known -- but at Nelson, the human being, father, husband, cellmate, friend.

For the last few years, he’d hardly ever been seen in public. He left home only for very special occasions, like a visit to the school of his great grand-daughter Zenani.

Nelson Mandela:  And where do you come from?

Schoolgirl:  Um, I come from London.

Nelson Mandela:  From London?  Oh!  Have you met with the queen there?

That’s the Mandela who spent 27 years without seeing a single child.  It’s the Mandela revealed in a book published in 2010:  "Conversations with Myself," a collection of his letters, prison diaries, scribblings, it was compiled with his permission by Verne Harris, chief archivist at the Mandela Foundation.

Verne Harris: He's said, "I don't want you to ask me, ‘Is this too personal, is this too--potentially embarrassing.’"

Bob Simon:  He wants to see the Mandela as they say, warts and all?

Verne Harris: He said, "You don't have to protect me."

Mandela kept records of everything…in desk calendars, memo pads, every scrap of paper he could lay his hands on.

Bob Simon:  Hmm!  That writing is incredible, it's tiny!

The most revealing are two notebooks with drafts of letters he wrote from Robben Island, the apartheid regime’s Alcatraz, where he was serving a life sentence for sabotage.  This is the only footage we have of Mandela, the prisoner.  He was allowed to send and receive one letter every six months.  And the letters reveal that his passion for his wife Winnie never waned.

“What a masterpiece,” he wrote after she sent him a picture of herself. “The picture has aroused all the tender feelings in me and softened the grimness that is all around.  It has sharpened my longing for you and our sweet and peaceful home.”

Winnie had become Mandela’s voice on the outside and the apartheid regime came down on her with a vengeance.  She was repeatedly thrown into jail and tortured.  The struggle was now not only devastating their lives. Their two young daughters had been effectively abandoned. Mandela was incredibly blunt about what awaited them.

“The picture has aroused all the tender feelings in me and softened the grimness that is all around.  It has sharpened my longing for you and our sweet and peaceful home.”

"My Darlings” he wrote. "Once again, our beloved Mommy has been arrested and now she and Daddy are away in jail… you may live like orphans…without your own home and parents… you will get no birthday or Christmas parties, no presents or new dresses, no shoes or toys."

Bob Simon:  What does it feel like reading it today?

Zindzi Mandela: It takes me back to very difficult times.  And, again-- it's-- it's still not easy to talk about those times.

Mandela’s youngest daughter Zindzi was a toddler when he was taken away.  She didn’t see him again until she was 15 and traveled to visit him on the island. They were separated by a glass partition, guards listened to every word.

Zindzi Mandela:  He was so protective and so charming and he tried to make me imagine sitting at home on his lap in front of the fireplace and him reading me a story.

Bob Simon: Did you cry?

Zindzi Mandela: Yes, I did.

Zindzi Mandela: No, he didn't. I’ve very rarely seen my father like even close to tears.

But Mandela wrote with tears of what he went through when his mother died.  And when his eldest son Thembi was killed in a car crash…

"The news was broken to me at two thirty p.m.,” he wrote. “Suddenly my heart had seemed to stop beating, and the warm blood that had freely flowed in my veins for the last 51 years froze into ice.”

Mandela asked for permission to leave the island and attend their funerals.  The authorities said no. Mac Maharaj, a fellow prisoner, says Mandela didn’t even wince.

Mac Maharaj: He had to hold his emotions tightly to himself. He could not divulge to the authorities and let them feel that this was a weakness in his armor.

“Suddenly my heart had seemed to stop beating, and the warm blood that had freely flowed in my veins for the last 51 years froze into ice.”

Reveal nothing.  That was Mandela’s strategy and organize the prisoners into a government in waiting. He never doubted that the racist regime would be overthrown.  So even back then, he started preparing.  First move: learn the language of the oppressor, Afrikaans.

Bob Simon: The language of the enemy?

The book contains defiant letters Mandela wrote to the authorities reminding them that, as political prisoners, they had rights and should be treated with dignity.  In response, he got a visit from a general who was intent on putting Mandela in his place.

Mac Maharaj: And he says to Mandela, "Mandela? You better remember you are a prisoner. And in a very polite way he says to him, "General, you and I may be generals on the opposite side of this war. At some point even if it is to accept the surrender from the other we'll have to meet. And how we treat each other now will determine how we interact at that moment."

The regime was then forced to change its strategy. It tried to undermine Mandela in the most insidious way.  He was moved to a private house in a prison on the mainland, equipped with a chef and a swimming pool. Officials came to see him, brought along a case of wine, and tempted him to sell out.

Verne Harris: This was the key moment for me in Nelson Mandela's life. This was when he was most at risk, because he starts negotiating from prison on his own. He's incredibly vulnerable.

Bob Simon:  What could have happened to him?

So when he walked out of prison, he knew. . . the world knew. . that he was walking to the presidency… taking over the country that had been run by white racists for more than 40 years.

Bob Simon:  How do you explain that incredible confidence?

Verne Harris: I think from very early on he had a very strong sense of destiny.

But the country was on the brink of a civil war. He ruled with the exact same strategy he had employed as a prisoner.  Don’t go for revenge.  Go for reconciliation.

He showed up at the finals of rugby’s World Cup.  This was the white sport in South Africa. And here was a black president wearing the team jersey, waving the team cap.  Spectators, the team, were stunned.

[Announcer:  And Nelson Mandela is cheering along with the whole of the stadium…]

He brought Afrikaners into his government, including Zelda La Grange. This is Zelda back then.  Zelda was a typist in the presidential office building when Mandela took over. One day she literally bumped into him in a corridor.

Zelda La Grange: And he stopped me and he started speaking in Afrikaans with me.

Zelda La Grange: That's right. And I didn't understand a word he was saying because I was so shocked. There was a feeling of guilt immediately overtaking my emotions that I felt responsible for taking away so many years of his life.

Bob Simon: You broke down?

Mandela hired Zelda, brought her into his office.

He wanted his old oppressors to know they’d be OK in the new South Africa.  Zelda La Grange had a role to play.

Bob Simon:  So it was a political decision, you think.

Zelda La Grange: Yes, definitely. There was some political thinking behind it for sure, some strategy, absolutely.

It wasn’t long before Zelda became his most trusted assistant.  For the last 19 years, every pop star, politician, president or pope who wanted to see the great man knew enough to cozy up to Zelda La Grange. We asked her about their relationship when we interviewed her back in 2010.

Bob Simon: And you became his granddaughter didn’t you?

Bob Simon:  Love is the word?

It wasn’t just Zelda. Mandela was winning the love and admiration of, well, just about everyone.  But he couldn’t hold on to the woman he had adored for 40 years, his wife Winnie. They were divorced in 1996. And his daughter Zindzi?

Bob Simon: Whenever he had to choose, your father chose the struggle over his family. Did that make you angry?

Zindzi Mandela: Oh, yes, it did. Of course it did. I would get hurt. I would get angry, especially when I was younger. I mean I grew up-- wanting my father to come back home, wanting to be an ordinary family.  I don't know what that was like to have a father, you know, to tuck me in at night.

On his 80th birthday, Mandela married Graca Machel, and finally found happiness. They had a lot in common.  She had also been a political activist, a freedom fighter.  When we interviewed Graca in 2010, we asked her what her husband was like before he got ill.

Bob Simon: Does he ever get angry?

Graca Machel: Very. Oh, don't want to be next to him when he is angry.

And it’s not just anger.  Graca, who called her husband Madiba, says he was stubborn, too trusting, and excessively loyal to people who did not deserve it.

Graca Machel: I am one of those who says he is not a saint.  Madiba is a normal human being.

Bob Simon: A normal human being.

Bob Simon: Excuse me. He spent 27 years in jail. And when he got out, he forgave the people who put him in jail and who stole his life from him. This is not normal.

He kept wearing that stone face for the rest of his life, even when his eldest son died of AIDS in 2005.  And five years later, when his favorite great grand-daughter Zenani, who you saw at the beginning of this story, was killed in a car crash.

This happened on the eve of the World Cup in South Africa in 2010 and Mandela had been expected to attend. No one knew if he would make it, he was so sad, so frail.  But then, there he was. Once again, for the last time, Nelson Mandela lit up the world with his smile.

Who did Mandela leave his $4.1M estate to?
More
Bob Simon