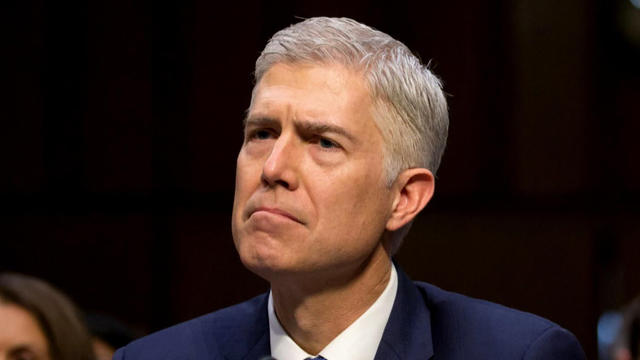 The Senate Judiciary Committee voted on a party-line vote Monday 11-9 for Neil Gorsuch to serve as an associate justice on the Supreme Court.

Several hours into the hearing Monday, it became clear that Democrats have enough support for a filibuster on Gorsuch’s nomination.

The Senate will begin the full confirmation vote on the floor on Friday, and Senate Majority Leader Mitch McConnell, R-Kentucky, has warned that Republicans would pursue the nuclear option and eliminate the filibuster for Supreme Court nominations if Democrats are united against Gorsuch.

Three Senate Democrats had announced that they support Gorsuch’s nomination -- Sens. Joe Manchin of West Virginia, Heidi Heitkamp of North Dakota and Joe Donnelly of Indiana. Sen. Michael Bennet, D-Colorado, announced Monday that he would vote to advance his nomination and not join the Democratic filibuster.

These are the Senate Democrats still undecided on cloture and final confirmation:

2:32 p.m. The committee has advanced Gorsuch’s nomination to the floor in a party-line vote 11-9.

2:30 p.m. Sen. John Kennedy (R-Louisiana) said Democrats “have the right to filibuster,” though he noted that it “will be a first” for Supreme Court nominees.

“He deserves to be on the bench,” he said. “I regret that it may have to be done under the circumstances that we’re doing.”

2:10 p.m. Sen. Mazie Hirono (D-Hawaii) argued that the Senators have a “clear understanding that here is a great deal of difference between how a Justice Gorsuch ... and say, what a Justice Merrick Garland would do.”

“Does judicial philosophy matter? Of course it does,” she said

She criticized Senate Majority Leader Mitch McConnell for his desire to “jam this nomination through more quickly than for any recent Supreme Court nominee.”

2:01 p.m. There is no credible argument that Judge Gorsuch is anything but “indisputably qualified” to serve as a justice on the court, Texas Sen. Ted Cruz argued. He listed and quoted the left and left-leaning legal minds who have spoken out in support for Gorsuch, including Obama’s former acting solicitor general and his ethics czar, among others.

A decade ago, “not a single Democrat spoke out” against Gorsuch’s nomination for the federal appeals court a decade ago, Cruz said. He blamed corporate money in politics for the Democratic filibuster. Outside groups, he said, a handful of left-wing billionaires are holding Democratic senators hostage, Cruz asserted, saying that they were being threatened by primary challenges if they do anything but vote against Mr. Trump.

1:36 p.m. Sen Richard Blumenthal, D-Conn., said he’s still angry about the treatment of Judge Merrick Garland. However, he said his vote is not about Garland. It’s about Gorsuch, “who has evaded real answers at every turn” about precedent-setting cases. Blumenthal said he doubts that Gorsuch is a neutral umpire of the law, and is, rather, an “acolyte of hard-right special interests.”

Democrats have enough votes for filibuster of Gorsuch - 1:10 p.m. Sen. Chris Coons, D-Delaware, one of the Senate Democrats undecided on cloture and Gorsuch’s final confirmation, announced he can’t support Gorsuch’s nomination in committee today. He said he has not forgotten the “injustice” done to Garland last year. He said he came to his decision after keeping an open mind, reviewing his record, meeting Gorsuch twice and after four days of confirmation hearings.

Coons says he will oppose cloture, ensuring Democrats have enough support for a filibuster.

“I disagree with those who somehow say this is the end of the Senate as we know it. This is a restoration of the status quo ante, before our Democratic colleagues erected this artificial 60-vote requirement,” he said. “I am proud to say that this good man, and this good judge, who has offered himself to serve our country on the United States Supreme Court, will be confirmed by the end of this week. And he should be.”

12:24 p.m. Sen. Mike Lee, R-Utah says he’s in favor of Gorsuch’s nomination. Sen. Amy Klobuchar, D-Minnesota, says she has decided to oppose Gorsuch’s nomination because of his record in cases regarding children with disabilities, campaign finance and preserving health and safety protections.

She slammed Republicans for what they said about changing Senate rules because of the way they ignored the nomination of Garland last year. She said she finds it difficult to hear the other side “spout righteous indignation about Senate rules.”

12:10 p.m. Earlier in the hearing, Sen. Patrick Leahy, D-Vermont, the former ranking member, announced he would vote against cloture and on a final confirmation vote.

“For over 42 years I have devoted myself to the good that it can accomplish. But I cannot vote solely to protect an institution when the rights of hardworking Americans are at risk. I fear the Senate I would be defending no longer exists. I have often said that the Senate, at its best, can be the conscience of the Nation,” Leahy said. “I must now vote my conscience, both today and later this week. My conscience will not allow me to ratify the Majority Leader’s actions – not last year and not this year. I will not support advancing this nomination.”

12:04 p.m. Sen. Sheldon Whitehouse, D-Rhode Island, said that there’s too much evidence that makes him unable to “trust” Gorsuch as the Supreme Court nominee.

11:08 a.m. Sen. Lindsey Graham, R-South Carolina, just said, “I will vote for him with a very clear conscience.” Graham said it’s “laughable” to think that Democrats wouldn’t have done what Republicans did to Judge Merrick Garland last year if the roles were reversed. Senate Republicans decided not to consider President Obama’s nomination of Garland to the Supreme Court last year because they wanted the 2016 election to determine the high court’s fate.

“This will be the last person who will be subject to a filibuster,” he said.

11:06 a.m. Sen. Mark Warner, D-Virginia, who was one of the undecided’s, just announced he would vote against Gorsuch on cloture and on the final confirmation vote.

10:43 a.m. Sen. Dianne Feinstein, D-California, ranking member on the panel, announced, “I cannot support this nomination.” Her spokesman confirmed to CBS News that Feinstein also plans to join the Democratic filibuster and oppose the cloture vote on Friday.

10:25 a.m. ET Sen. Chuck Grassley, R-Iowa, chairman of the committee, urged his colleagues to support Gorsuch in his opening statement.

“Judge Gorsuch is eminently qualified,” he said. “He’s a mainstream judge who’s earned the universal respect of his colleagues on the bench and in the bar. He applies the law as we in Congress write it—as the judicial oath says, without respect to persons. And he refuses to compromise his independence. This nominee we’re voting on today is a judge’s judge. He’s a picture of the kind of Justice we should have on the Supreme Court. So I urge you to join me in supporting his nomination.”