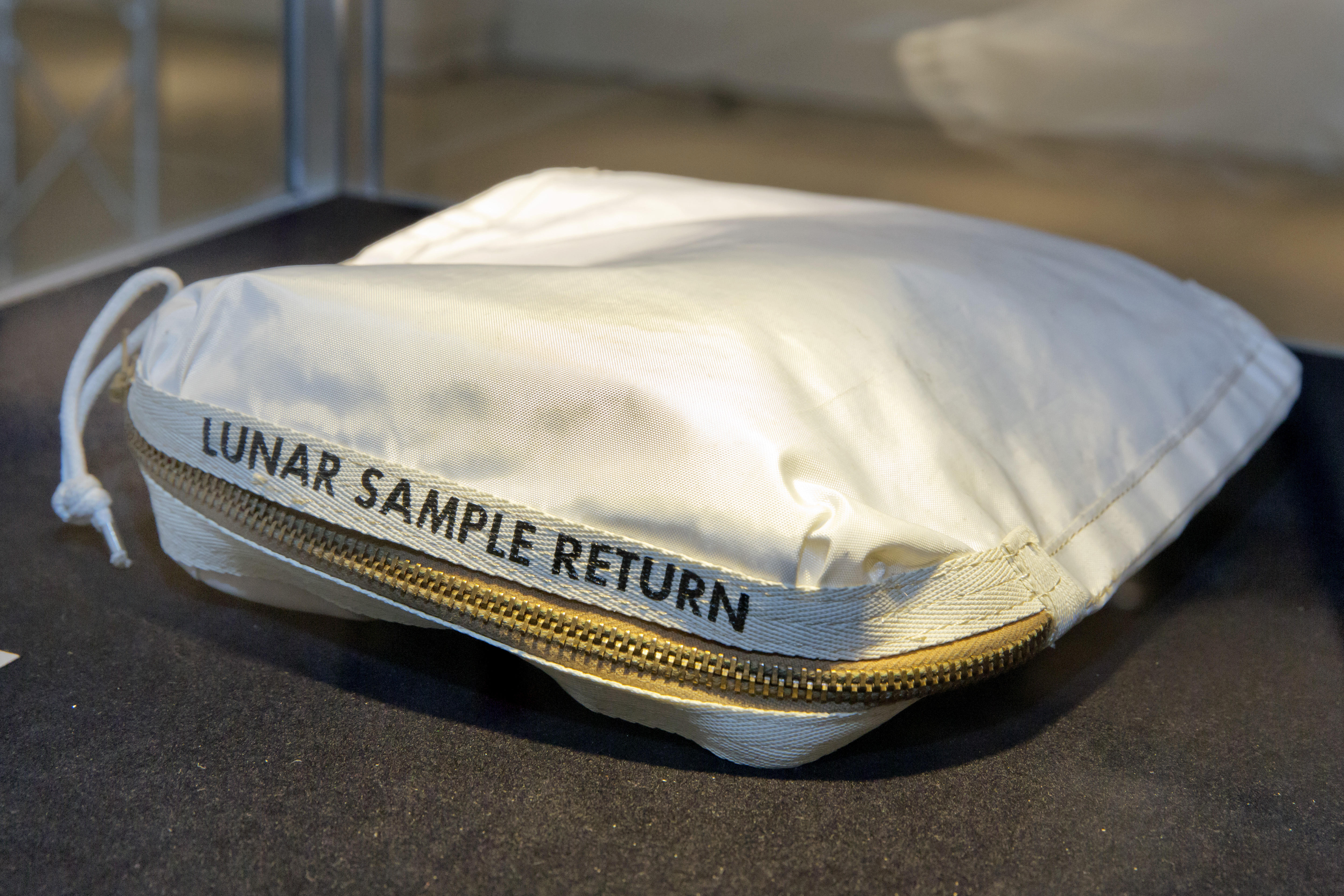 The sale at Sotheby's on Thursday was surrounded by some fallout from a galactic court battle.

The collection bag was used by astronaut Neil Armstrong during the first manned mission to the moon in 1969, and the auction marks the 48th anniversary of that event.

The moon dust is the first sample of Earth's satellite ever collected.

The artifact from the Apollo 11 mission was forgotten about until resurfacing three years ago on a government auction website that space enthusiast Nancy Carlson liked to check out, CBS News' Jim Axelrod reports.

"I did see a bag that was described as a lunar bag," Carlson said. "Flown. With a number on it. And it included the word moon dust."

She quickly slapped down her $995, and a week later a brown box arrived. Inside the box: history.

NASA fought to get it back, and in December, a federal judge ruled that it legally belonged to Carlson.

But Carlson believed the bag wouldn't be safe in her home, so she auctioned it off.

"I found a piece of history that everybody forgot about," Carlson said. "So that's my great gratification in all this. I saved it from being lost."

Thursday's bidding for the bag went slowly, CBS News has learned, and went up in very small increments.

Although Sotheby's declined to identify the buyer who won the bag, Lo118 was the buyer on the phone.

Cassandra Hatton, who handled the sale for Sotheby's, said it is "absolutely" a one-of-kind item.

"I just say Neil Armstrong moon dust -- you get it," Hatton says. "You don't have to be American to understand why this is so important and this is also what's exciting about this. I could talk to a 5-year-old in China, and they would get excited about this."

Other items on the block were Armstrong's snapshot of fellow Apollo 11 astronaut "Buzz" Aldrin on the moon. Sotheby's tweeted Thursday that the image soared past $35,000 at auction -- which was seven times above the original estimate.

Sotheby's tweeted a photo of another item -- a flight plan autographed by crew members of the ill-fated Apollo 13 mission. Sotheby's said Thursday that it went for $275,000, six times a high estimate.

Another item that sold at auction was a picture of astronaut Charlie Duke on the lunar surface during the Apollo 16 mission. It went for $37,500, Sotheby's tweeted.

Also up for bid Thursday was a picture of man's first look at Earth from the moon. Sotheby's said on Twitter that it fetched $17,500 -- nearly three times its high estimate.

Capping the sale was a Snoopy astronaut doll that was the mascot of the Apollo 10 crew, at an estimated pre-sale price of $2,000 to $3,000. Late Thursday, the auction price soared to $27,500, according to Sotheby's.

In all, Thursday's auction of various items garnered a total of $3.8 million, according to a Sotheby's tweet.