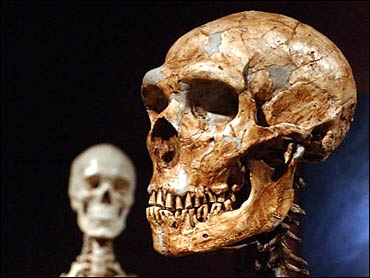 A study of the skulls of Neanderthals, comparing them to early and modern humans, concludes that that ancient group is unlikely to have been the ancestor of people today.

Scientists have long debated whether modern people are related to Neanderthals, the squat, powerful hunters who dominated Europe for 100,000 years before dying out on the arrival of modern humans.

The new study, led by anthropologist Katerina Harvati of New York University, measured 15 standard landmarks on the face and skull of Neanderthals, early modern humans, current humans as well as other primate species.

While Harvati says the analysis "cannot completely rule out" a relationship between humans and Neanderthals, it strongly suggests they are separate species.

Her report comes just four months after anthropologist Erik Trinkaus of Washington University in St. Louis reported the discovery of a jawbone in a cave in Romania that may be evidence of the earliest modern humans in Europe.

The jawbone, dated at 34,000 to 36,000 years ago when humans overlapped with Neanderthals, has characteristics similar to other early modern humans, but also certain features that indicate a possible Neanderthal connection, the researchers said. That suggests the possibility of interbreeding with Neanderthals.

Last March, Richard G. Klein of Stanford University, reported that while studies of DNA indicate that Neanderthals and humans had a common ancestor, there is no evidence that the two ever mixed in substantial numbers, which means that when the Neanderthals died out, so did their genes.

But a study published in 2002 suggested that the genes of people today carry vestiges of genes of Neanderthals and other extinct branches of the human family.

That report by population biologist Alan R. Templeton of Washington University in St. Louis suggests there were at least two distinct human migrations out of Africa, the first between 420,000 and 840,000 years ago and the second between 80,000 and 150,000 years ago.

According to Templeton, the most recent migration, and perhaps both, were not "replacement events." Rather, he said DNA evidence shows evidence of interbreeding.

Divers take lionfish invasion into their own hands
Thanks for reading CBS NEWS.
Create your free account or log in
for more features.
View CBS News In
CBS News App Open
Chrome Safari Continue
Be the first to know
Get browser notifications for breaking news, live events, and exclusive reporting.