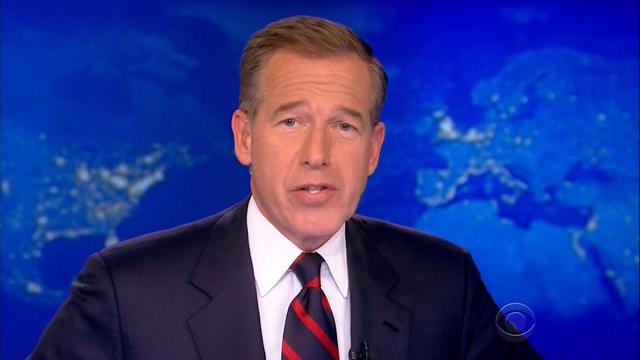 NEW YORK -- NBC said Thursday that Brian Williams will not return to his job as "Nightly News" anchor following his suspension for misrepresenting himself, but will be given a second chance with the company as a breaking news anchor at the cable network MSNBC.

Williams said he was sorry for saying things that weren't true, apologized to colleagues and viewers, and said that "I'm determined to earn back their trust."

Lester Holt, who has been subbing for Williams since his suspension in February, will officially take over as anchor at "Nightly News," the network said.

Williams was suspended in February for falsely claiming he had been in a helicopter hit by enemy fire during the Iraq War. NBC launched an internal investigation that found Williams "made a number of inaccurate statements about his own role and experiences covering events in the field." Most of them were not on NBC News, but on talk shows or in public appearances.

He'll begin an attempt to rehabilitate his reputation on Friday in an interview that he has already recorded with colleague Matt Lauer, to be shown on the "Today" show and "Nightly News."

NBC, which had signed Williams to a new five-year contract last fall, had been negotiating his new role over the past few weeks. Network executives didn't immediately make themselves available to explain what led them to believe he could not continue on "Nightly News," where he had reigned as television's most popular news anchor since 2004.

"As you would imagine this was a difficult decision," said Steve Burke, CEO of NBC Universal, in a statement. "Brian Williams has been with NBC News for a very long time and he has covered countless news events with honor and skill. As I said in February, we believe in second chances, and I am hopeful that this new beginning will be good for Brian and the organization."

Besides the work at MSNBC, Williams will serve report on breaking news at NBC when Holt is not available, beginning that role in August.

Besides the retelling of Williams' experiences in Iraq in 2003 that led to his suspension, there were reports that questioned Williams' claims during coverage of Hurricane Katrina, anti-government riots in Egypt, conflicts between Israel and Palestinians and the aftermath of the mission to kill Osama bin Laden.

There is no indication that NBC plans to release results of its investigation into Williams, conducted by its general counsel, Kim Harris, and head of its investigative unit, Richard Esposito. Burke said that "this matter has been extensively analyzed and deliberated on by NBC. We are moving forward."

Jay Rosen, a journalism professor at New York University and author of the Press Think blog, said that while he agreed that Williams deserved a chance to work his way back, letting the public know what NBC had found in its investigation is an important step in regaining credibility. NBC's announcement on Thursday said Williams' misstatements "did not for the most part occur" on NBC News platforms, but did not indicate which ones did.

"How does the public know what you're coming back from?" Rosen asked.

Also unclear is why Williams was judged too damaged to report news on "Nightly News" but able to do so on MSNBC. "What is the logic of that?" Rosen asked.

Kelly McBride, an ethics expert at the journalism think tank the Poynter Institute, said Williams needs to do some hard work at MSNBC and not mess up for a couple of years.

"This is like a major league hitter going down to the minor leagues," McBride said. "Good for him. He probably doesn't need the money."

Robert Barnett, who has been negotiating the return as Williams' representative for the past several weeks, said the newsman would have no further comment beyond his statement on Thursday.

Mark Feldstein, chairman of the broadcast journalism department at the University of Maryland, said it was a "shameless" ratings ploy to have Williams be interviewed about his misdeeds on NBC newscasts. It's also natural to wonder if a fellow NBC employee might pull punches in an interview in a way that a journalist outside of the company would not.

The continued questions about Williams obscured Holt's achievement. Holt, 56, is a veteran newsman who has been at NBC since 2000 and worked in local news in New York, Los Angeles and Chicago. He will be the first African-American to solely anchor a network evening newscast; Max Robinson was part of a three-person team at ABC News in the late 1970s and early 1980s.

"He's an exceptional anchor who goes straight to the heart of every story and is always able to find its most direct connection to the everyday lives of our audience," said Andrew Lack, chairman of NBC News and MSNBC. "In many ways, television news stands at a crossroads, and Lester is the perfect person to meet the moment."

It has been a rough few months for television personalities, with questions raised about the reporting of Fox News Channel's Bill O'Reilly when he worked at CBS, and ABC News anchor George Stephanopoulos' admission that he donated $75,000 to the foundation run by former President Bill Clinton.

Arguably the biggest story since Holt began subbing for Williams - Wednesday night's shootings at a church in Charleston, South Carolina, happened while Holt was taking some vacation time. Savannah Guthrie traveled to Charleston to anchor the "Nightly News" from there on Thursday.

"The respect and admiration I have for the 'Nightly News' team has only grown deeper over the last several months that we've been together," Holt said. "Day in and day out, under an uncomfortable spotlight, they have produced world-class journalism."