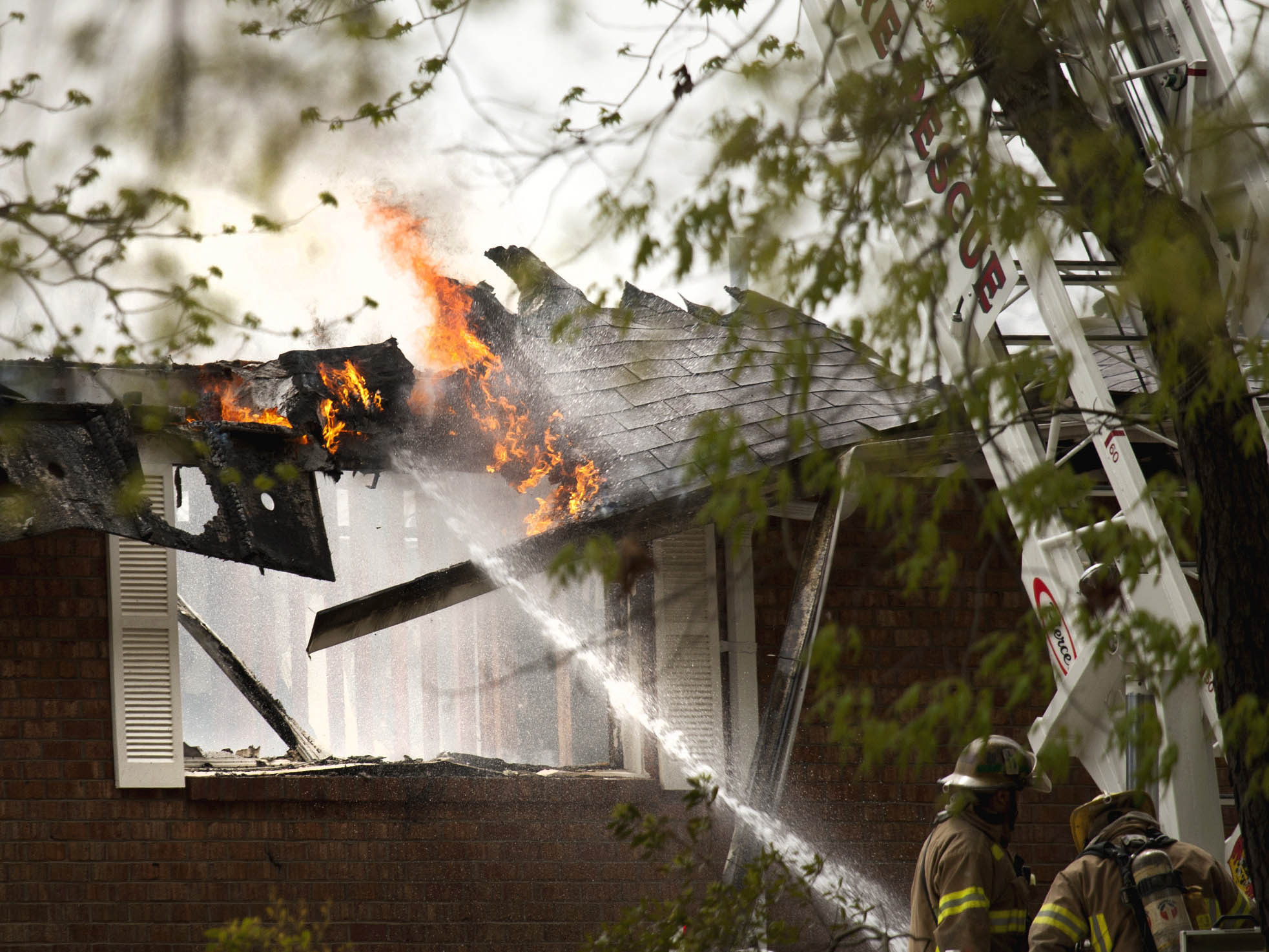 (AP) VIRGINIA BEACH, Va. - A 12-ton Navy jet loaded with tons of fuel crashes in a spectacular fireball into a big apartment complex, scattering plane parts and wiping out some 40 units. How is it that everyone survived?

The mayor of Virginia Beach could only call it a "Good Friday miracle" and pilots marveled at how a failed training flight that engulfed buildings in flames managed to crash without killing anyone. The student pilot, his instructor and five on the ground were hurt, but all were out of the hospital by Saturday.

Investigators, witnesses and experts said multiple factors were at play:

-- Most of the F/A-18D jet's fuel was dumped before the crash, causing less of an explosion.

-- The Navy credited neighbors and citizens with pulling pilots away from the flames after they safely ejected.

-- The plane crashed into the apartment complex's empty courtyard, and two days before Easter in the middle of the day, most residents weren't home.

"At the end of the day," said Daniel O. Rose, a former Navy jet pilot, "I think it was a lot of fortuity. You look at this as a one-off and you still got to scratch your head."

Virginia Beach Mayor Will Sessoms took to Twitter on Saturday to celebrate the fact no lives were lost, calling it a "Good Friday miracle." Adm. John C. Harvey, commander of U.S. Fleet Forces, said he was "quite surprised, to be honest", that no one had died, calling it an "amazing miracle."

The F/A-18D Hornet suffered some sort of massive mechanical problem while soaring above Virginia Beach on Friday, sending it plunging into the Mayfair Mews apartment complex and taking out dozens of units. All residents had been accounted for early Saturday after careful apartment checks, fire department Capt. Tim Riley said.

Investigators will work from the outside of the site toward the center to gather parts from the jet and examine them, as well as check out the flight data recorders, which had not yet been recovered, Harvey said. The investigation could take weeks, he said.

Wearing protective white suits and yellow boots, investigators walked through the site Saturday, where blackened facades and partially demolished brick walls jutted out from the debris.

The airmen were from Naval Air Station Oceana, less than 10 miles away. They were able to safely escape the aircraft, which weighs up to 50,000 pounds fully fueled and armed, before it careened into the apartment complex, demolishing sections of some buildings and engulfing others in flames.

Jeff Swoope, who spent the night in a hotel with about two dozen other homeless residents, had just pulled out of his parking space to run errands when he noticed the low-flying jet heading right at his building.

"I thought I'd better get out of there quick," he said. "It could have hit a gas line, there could have been a bigger explosion."

The aviators on board the F/A-18 Hornet had careful training -- even the student would have had 1 » years of intensive training before taking flight with his instructor on Friday, said J.F. Joseph, a former airline pilot, retired Marine colonel and decorated Navy pilot who flew with the daredevil Blue Angels.

They likely did everything they could to mitigate damage on the ground; one pilot apparently waited until the last second to eject because he was found still strapped to his seat, Joseph said. But maneuvering would have been extremely difficult.

The jet likely was carrying thousands of pounds of fuel on board, which authorities said apparently had been dumped before impact. Fuel was found on cars and homes in the area, though it wasn't clear if that was an intentional move by the pilots or the result of mechanical problems like a ruptured fuel line. The fuel ignites and burns very quickly and could have sparked an even more massive fireball had it not been dumped.

Once emergency officials learned of the crash, they already had practice for what to do next. The military and city cooperate closely to prepare for hypothetical disasters, including simulated crashes, said Virginia Beach spokesman Marc Davis.

The Navy also maps out areas where crashes could occur to make sure residential growth is limited there; the Mayfair Mews complex was in an area where future growth is limited. City and state officials also have spent millions in recent years to buy land where military planes would be most likely to crash.

Rose, the former pilot who is now an aviation attorney, said the fact no one was killed on the ground was "about as close as you can get to a miracle." He called a military crash like this one extremely rare -- a fighter jet crash in 2008 after a training exercise in a San Diego neighborhood killed four family members -- but said a confluence of fortuitous circumstances were behind it.

Local officials were reluctant to express relief, after dozens of people lost their homes.

While many people weren't home in the destroyed apartments, others nearby were going about their day and could only wonder how they avoided such a close call. The plane somehow missed them, in one case by no more than the length of a football field.

Fourteen-year-old Taylor Saladyga was relaxing at home by herself, enjoying spring break, when she heard a blast. The girl lives only about 100 yards from the apartment complex. Her aunt had been driving home at the time and called Saladyga to look up at the billowing smoke.

"I was terrified," Saladyga said. "I thought it was terrorists at first."

Travis Kesler, a special education teacher at a city middle school near the crash, said he thought he was watching a disaster movie when he saw the plumes of black smoke and flames in the air. "Flames coming out of the backside of the building, the roof on fire. It was just insane," he said.

A day later, he said the disaster could have been far worse.

"There are so many apartment complexes through here, there are so many people that live there. people are walking up and down the street all the time, riding bikes," he said. "It's crazy that nobody passed away."