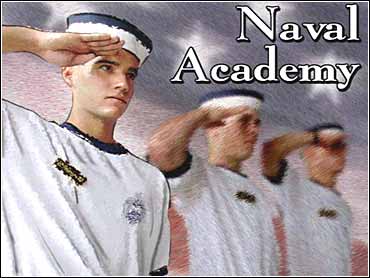 Vice Adm. Richard J. Naughton resigned as superintendent of the U.S. Naval Academy after deciding that his leadership had been undermined by the findings of a Navy investigation into his behavior, the Navy's top officer said Thursday.

"His view was that this had impacted his ability to lead there, and I agreed," Adm. Vern Clark, the chief of naval operations, said in an interview with a group of Pentagon reporters one day after the Navy announced Naughton's resignation.

"The judgment was that the best thing for him to do was to step aside," Clark added.

The Navy investigation concluded that Naughton had used "unlawful force" in causing "bodily harm" to a Marine sentry at the academy on New Year's Eve by grabbing the man's hand during a confrontation over Naughton's identification card. It also found that he had been overly confrontational — but not physical — in meetings with subordinates.

Clark said Naughton, who headed the academy in Annapolis, Md., for only one year, submitted his resignation Tuesday and will retire from active duty.

A Navy inspector general's investigation began Feb. 28 after Naughton was accused of improper contact with the sentry. The investigation supported the allegation, although Naughton testified that he had acted properly.

In a statement issued by the academy, Naughton said: "Over the past few months, too much attention has been focused by media and others on the superintendent. Because of this attention, I have asked the chief of naval operations to reassign me elsewhere and to bring in new leadership that can take the academy where it needs to go."

Naughton is a 1968 graduate of the academy and flew fighter jets for much of his career.

The inspector general's investigation report included testimony from witnesses, including the unidentified sentry, who said Naughton, who was dressed in civilian clothes and with a group of friends, became upset after the guard asked for his identification as he approached an entry gate.

The investigation concluded that Naughton "did bodily harm" to the sentry by grabbing his hand and that this was done with unlawful force. It said bodily harm is defined in military regulations as "offensive touching of another, however slight." Naughton told investigators that he did nothing wrong, did not recall having touched the sentry and believed the sentry had smirked at him.

A copy of the inspector general's report, dated April 3, was released after the Navy's announcement.

The inspector general also concluded that Naughton on several official occasions "embarrassed and humiliated subordinates through conduct that is inappropriate for a commander."

The investigators said there was "general agreement among critics and defenders alike" that at many meetings Naughton would "question his subordinates with intensity, with a raised voice and in an aggressive tone." He did not curse, call people names or scream, it said.

"Not everyone found his style inappropriate," the investigators reported. "There were those who testified that they have never seen the admiral act inappropriately. One of those individuals, a senior official, stated that in his opinion the admiral's detail-oriented focus on financial matters was `long overdue"' and he should be applauded for it.

The investigators concluded Naughton failed to live up to his obligation to "promote the morale and well being" of his subordinates. "We find that the testimonial evidence, outlined above, shows conduct that is at times confrontational and demeaning," the report said.

The report was reviewed by Adm. William J. Fallon, the vice chief of naval operations, who agreed with the conclusion of improper contact with the Marine sentry. Fallon met with Naughton on May 28 and "counseled him on his lapse in judgment and conduct," the Navy said.

Fallon did not agree with the investigators' conclusion that Naughton failed to promote good morale.

Naval Academy spokesman Cmdr. Rod Gibbons said: "Today's announcement came as a surprise. Vice Adm. Naughton is well respected, and we will be sad to see him leave."

Naughton will be temporarily replaced by Vice Adm. Charles W. Moore Jr., who is head of the Navy's logistics office at the Pentagon, until a successor can be nominated and confirmed by the Senate.

A native of Cedar Rapids, Iowa, Naughton entered the Naval Academy in 1964. Before being named Naval Academy superintendent last June, he was in charge of the Naval Strike and Air Warfare Center, a "Top Gun" training ground for Navy pilots in Nevada.

Naughton also served as executive officer and commander of the aircraft carrier USS Enterprise. During the 1991 Persian Gulf War he commanded the USS New Orleans, which landed Marines in Kuwait and led mine-clearing operations in Kuwait's harbor.