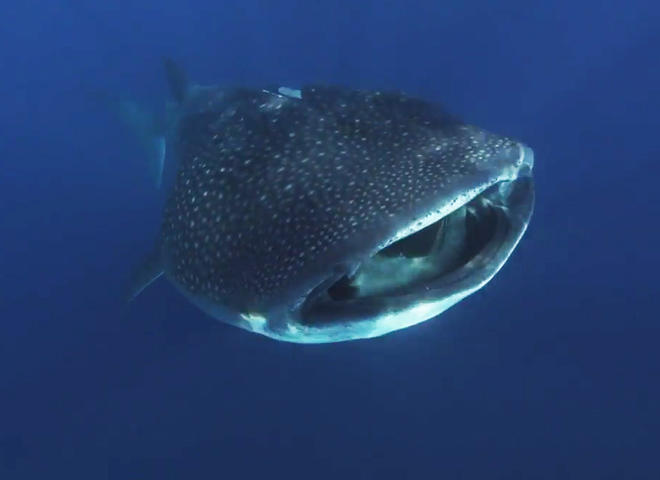 Isla Mujeres is a small island 13 kilometers from Mexico’s Yucatan Peninsula. When the Spanish first came to the island they found a number of goddess images, so they named it Isla Mujeres, the Isle of Women. Many of the images were of the goddess Ix Chel, the goddess of making children. She was also important to the physicians and shamans as the goddess of medicine. The island of Cozumel, near Isla Mujeres, was an important pilgrimage site for Mayan women hoping to have a fruitful marriage.

I first visited Isla Mujeres in 1978 to celebrate getting my M.S. in biology. We snorkeled a lot and enjoyed a week of getting sunburned and eating seafood. If I had had a clue there were whale sharks in the surrounding waters, I would have been begging some boat captain to take me out to see them. Now that I do know they are there, I am planning my trip.

Whale sharks, in my estimation, are the most amazing fish on earth. They can grow to over 40 feet in length, making them the largest fish in the world, and second only to whales in size. They have thousands of tiny teeth which serve no function, and filtering pads that work to filter small organisms (such as plankton, fish eggs and small fish) out of the water. Some whale sharks have learned to suck small fish out of fishermen’s nets. Because of their feeding method, they are no danger to humans.

Like some other sharks, whale sharks are ovoviviparous -- one of my favorite words. Birds produce shelled eggs and then incubate them until they hatch. Mammals (including humans) produce eggs which are fertilized internally and retained in the uterus where the placenta nourishes the developing embryo. When that embryo has grown enough to survive outside its mother, the mother gives birth.

Ovoviviparous animals utilize a combination of those two methods: The female produces eggs which are fertilized internally, and then she produces an egg case or shell surrounding the fertilized egg and nutrients. She retains the egg inside her while it develops, but she does not provide any nutrients for the eggs as they develop. When the eggs hatch, the babies emerge from the female. It looks like the same type of live birth as is found in mammals, the difference being she has no placenta to provide nutrients as the baby develops.

She protects them as they develop, but she doesn’t feed them!

The organization Ecocean has adapted a computer program (originally developed by NASA as a pattern recognition system to identify star fields) to identify the unique pattern of white spots behind the gills of whale sharks.

The library is used by marine biologists to collect and analyze whale shark sighting data to learn more about these amazing creatures. As of this writing, they have received 35,929 photographs of 7,789 separate whale sharks. I now have a new mission to photograph a whale shark. Mostly it is an excuse just to see one. Would you like to help? It’s easy. Find a whale shark, take a photograph of the spot pattern behind its gills, then go to whaleshark.org and submit your photo.

Want to swim with a whale shark and get a photo to ID it? They live in all of the oceans in the tropics near the equator. They congregate seasonally to feed near a number of islands and in several bays around the world. For people in the U.S., some of the easiest areas to get to are the Sea of Cortez (especially Bahia de Los Angeles) in Baja California, Mexico; in the Caribbean near Isla Mujeres in Yucatan, Mexico; Isla Holbox, Mexico; Utila, Honduras; and Gladden Spit and Silk Cayes Marine Reserve, 22 kilometers from the coast of Placencia, Belize. Do your homework to be sure you go when the sharks are there!

Remarkable friendships from the animal world
Thanks for reading CBS NEWS.
Create your free account or log in
for more features.
View CBS News In
CBS News App Open
Chrome Safari Continue
Be the first to know
Get browser notifications for breaking news, live events, and exclusive reporting.