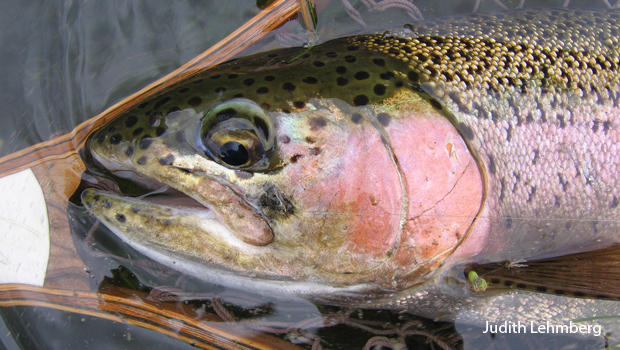 A recent "Sunday Morning" Moment of Nature highlighted brook trout in the Sierra Nevada Mountains of California (see below).  With their bright red and orange abdomens, orange fins trimmed in black, and sides sprinkled with yellow and red dots, they flash through the water like little jewels. Brook trout are native to the U.S., but not California, so their introduction is not without controversy.

Fish introduction into new places has been going on for literally centuries. Over the years, ideas have gradually evolved from "If there aren't any fish in a lake or stream, stock it," to "Native fish have rights, too." Well over 100 years ago, native fish began to decline as the U.S. human population expanded to the West and more and more resources were exploited. Increased stream sediments from over-logging, stream channelization, raw sewage and other human-caused problems resulted in a notable decline of native fish – fish that many organisms, not just humans, depend on as an important protein source. Rather than face the issues caused by over-use and abuse, politicians decided it was easier to find a fish that could survive in dirty, low-oxygen water.

President Ulysses S. Grant initiated the creation of the U.S. Commission of Fish and Fisheries in 1871. The government had already been receiving over 2,000 letters each year complaining about the fish decline and looking for answers. That decline was solved by the introduction of a fish at the opposite end of the beauty scale from the brook trout, the carp. Although carp had already been spread to many countries, they are originally from Asia. They had been introduced into England before the time of Isaac Walton, who wrote in 1653:

"The Carp is the queen of rivers; a stately, a good, and a very subtle fish; that was not at first bred, nor hath been long in England, but is now naturalized."

Carp are still revered in England and are the most commonly-caught fish there. They made it into North America by 1833, but their numbers vastly increased once the U.S. Fish Commission began importing them, along with other species, such as German brown trout, in the 1880s. Carp were quickly embraced as a food fish when it was discovered they could live in highly degraded water where native fish could not. Initially they were considered a delicacy by the rich, but once they became common in muddy water many people thought their taste declined and the carp fell out of favor.

That didn't stop their populations from increasing, however. Today they are found in every state except Alaska and have caused the decline of native species from walleye and pike to rainbow and cutthroat trout. Most states today consider them a pest because of their abundance and detrimental effects on aquatic habitats. (They are still revered as a sport fish in Europe and China.)

Watch this 2009 CBS News report by Dean Reynolds about protecting Lake Michigan from an invasion of Asian carp:

A number of trout species have been introduced as well. European brown trout were planted in streams wherever the English Union Jack flew, called by some "ecological imperialism." As a result, brown trout can now be found in cold water streams in the U.S., Canada, Kenya, New Zealand, India, Tasmania and South Africa. Anglers consider them a desirable fish because they are good fighters, can be elusive and grow to large sizes. They have caused a considerable decline of native fish, especially native trout (such as rainbows, cutthroats and brook trout) in the U.S.

Originally brook trout were native to only the eastern parts of the U.S. but they, like so many other fish species have been moved to many western streams by humans, again mostly by the Fish Commission. At the same time California rainbow trout, primarily from the McCloud River, were transported to the same countries as brown trout, and to much of the rest of the U.S. All three species (brook, brown and rainbow trout) were moved to new streams, and some lakes, primarily for sport fishing.

The plus side of these plantings was a big benefit to trout sports fishers. Many high-altitude lakes and streams in the High Sierras, Yellowstone, and other Rocky Mountain areas were originally fishless, and sport fishers welcomed the chance to expand the waters in which they fished.  Brook trout in California are considered a success in the high Sierra Nevada lakes and the Klamath and Feather River watersheds. And fish predators benefited, as this expanded the range that otters, eagles and ospreys could fish (as well as their human competitors).

The negative side of the trout introductions is the detrimental effect on species already living in the watersheds. Fishless alpine lakes may not have held native fish, but the effects on native frogs and invertebrates, when a new predator was put into their homes, was sometimes catastrophic. California yellow-legged frogs are gone from over 90% of their original habitat, primarily because of introduced trout. Zooplankton and macro invertebrates are also affected. Competition between existing trout species and introduced species often does not favor the native. Cutthroat trout subspecies (including Bonneville, Yellowstone, Greenback and Westslope cutthroat) have all been negatively affected by introduced brook and brown trout, and some hybridize with rainbows, diluting their gene pool.

With a history of people meddling in aquatic environments, do the successes outweigh the detrimental effects?  Disasters such as lake trout introduction into Yellowstone Lake, once the home of the largest Yellowstone cutthroat population on Earth, has caused a greater than 90% decline in the latter species.  The National Park Service has been fighting the lake trout for over two decades at a cost of several million dollars each year. As the lake trout population declines, the cutthroat are making a comeback, but it is a long, never-ending battle.

So, it is a difficult question to answer. Anglers who just want to catch big fish would say the non-natives have been a success; biologists and others concerned about the decline in native species would disagree.

For a more complete story of the lake trout introduction into Yellowstone Lake, click on the video player below:

A giant step forward for users of artificial legs