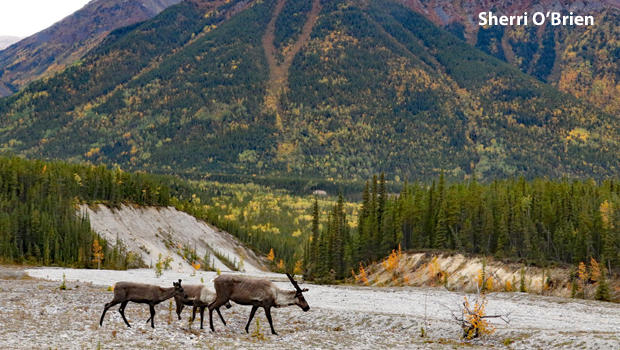 In 1975, on the last day of my first year of teaching biology, a colleague and I began planning a summer trip. We were 22 years old and had never been anywhere outside the state of Texas, except to visit relatives. Now we had a whole summer in front of us. We started with the idea of a camping trip to Colorado using my future-husband's 1969 red hippie Volkswagen van. By the time the day was over we were going to Alaska.

We left Huntsville, Texas, with $500 each, no credit cards, and more excitement than sense. But we made it to Alaska – 5,000 miles in seven days.

This was obviously before cell phones, and our only way of reaching our families to assure them we were okay was the occasional two-way radio. It was also before the Alcan Highway was paved, so we had 1,500 miles of gravel road that vibrated the coil off that VW engine three times. Each time it fell off, the engine quit. The first time it happened a trucker stopped, figured out what had happened, found the coil, and showed us how to put it back on. The next two times we walked back, found the coil, put it back on, and were on our way. We saw the most gorgeous mountains, rivers and forests we could have ever imagined. We also saw huge moose, a glimpse of a wolverine, a gigantic wolf, and our first small herd of caribou standing on the Alcan Highway, licking salt.

We also saw caribou in Mt. McKinley (now Denali) National Park – large, majestic, gentle-looking animals with the most graceful antlers we had ever seen.

Caribou and reindeer are the same animal. Some people call the semi-domesticated version (and of course the ones that pull Santa's sleigh) reindeer. People in the western world call all of them caribou, but they are reindeer in Europe. Whatever we call them, they are a circumpolar species that does have a number of subspecies, but they are all the same species – an animal exquisitely adapted to its cold, snowy, relatively unproductive environment.

I've always wanted an excuse to talk about rete mirabile, and now I've finally gotten my chance. Santa's reindeer have rete mirabile, just one of their adaptations allowing them to survive their cold Arctic environment. It's not just that rete mirabile are super-neat. It is more that I just love to say "rete mirabile." It's right up there with gastrocnemius and Ngorongoro. Rete mirabile, "miraculous net," is a countercurrent exchange system in the nose and legs of a number of Arctic mammals, including caribou. The net is formed by arteries and veins intertwined in such a way that the heat from the arterial blood is released and then captured by the venous blood as it returns to the heart.  Caribou rete mirabile are so effective that even in the coldest winters their core body temperature is 38 degrees C (100°F), while the temperature of their feet is 9 degrees C (48°F), a considerable difference.

Their feet are also adapted to wet, soft snow and tundra. During the winter, their hooves get longer and their foot pads shrink, so there is less surface area from which to lose heat. In the spring, their hooves shorten and their foot pads expand, making it easier for them to walk on the melting tundra's boggy areas, as well as on wet snow. Like other even-toed ungulates, caribou have two toes and two dew claws, which are really just two other toes that are reduced in size. Caribou dew claws are larger than those of other antelope, cows, goats, etc., to give them more surface area on boggy ground and snow.

Another feature of their feet (that no one appears to know if there is a function for or not) is that the tendons in their ankles make a clicking noise as they catch on a sesamoid bone. The clicking can be heard at least ten yards away. Can you imagine what a herd of thousands of caribou must sound like when they're walking?

Caribou are unique in that they are the only deer where both the males and the females have antlers. Males generally have larger antlers and grow and shed them at different times than the females. Male antlers begin growing in March and are completely grown, and hardened, by the fall mating season, when males use them to establish territory and fight for mates. They begin shedding them in December, and by February most males have lost their antlers. The females grow their antlers from June to September but don't shed them until they give birth in the spring, or sometimes even later. Once the males have shed their antlers, the females begin to act more dominant and gain more access to better feeding areas.

Most caribou migrate from one feeding area to another, and to calving grounds. In the spring, they feed primarily on sedges, grasses, willow and birch leaves, tundra plants and mushrooms. In the fall and winter, they change their diet to what is available – lichens (reindeer moss), small shrubs (especially blueberries), and dried sedges. They are the only mammal known to produce lichenase, an enzyme for digesting lichens (something they have in common with snails). Some Canadian caribou are the longest-known terrestrial migrants moving up to 3,000 miles each year, whereas some don't migrate at all.

Almost all caribou populations are declining in the United States, primarily Alaska. There were 4.7 million in 2003. By 2017 that number was down 56%, to 2.1 million. The decline appears to be due to global warming, which has caused drier conditions and therefore less food and more susceptibility to diseases, parasites and predators. However, the Porcupine herd in northeastern Alaska and western Canada has remained stable, while some Canadian and Russian herds are nearing extinction.