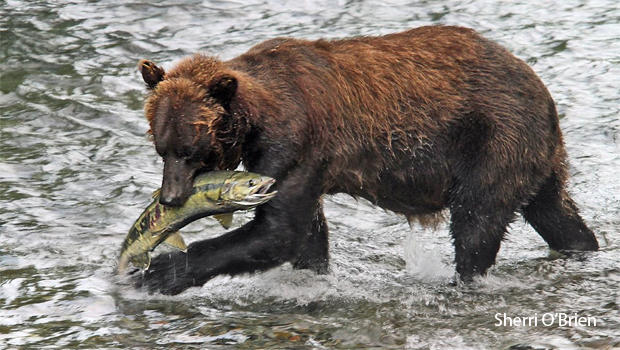 Salmon have always held a fascination for me that is difficult to express. They are, at the very least, majestic. I began my love affair with them 40 years ago when I learned to fly fish and tie flies. I have caught a few Pacific salmon on my own flies in Alaska, which was wonderful, except for the one time I looked up with a salmon on and saw an Alaskan brown bear at the river's edge about 15 feet away huffing at me. I assumed it wanted my fish, so I quickly broke it off and got out of there. (Meanwhile, the only Atlantic salmon I've ever seen was in a can.)

Now, imagine that when your mother was pregnant with you she took a trip from Phoenix to San Francisco and gave birth to you there. Then you both returned to Phoenix. Now imagine 15 years later you decide to go to San Francisco, but you can't use a GPS device, or a list of directions, or a map or any other means of navigation. You just go. And you successfully make it there. Impossible, right? Yes, impossible, because you are not a salmon.

Salmon are anadromous – that is, they spend their adult life in the ocean, but when they are ready to reproduce they return to their natal stream. No directions, no map, they just go. And they successfully return to their birthplace to spawn.

Salmon live in both the Atlantic and Pacific Oceans, and both groups (in the family Salmonidae) are similar in a number of ways, spending their adult lives in their respective oceans, then going up rivers and creeks to spawn. That's where the similarities end.

There is only one species of salmon in the Atlantic Ocean, the Atlantic salmon; it goes up rivers on both sides of the northern Atlantic to spawn. We used to have a healthy population of Atlantic salmon along the northern U.S. coast and in our northeastern rivers until we built so many dams most salmon could no longer make it to their spawning grounds.

Evolutionarily, there is a substantial reason for this difference. Nutrient-rich limestone is common on both sides of the Atlantic, providing nutrients for newly-hatched salmon fry. That is not the case on the Pacific side, where low-nutrient granitic soils – common on the Pacific coast of the U.S. and Canada – fail to provide enough nutrients for baby salmon. Therefore, adult salmon make the ultimate sacrifice for their offspring. It isn't uncommon to see "spawned out" salmon with pieces of skin literally falling off. Do they consciously die so their young survive? Obviously not. But over many millennia evolution has selected for the fish that die after spawning because their babies (who get about 50% of their nutrients from their dead parents) can survive. The adults' contribution of food to their offspring is also essential to the health of the surrounding forests, and the animals who live there. That's why they are considered keystone species.

We've all heard the expression "Does a bear s**t in the woods?" and we know the answer is absolutely. The importance of that is difficult to understate. Because the soils in the northwest are nutrient-poor, the bears' droppings, as well as the uneaten salmon it leaves in the forests, literally bring nutrients from the streams to the land that are then broken down and become the basis of the forest food web.

Due to over-fishing and dams, wild salmon have declined by 90% in Washington, Oregon and California. That decline has a much broader effect than what might be expected. Salmon need forests for shade, to keep streams cool, and forests need salmon to provide between 25% and 50% of their nutrients, particularly nitrogen essential for protein production. A few dams have been taken down and the salmon have returned, but more dams need to come down to have a significant impact on both the salmon and the forests.

To learn more about keystone species I recommend the PBS Nature documentary "The Serengeti Rules." To watch a trailer click on the video player below: