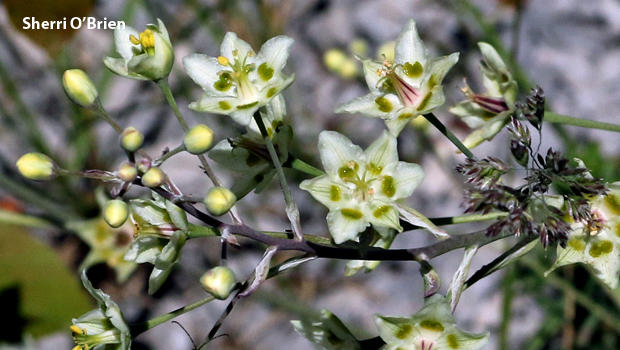 Letchworth State Park in northeastern New York was named for William Letchworth, who'd donated his 1,000-acre estate, which became the core of the park. It is sometimes called the "Grand Canyon of the East" because, although the Grand Canyon is much deeper, the Genesee River has cut a 550-foot canyon through it with three stunning waterfalls. The park also features more than 50 other waterfalls on tributaries of the Genesee.

Although it is known for its spectacular geology, it also has more than 40 species of rare plants. They aren't commonly seen, which is part of what makes them so special, along with some of the plants' unusual characteristics.

Most plants use carbon dioxide, chlorophyll, water, soil nutrients and sunlight to make food during the process of photosynthesis. But there are a few plants that forgot the basic rules of how to be a plant, and one way or another steal food from other organisms. There are several Letchworth plants that have learned those tricks. One of them is pinedrops. It has no chlorophyll and therefore cannot carry on photosynthesis. It survives strictly by stealing food from a species of underground fungi. That is one of the reasons it is uncommon; it can only live where fungi in the genus Rhizopogon survive.

Rhizopogon and pinedrops form a type of mycorrhizal, or symbiotic, relationship. Most plants have a fungi living with them, either attached to their roots or actually growing into their roots. Those relationships are normally mutualistic (where both species benefit); the plant contributes food to the fungi, and the fungi acts like roots for the plant. But in the case of pinedrops, the relationship is parasitic. Pinedrops take food from the fungi and the fungi gets nothing in return.

Scarlet Indian paintbrush also steals nutrients, not from a fungi, but from the roots of other plants. It does, however, make chlorophyll and carry on photosynthesis, just not enough for it to survive without stealing nutrients from host plants, such as grama grass, June grass and other wildflower species. Look closely at an Indian paintbrush and you will notice red-tipped leaflets that look a bit like flowers but have no male or female flower parts. Indian paintbrush plants can afford to make those leaflets as an aid in attracting pollinators because of the extra nutrients they get from their host plants.

Another Letchworth plant steals nutrients in a much different way than pinedrops or Indian paintbrush. Butterworts are carnivorous! They lure insects to the plant and then digest and absorb the nutrients from them.

Carnivorous plants can be divided into two groups, either passive or active. Venus fly traps are active (their leaves close quickly around an insect and trap it); butterworts, with no moving parts, are passive. They have sticky glandular structures on their leaves that trap insects, and then they secrete enzymes to digest their prey.

Death camas is another rare Letchworth plant with a totally different way of surviving and passing on its genes. We know plants produce some unique and diverse chemicals, everything from the THC made by marijuana to creosote produced by pines and other species. It is impossible to say exactly why they produce the chemicals they do, but one thing is fairly obvious: plants can't get up and move when someone is eating them. In the case of marijuana, they can get their predators so stoned the animal may not be able to find the plant again.

Death camas takes a different approach. It kills anyone who eats it and does it in relatively small doses. Even its pollen is poisonous to all except maybe the death camas bee, and it may, in fact, be poisonous even to its only pollinator. The death camas bee is a ground-nesting species. It collects pollen from death camas plants, digs a hole, puts an egg and a package of pollen in that hole and leaves, never to return. When its larva hatches it eats the pollen, getting enough energy to change into an adult bee. No one knows for sure, but the pollen may lose its toxins by the time the egg hatches. The reasoning for that is, adult death camas bees don't eat death camas pollen or nectar. They eat the pollen and nectar from other plants.