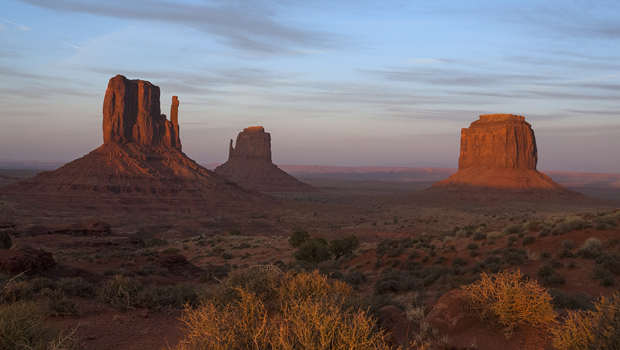 On the border between Arizona and Utah, near Four Corners, lies a stunning series of rock formations: Monument Valley, a Navajo Nation Park.

Monument Valley is probably best known to many Americans from having been seen in more Western movies than any other location in the U.S. Most visitors to Monument Valley are immediately taken back to old John Ford films, including "The Searchers," "Stagecoach," and "She Wore a Yellow Ribbon."

The valley's pinnacles became synonymous with the Old West in theatergoers' minds, but they've also been used as a backdrop in other film genres, appearing in "Forrest Gump," "2001: A Space Odyssey," "Easy Rider," and "Back to the Future Part III," among countless others.

Geologically, Monument Valley is a combination of rock layers formed during the Permian and Triassic Periods several hundred million years ago that have been subjected to differential erosion (by which hard rocks erode more slowly than soft rocks). The results can be quite complex and stunningly beautiful.

Because Monument Valley was formed from several layers of rock with varying hardness, we are left with magnificently sculpted buttes, the result of millions of years of simple erosion by water, wind and varying temperature.

The valley floor is sand and siltstone stained with red iron oxide. It was formed during the Permian Period when the area was an ocean, and is today known as Cedar Mesa Sandstone. The buttes above the valley floor are layered, with the lowest strata being easily erodible Organ Rock Shale formed during the late Permian Period when rivers carried sediment from the ancestral Rocky Mountains.

A thin layer of Moenkopi Sandstone covers the de Chelly layer. Moenkopi Sandstone formed during the early Triassic, when streams flowing from nearby uplands deposited sediments of sandstone and shale with gypsum layers in-between. A number of fish, amphibian and reptilian fossils have been found in Moenkopi formations.

Because Monument Valley is located in an arid region of North America it will last longer than it would if it were in a wetter area -- less water equals slower erosion.

This wondrous landscape of buttes, pinnacles of rocks, and changing colors has another origin story in the Navajo culture. In one complex narrative, Navajo elders tell of their people emerging into the Fourth World and the Hero Twins killing monsters which inhabited that world; the carcasses of those monsters turned into the stone buttes of Monument Valley.

One bird species found in Monument Valley is the mockingbird. Although they are not particularly colorful birds, they make up for their lack of beauty with some interesting behaviors. As their name implies, they mimic many other birds and also do a great job of imitating sounds in their environment, from car horns and alarm clocks to lawnmowers and rusty gates. Their ability to imitate sounds is unrivaled in the bird world (with the possible exception of pet parrots who must be taught).

Mockingbirds not only imitate bird calls and other sounds; they also spend a lot of time repeating those sounds, even in the middle of the night. The males do most of the vocalizing, probably to attract a mate.

Mockingbirds eat mostly insects and berries. They normally hunt on the ground by walking a short distance and then opening their wings in a highly-ritualized series of motions to show the white of their wing. This is believed to surprise prey just long enough to allow the bird to capture it.

Mockingbirds always seem to have the attitude "I am the biggest, toughest guy around and the rest of you had better leave." They have even been known to fly at humans, and the particularly nervy ones will peck their perceived enemy. I had a friend in graduate school who was afraid to walk out of the biology building by herself. After walking with her several times, I learned why: A mockingbird repeatedly dove at her and pecked her head hard enough to draw blood. It totally ignored me, thankfully.