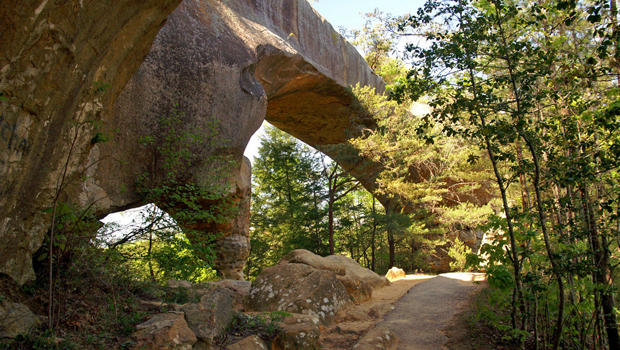 Holes worn in softer, lower sandstone layers have produced more than 100 natural arches in the gorge -- unique formations in the eastern United States.

This area was so much admired by nature enthusiasts that it was incorporated into the Wild and Scenic River System in 1993, after much publicity was generated by the Sierra Club, author Wendell Berry and Supreme Court Justice William O. Douglas. Hidden by the dense vegetation, small depressions and caves have been hollowed out by the elements. These shelters -- weathered softer sandstone roofed with harder sandstone -- have been utilized by humans for over 11,000 years.

Kentucky is known for its beautiful bluegrass farms, horses, forests, and whisky distilleries, along with a rich history of moonshine-making. Since the time of George Washington and the Whisky Rebellion of 1791, some farmers converted their corn to more easily-transportable whisky. They also wanted to evade the onerous tax on whisky by hiding their distilling operations in the dense hilly forests of Appalachia.  Many sites in eastern Kentucky, including in the beautiful Red River Gorge, have names reflecting those hidden operations, including Moonshine Cave, Moonshiners Arch, and Bear Pen Still. These whisky makers used all sorts of tricks to deceive the federal tax agents by hiding their distilling operations in caves and dense forests. Today hikers sometimes stumble upon the remains of old stills from the Prohibition Era as they explore these awe-inspiring hills and gorges.  They also find a wealth of plant life, including several lady's slipper orchids.

Orchids make up one of the larger plant families, with at least 28,000 species. Many are not common, as they require very particular soil types and will not grow unless an exact species of fungi is present. Also, many orchids have no nectar to attract pollinators and very tiny seeds that do not germinate well. Rather than producing calorically expensive nectar, some orchids, including lady slippers, have evolved an effective method of attracting pollinators through deception.

Bumblebees, usually newly-emerged naive ones, are attracted to the sweet-smelling flowers.  They push their way through the slit of the orchid's lower slipper-shaped petal and are trapped in the pouch. Because this lower petal folds inward, once inside bees cannot get back out the way they entered.  Since they don't find any nectar all they want to do is escape. Hairs guide the frustrated bumblebee upward towards a constricted opening at the top of the slipper.  If the bee has any pollen from another lady's slipper, it is scraped off onto the stigma in the constricted part of the flower. (The stigma is the tip of the female part of the flower.)

As the bee squeezes out of the flower, fresh pollen from the orchid's anthers adheres to its back.  Thus the flower forces the bee to pollinate it and carry its pollen off, hopefully to another lady's slipper. The bees will learn, after a couple of visits, to avoid these non-rewarding orchids. Consequently, the fruit set is usually very low (less than 10%). Since the seeds are tiny and carried by the wind, even this low pollination percentage generates tremendous seed numbers, and is sufficient to produce the next generation.