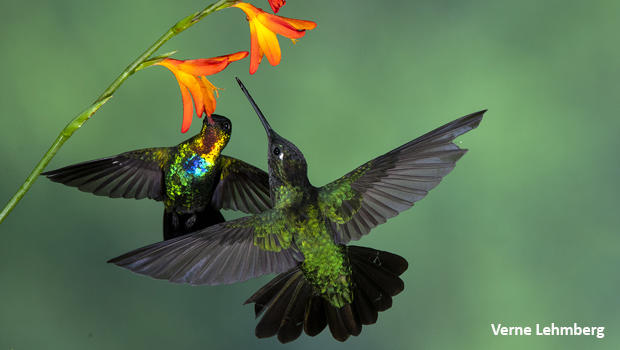 If you watch the accompanying video the first three seconds have been slowed down three times. During that time the larger of the two hummingbirds, the lesser violet-eared, beats its wings about 85 times in three seconds. The short segment following is at regular speed of the same bird. Right after that, at about 11 seconds, is a talamanca hummingbird, a significantly larger bird with slightly slower wing beats.

Hummingbirds live fast, they fly fast, they eat fast, they eat a lot, and they digest food quickly. They have to, or they would starve to death because their metabolic rate is so high. There is not complete agreement in the scientific world about exactly how much they have to eat, and there is a significant size variation in the almost 330 hummingbird species, from the smallest (the endemic Cuban bee hummingbird, at .056 - 071 ounces), to the appropriately-named giant hummingbird, in the Andes, which weighs in at .63 - .85 ounces, making the latter about twelve times bigger than the former. But there is no doubt they eat a lot.

If a human had as high a metabolic rate as a hummingbird, it would have to eat somewhere between 100,000 to 150,000 calories a day, the equivalent of around 250 Big Macs, and excrete 20 gallons of water, each day. We would be like hummingbirds in the sense we would have to spend the majority of each day eating and drinking and digesting and going to the bathroom, a lot. Sounds pretty time consuming, not to mention expensive.

After watching the hummingbirds fight at my feeders and a number of bird-watching spots throughout North, Central and South America, it strikes me that if a hummingbird weighed five pounds and still zipped around with that sharp bill, I would be scared to death of them. It turns out I have reason to be, especially south of our border. I say that because It was recently discovered that some Central and South American male hummingbirds have a bill better adapted for fighting than eating.

The average hummingbird has a soft, slightly curved, blunt bill tip, to better scoop nectar out of flowers, and a tongue which can fork to slurp up as much nectar as possible. Much hummingbird research over the years has focused on the relationship between one hummingbird species and the flowers they visit. Biologists know that some flowers and hummingbirds underwent co-evolution – that is, the shape of a hummingbird's bill fits only specific flowers. They evolved together. But new research shows that some hummingbirds, especially the males, have bills better adapted for fighting, even at the cost of making it more difficult for them to eat.

Not all hummingbird species have been examined, but some in Peru, Columbia, Brazil and Costa Rica have bills equipped with serrations on the edge of their bills, sharp tips, and hard bills that are not at all efficient for drinking nectar, but make excellent swords and biting tools. Scientists have observed these hummingbirds jousting, fencing, biting and even pulling feathers out of their rivals. Some male hummingbirds are even more aerodynamic than the females of the same species.

And they don't fight just to protect their food sources. They also fight at leks. According to UC Berkeley ornithologist Alejandro Rico-Guevara, "A lek is like a singles bar. If you can get a seat at that bar, it is going to give you the opportunity to reproduce. So, they don't fight for access to resources, like in the territorial species, but they actually fight for an opportunity to reproduce. And in the brief moments when there is no fighting, they go to feed on different flowers."

The latter section of the accompanying video exemplifies several different hummingbirds either reacting to other hummingbird males or fighting with other males. Most of them are lesser violet-eared hummingbirds capable of flaring several blue-violet feathers near their ears. I've always thought of it as their way of giving each other the birdie finger.

Hummingbirds can be found all over the U.S. and are very entertaining to watch. It is easy to attract them. Boil a cup of water and add 1/2 cup of sugar. The boiling helps eliminate bacteria and fungi to keep the sugar water fresher longer. Don't use the commercial hummingbird food, as it contains red dyes which can damage the birds' kidneys. The red on the feeder, or even a few drops of red paint near the feeding holes, will attract them. (I have a small red dot on my binoculars that is part of the brand logo. Hummingbirds check it out all the time while I'm bird watching.) Thoroughly clean the feeder at least once a week and refill it with fresh boiled and cooled sugar water. An additional close open, wide container of water will provide them a place to drink and bathe, which they do frequently.