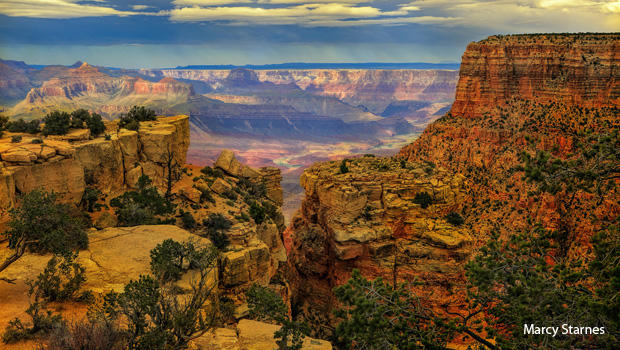 Visitors to the Grand Canyon expect to see its vast beauty, majestic vistas and stunning colors, but it is also a perfect place to see samples of many of Earth's ecosystems as they border each other from the top of the canyon to the bottom. If you were to take a trip down the canyon from the north side, you walk through five ecosystems: the boreal forest, the ponderosa pine forest, the pinyon-juniper woodland, desert scrub, and desert.

During that trip you would journey 6,000 feet and two billion years of geological time. The geology, plants and animals of the canyon vary with elevation, but while the geology is a result of sediments deposited millions of years ago, the plants and animals present are a result of altitude, temperature, soil type and the availability of water. Just as the canyon is a self-contained geology lesson, it is also a lesson in ecosystems.

An ecosystem is a unique combination of living and nonliving parts that give an area its distinctive characteristics, including plants and animals as well as soil type, the amount of moisture, and temperature. Depending on the reference there are between six and 30 ecosystem types on Earth, but most authors put the number somewhere closer to ten. Biologists agree the Grand Canyon contains five ecosystems: the Canadian, Hudsonian, Transition, Upper Sonoran and Lower Sonoran. To see these ecosystems outside of the canyon you would have to travel from Mexico to Canada. Of course, to see all of them up close in the canyon, you have to do some walking or take a mule. (I much prefer walking as the people on the mules generally don't look very happy.)

Above the north rim of the canyon is boreal forest (Canadian). It occurs above 8,200 feet and gets more rain and snow – up to 12 feet – than any of the other canyon ecosystems, and is also colder than all the others. Here you can wander through aspen groves, Englemann spruce and Douglas fir. Some of the animals present are mountain lions, mule deer and long-tail voles.

Ponderosa pine (Hudsonian) are indicative of the next ecosystem. They are found from the top of the canyon, around 8,200 to 6,500 feet. Mountain lions, mule deer and Kaibab squirrels are all found in this zone.

In fact Kaibab squirrels are found nowhere else on Earth other than on the north rim of the Grand Canyon, where they have become geographically isolated, literally trapped by their surrounding environment. The squirrels live on the Kaibab Plateau on the north side of the canyon. It is surrounded by the canyon on one side and desert on all the other sides. Kaibab squirrels can't survive in the desert or the canyon, so they will never be able to extend their range. So, how did they get there?

They are a result of years of geological and evolutionary change. Millions of years ago, before the Colorado River existed, one species of squirrel lived in what is now the entire Grand Canyon region. At least six million years ago, maybe more, what much later became the Colorado River cut through the area. Over the following years uplift caused the formation of a canyon as the river cut through, permanently dividing the squirrel population. As the uplift continued conditions changed along with evolutionary pressure on the squirrels. These pressures affected the squirrels on one side of the river differently than the ones on the other side. Eventually they became two separate species that cannot interbreed, even when we move them together. The squirrel on the north side is the Kaibab squirrel, and the one on the south side is the Abert's squirrel.

From 6,500 to 4,200 feet is the pinyon pine - juniper woodland (Transition). Gambel oak, elderberry and Mormon tea or Ephedra (a natural source of ephedrine used in some antihistamines) are also here.

Between 4,200 and 2,000 feet the vegetation becomes desert scrub (upper Sonoran), where only plants adapted for dry desert conditions can survive. Desert scrub plants include creosote, ocotillo, mesquite and several species of cactus. Chipmunks, jackrabbits and spotted skunks are found here as well. Skunks use their ability to spray a nasty smelling liquid to deter predators. Spotted skunks release spray differently than most skunks. If they feel threatened they face their adversary, raise the back half of their body while directing their rear end to the threat, and then spray. Beware of skunks standing only on their front legs!

From 2,000 feet to the bottom of the canyon is desert (Lower Sonoran). It also includes the river, which is surrounded by riparian vegetation and animals, such as willows, arrow weed, canyon tree frogs and red-spotted toads.