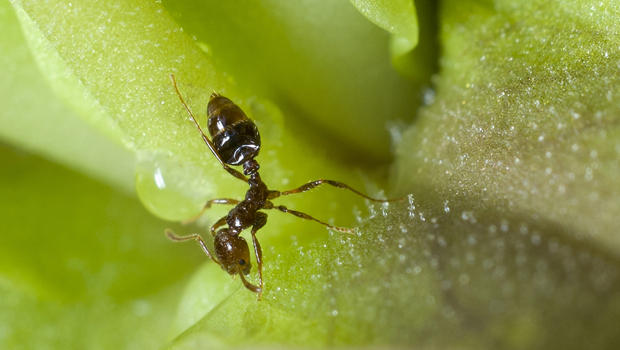 Animals obtain their food in various ways, depending on the species: A single-celled Paramecium can be engulfed by a freshwater shrimp, the shrimp gets eaten by a fish, and the fish can be eaten by an osprey.

Although animals do obtain their food in various ways, they all digest food basically the same way; by producing enzymes which break food down into molecules small enough to be absorbed into their cells. Single celled or multi-celled, simple or complex, we all use enzymes to digest our food.

Most plants get their food an entirely different way, they make it themselves through the process of photosynthesis. They absorb sunlight, carbon dioxide from the atmosphere, water and minerals from the soil, to make all the nutrients they need. Animals cannot make their own food. Plants can. That is why all animals depend on plants for their food whether they are carnivores that eat animals that ate plants or herbivores who eat plants directly.

But what about carnivorous plants? They can obviously get sunlight, carbon dioxide and water, but usually carnivorous plants live in nutrient-poor soil, such as sand, where the amount of nitrogen, phosphorus and potassium is often too low for many plant species to survive.

Butterworts are one of the lesser-known species of carnivorous plants. They trap their dinner with mucous produced by microscopic, globe-shaped glands on their leaves. Those glands also make digestive enzymes.

Butterworts digest their food the same way a venomous snake does – that is, externally. Much of the "poison" in a snake's venom is digestive enzymes.

Snakes literally inject digestive enzymes into their prey before they eat it; butterworts release enzymes to digest their prey while holding them in place with sticky mucous.