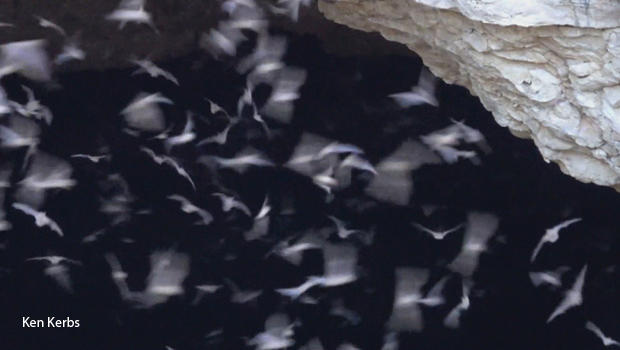 Bracken Bat Cave, northeast of San Antonio, is the summer home of about 20 million insect-eating Mexican free-tailed bats. Bats don't always get the respect they deserve, especially Mexican free-taileds which, even among some bat researchers, are considered the rats of the bat world because they live so closely together in colonies often numbering in the millions, such as those featured in last week's Moment of Nature.

In 1976 I was looking for a Master's thesis topic. I wanted to work with a professor who was studying prolonged sperm storage in female insects with a transmission electron microscope, which I thought would be fun to play with. Once sperm is released into a human female it has about 48 hours to live. Sperm inside a male human are held in place by a viscous fluid that keeps them from moving and using too much energy. But once they get into a female they are on the move, looking for an egg to fertilize.  And females don't provide any nutrients; the spermatozoa quickly wear out and starve to death.

Some female insects, such as honeybees, have a special organ called a spermatheca, which stores and immobilizes sperm to conserve energy, while providing them with nutrients. As a result, their sperm survive for up to five years, and are ready to fertilize eggs at a moment's notice.

I wasn't much interested in insects but knew some other female animals stored sperm for extended times as well. It had recently been discovered that Myotis lucifugus, the little brown bat, was one of them. Maybe some other Myotis species did, too?

I got a rabies vaccine, a school van, a school gas card, and a friend who was working for the same professor and we were off to central Texas armed with the knowledge its limestone caves were home to a number of bat species and little else. We didn't know which species were there and had no idea how to find them. We started asking questions, and eventually found an old, retired spelunker who was invaluable to us, as he knew landowners with caves who willingly gave us access.

The first one had a hole blown in the top of it so guano could be more easily extracted to make gunpowder during the Civil War. It wasn't a large cave and we couldn't find any bats, especially since it was winter and the bats, if they were any, were hibernating.

The third or fourth cave he took us to was Bracken Bat Cave. It was also privately-owned, but he knew the owners. He had a nasty-looking scar on his forearm he'd gotten when, years before, a rattlesnake near the mouth of that cave bit him before his eyes adjusted to the light. He said snakes hung around the opening trying to catch bats on their way in and out of the cave. The bat skeletons hanging on the surrounding yucca plants attested to the fact that there were many, many bats exiting at one time, so many that some were pushed into the surrounding vegetation and, presumably, within snake-striking distance.

Once we were inside it was dead silent. The cave is home to 20 million bats in the summer, but in winter they are happily drinking Piña coladas on a beach in Mexico.

Once my eyes adjusted to the dark, I realized we were standing ankle-deep in dried bat guano, dermestid beetles, and thousands of little bat skeletons. The skeletons were perfect with long, delicate finger bones and the cutest skulls, full of sharp, insect-crunching teeth. I spent the first 20 minutes collecting bat skeletons. Forty-three years later I still have them.

We didn't find any Myotis bats in the Bracken Cave. We found some later in a cave along the Colorado River. I did my Master's thesis on the sperm storage area in the uterus of Myotis velifer, the cave bat.

That's the only time I've been to Bracken Bat Cave, but it's always been one of my favorite places. In the early 1990s, Bat Conservation International (BCI), an Austin-based organization, bought the cave to protect the free-tailed colony. Almost seven years ago, BCI discovered a development company planned to build a huge housing subdivision near the cave, right in the path the bats take when they emerge every night from March to November. The subdivision wouldn't have directly threatened the bats, but because it was in their flight path, it would have brought the bats in contact with the subdivision residents as they searched around street lights for insects, swooped over swimming pools for a drink of water, and been much more likely to be found by a child or cat who would have brought them into contact with other people, making the rare chance of rabies transmission possible and the choice to get an expensive rabies vaccine necessary.

BCI was overwhelmed. Financially it was not able to buy the land, which was not even for sale. They quickly notified their members, and within three weeks 20,000 BCI members signed a petition advocating for the protection of Bracken Cave, packed a San Antonio City Council public forum on the development and got several other conservation organization organizations involved (including Take Care of Texas, the Greater Edwards Aquifer Alliance, and the Nature Conservancy). State and federal legislators got involved as well. The media, as far-ranging as The New York Times and National Public Radio, publicized the situation.

The major turning point came when the San Antonio mayor and city council realized the planned subdivision was critical for recharging the Edwards Aquifer, which had already been dewatered due to a drought and over-use. A large community with lots of concrete above the aquifer would not allow it to recharge. Thankfully, in 2014 TNC bought the land from the would-be developer. San Antonio contributed $5 million of the $20.5 million asking price, and several other agencies contributed as well. BCI agreed to raise at least $5 million.

Today BCI and TNC manage the land, working to make better habitat for the endangered golden-cheeked warbler and improving insect habitat for young bats to feed on as they learn to fly.

Visit Texas Parks and Wildlife for a map and list of places to view bats emerging in Texas.

A map and information on saving Bracken Bat cave is available here.