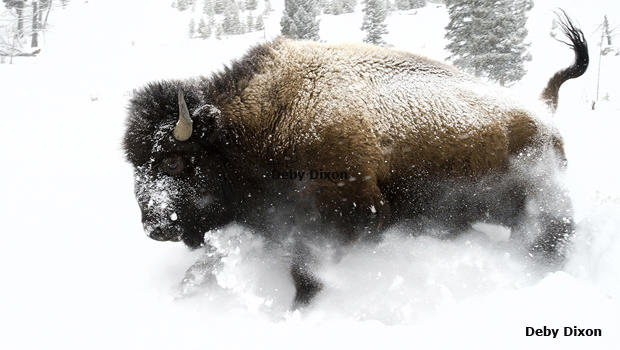 Watching a big male Yellowstone bison use its massive head to move snow out of the way to get to the grass below is an impressive sight. I'm struck by how much effort they must exert to get to a relatively small amount of grass. How they survive long Yellowstone winters is a mystery to me. But they have been doing it for eons.

Although all the bison in North America are the same species (Bison bison), Yellowstone bison are slightly different from plains bison. Often called mountain or wood bison, Yellowstone bison males have a much larger head and more massive shoulders they use like a bulldozer to move snow away from their food. Another way of stating the differences is that the male mountain bison has low surface-to-volume ratios. That is, a male mountain bison has less surface area in comparison to his body's total volume, which allows them to withstand cold better. That isn't true for female and young mountain bison who have higher surface-to-volume ratios than mature males. Maybe that is why the former are more likely to move out of the park to lower, less snowy elevations in the winter. They aren't as well-adapted to the cold. They also aren't as good at moving snow out of the way to get to the grass they need to survive.

Some migrating bison go to the west of Yellowstone, and others go north. The north side of Yellowstone, along with the area north of the park, is attractive to them due to lower elevations (and therefore usually less snow).  But that is also where problems arise. Many Montana ranchers do not want bison near their cattle. There has never been a proven case of transmission between bison and domestic cattle, but bison do carry brucellosis, a bacterial disease that can cause spontaneous abortions in both bison and cattle. Elk also carry brucellosis and migrate outside the park, but have been able to escape the stigma that bison have, maybe because hunters like targeting elk more than they do bison.

The northern herd is essentially trapped in the twelve or so miles between Yellowstone and a canyon, Yankee Jim Canyon, which is so steep the only way the bison could pass through it is on the highway. That highway has a cattle guard – or more accurately, a bison guard – so the animals can't walk into the canyon and move further north. This is done to protect cattle from possible exposure to brucellosis north of Yankee Jim.

There is another problem as well. Based on the fact that they are overgrazing some areas of the park, the Yellowstone bison population is too large. Yellowstone is part of the most intact ecosystem in the lower 48 states resulting in most animal populations being in balance with available resources … except the bison. As a result of their large populations, areas of Yellowstone, especially in Lamar Valley, are over-grazed.

The reasons for this imbalance are not completely understood but the major one may be that there are no longer any predators capable of routinely killing bison. Wolves and grizzly bears do kill bison, especially their calves and the old and sick, but not enough to reduce their effect on the plants the bison eat. Why that's true is not known. Presumably, before the last ice age, dire wolves, saber tooth cats, American lions, short-faced bears and other large predators kept bison populations in check. But they are all extinct now, and the diversity of large predators in North America has declined.

Yellowstone managers have tried to deal with the large bison population for years, while at the same time attempting to appease both those who don't want any bison killed, and the hunters, ranchers and some locals who want the population controlled.

Managers have tried two solutions. When some of the bison (primarily females, because they are the ones effected by brucellosis) leave the park, they are trapped and put in fenced enclosures. The state of Montana mandates they remain in the enclosures for two-and-a-half years during which time they must continue to test negative for brucellosis. Females are more carefully scrutinized, because brucellosis is most readily transmitted by birthing fluids and milk.

The other "solution" is a combination of culling and hunting. Indian tribes can legally kill bison that leave the park. Some are also killed by Montana hunters if they can get a permit. In total, the number of bison killed each year is around 700, though that number varies.

For years Montana Indian tribes have been requesting "surplus" bison from Yellowstone to repopulate their reservations. Their request was finally partially granted last February, when 55 male bison were transported to Fort Peck Indian Reservation in central Montana, where a fenced area has been designated for them. Several weeks ago, 33 more Yellowstone bison were shipped to the same reservation, including 14 pregnant females. The Fort Peck Reservation transferred a few bison to the Wind River Reservation this last summer, and plans to transfer more to other tribes this coming summer. There are still bison in quarantine outside the north side of the park, but some progress has been made to move them to places where they can establish new populations, and hopefully that will continue.