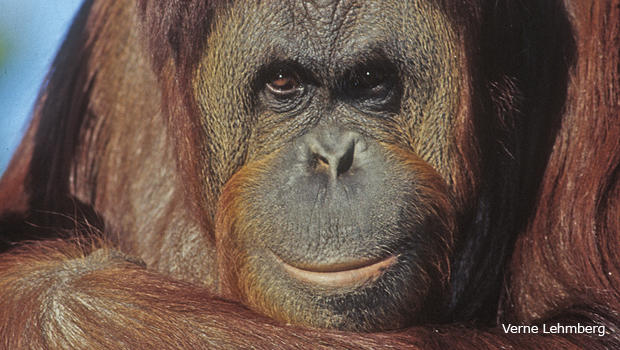 I've been thinking and reading a lot about non-human animal intelligence recently. One thought that continues to run through my head is the meaning of the word "anthropomorphic." The more I think and read, the more I've come to feel it is a word that shouldn't exist.

Anthropomorphic, from anthropos (human) and morphe (form), means attributing human actions and thoughts to non-human animals. Fine. Except, who evolved from whom? Other animals didn't evolve from us. We, Homo sapiens, at a mere 200,000 or so years old, are one of the new kids on this Earth. We didn't directly evolve from wolves or moose or elephants, but they were here first. Therefore, it is logical that our thoughts and emotions evolved later than those of any other animal.

And since we share many similar structures and DNA with other organisms who were here first, it is logical to assume our brains evolved in a similar manner and have some of the same intelligence and emotions. We should be talking about gorillaopomorphic or chimpomorphic or even animalmorphic, not anthropomorphic. They aren't emulating us; we're emulating them, because they were doing it first.

The more time I spend watching animals, the more I see humans in them. We've all heard stories about elephants mourning their dead, including seeming distraught due to the absence of a family member. Crows and ravens can pull up long strings tied to a horizontal bar with a piece of meat on the other end. They pull the string up as far as they can, trap it with a foot, and repeat until the morsel is within reach. A chimpanzee in a Swedish zoo was discovered to spend his early mornings hiding rocks behind logs and hay piles he created and later using them to throw at zoo visitors. Guess he didn't want company! I've watched a female fox bury the remains of one of her babies after a badger killed and ate most of it. I've seen bison and elk mourn the death of their babies for hours, sometimes all day long, after a wolf or bear got it. We once watched a bison mom who had given birth to a stillborn calf fend off wolves for hours, until she was exhausted. She then suddenly left only to return with some of her friends as reinforcements. There are many, many other examples.

One of the reasons I started thinking about animal intelligence was because of a story I heard years ago about an orangutan at a zoo that kept getting out of its locked enclosure and letting the rest of the orangutans out with him. I had believed that story because I knew orangutans were smart, but I didn't have any proof it was true, until the head zookeeper involved told it on NPR's "Radiolab."

Jerry Stones was the head zookeeper in the 1960s at the zoo in Omaha, Nebraska. One day some of his keepers came to him and said all the orangutans were loose and up in the trees near the elephants. They all ran to the orangs, lured them back to their enclosure, and then tried to figure how they had gotten out. Jerry was sure one of the keepers had forgotten to lock the enclosure door. Over the next few weeks it happened several more times with the same results. The keepers swore they were making sure the door was carefully locked. Jerry threatened to fire someone. Several days after the last escape, one of the keepers came running to Jerry and said, "You have to come see this." They snuck up to the orangutan enclosure and watched Fu Manchu, the dominant male, fiddling with the door lock. He had something in his hand, but they couldn't figure out what it was. As they watched they realized he had a piece of wire he slipped into the slit between the door and the door stop and skillfully get it around the door latch. Then he pulled on both ends of the wire and the latch pulled out of its hole. They were free!

Jerry and the other keepers were amazed but they still had the wherewithal to stop the orangutans, and confiscate the wire. They later realized Fu Manchu was hiding the wire in the area between his lower lip and teeth.

He was not only using a tool; he was using a tool in a way he had never been taught and he was storing it for future use. I guess his one mistake was that he was too naïve to watch for people spying on him.

We know a growing number of animals, from Darwin's finches to chimpanzees, are capable of using tools. But here was an animal hiding a tool he knew he would lose if discovered, and planning to use it in the future.

Many biologists who study animal behavior dismiss the idea of nonhuman higher intelligence or emotion. I had a very highly-respected animal behavior professor in college who was absolutely scornful of a young, uneducated woman who had the audacity to go to Africa and study chimpanzees and – horror of all horrors! – she also had the nerve to name them human names, such as David Greybeard and Frodo rather than Chimp 1, Chimp 2, Chimp 3, etc. Of course, that young woman was Jane Goodall, who has contributed so much to our knowledge of chimps and is now considered the world's foremost chimp expert.

I wonder what we would discover if we were smart enough to understand their language? And if we really are the smartest species, why are we in the process of destroying the Earth with our overpopulation, global warming, destruction of habitat, etc.? Maybe we should be learning from them.

The two sides of Clint Eastwood

COVID and the looming eviction crisis