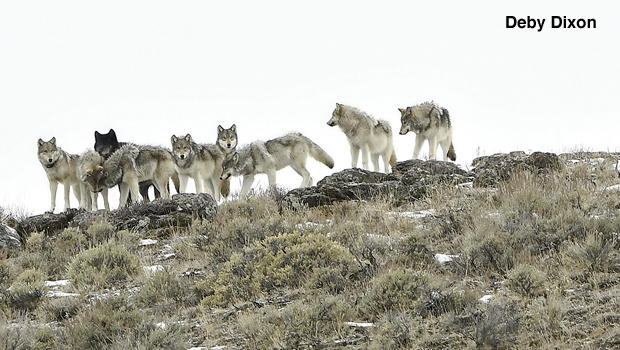 The Yellowstone Wolf Project has monitored the reintroduction of wolves into the national park since the mid-1990s. Photographer and wolf advocate Deby Dixon, who is currently the leading expert on the Wapiti Lake Wolf Pack in Yellowstone, talked to "Sunday Morning" videographer Judy Lehmberg about the survival of the Wapiti Lake wolves.

To understand the story of the Yellowstone wolves, it is necessary to understand how they are named. If a wolf is caught by the Yellowstone Wolf Project and collared, it gets a number. If it isn't collared, the people who spend lots of time watching and photographing the wolves come up with a name, usually based on the wolf's appearance, but not always.

The main wolves in this story are: 755, a male wolf of unknown origin (that is, no one knows which pack he was born into); '06, a legendary alpha female who could bring down a full-grown elk by herself (her name reflects the fact she was born in 2006, although she was later collared and became "832"); the White Lady (the longtime alpha female of the Canyon Pack, who was all white – a fairly rare color in Yellowstone wolves – and lived a long time, 12 years, until she was illegally shot just north of Yellowstone); and the Wapiti Alpha Female, the current alpha female of the Wapiti Lake Pack (she has never been collared).

I first met 755M after waiting for him for over 10 hours near the dirt road leading to the Slough Creek Campground just west of Yellowstone's Lamar Valley. There was a carcass so we didn't know if he would show up, but we thought some wolves or bears eventually would. After hours of waiting, we saw 755 come in from the east, cautiously go up to the carcass, spend a few minutes eating, then head back east with his prize, a back leg. He was a good provider to his alpha female at the time, '06, and their pups. He had walked over seven miles from their den to bring food back to them. That was at least his second trip to the carcass that day – two 14-mile round trips!

He and '06 raised those pups to yearlings and beyond. [One of them, 926, is currently the alpha female of the Lamar Pack.] The following year, 755 and '06 went east, left the park, and went right into the sights of a Wyoming hunter who shot and killed '06. One of the most famous wolves in Yellowstone's history, her death was covered by media outlets all over the world, and at least one book has been written about her.

755 returned to his sons and daughters in Lamar Valley, and eventually found a new mate who was shortly after killed by one of his daughters. His pack was now just him and his now-grown pups, an untenable situation. His offspring then abandoned him for new mates, a natural thing for them to do. 755 wandered to the west and was basically alone for two years.

Finally, in July 2014, after a long string of bad luck, 755 met his new love in Hayden Valley, near the center of Yellowstone, a wolf that became known as the Wapiti Alpha Female. The courtship lasted a few days. Her famous father, 712, appeared sad at her departure. During the final moments before the new couple went their own way, they were on the east side of the Hayden Valley road while her family, the Canyon Pack, were on the west side. Her mother, the White Lady, did not seem the least upset; she continued walking west.  But daddy, 712, stopped in the sage and mournfully howled for his daughter for a long time, finally giving up and following the White Lady west.

Then they did the most remarkable thing.

The Canyon Pack with their strong alphas had held the Hayden Valley territory for many years, but in a most unusual move, they continued west and set up in new territory on the west side of the park, in the Midway Geyser basin region. They apparently gave Hayden Valley, with its superb hunting opportunities, to the new couple, who became the alphas of the new Wapiti Lake Pack.  One might wonder if the Canyon alphas somehow knew that of all of their children, she was the one that would become a strong alpha female and carry on.

In the Spring, the Wapiti Alpha Female gave birth to at least 5 puppies and was seen in the Canyon Pack's traditional rendezvous site in Hayden Valley.  When the park closed for the winter, the pack still had all five pups, but something happened, and when they showed up on the northern side of Yellowstone later that winter, they only had one. She was eventually collared as 1091F. She and her daddy appeared to be quite close, often traveling and hunting together while mom attended to five new pups the following spring.

Later that same spring, 1091 found a mostly consumed winter kill bison carcass close to the road in Hayden Valley. 1091 brought her mother and father to the carcass the following day and we were thrilled to see the three of them together.

The Wapiti White Female had become much whiter - she was a light grey when she was born and had become the exact color of her white mother.  The three wolves looked a little ragged from winter, and from taking care of five new pups, but expectations were high about seeing the offspring and watching the family over the summer and fall.  But our plans were not the same as the wolves'.

Later that summer, three male wolves from the rival Mollies Pack came calling. They created all sorts of drama with howling and running, and we quickly realized they were looking for mates. 755 didn't stand a chance against three healthy young males. As the Mollie males chased him away we realized he was losing his second family.  Hopes were unrealistically high for months to come that he would get them back. We knew 755 was already an old wolf at age eight and that the Wapiti Alpha Female chose the safety of her family when she let the Mollie males stay.  The Mollies could have easily killed 755 and had several opportunities to do so, but they let him go.  His mate saved his life and possibly the lives of his 5 pups with her choice.  Then, another incredible thing happened.

755 stayed in the Hayden Valley area for much of that summer, returning to visit his pups several times. The former Mollie males discovered him and chased him, but he escaped.  When he came to visit one last time, 755 found the pups playing at Alum Creek.  The pups greeted their dad with much excitement and tail wagging.  They hung out together for a while, and then went into a rendezvous area until the rest of the pack arrived. The former Mollie males held back while the Wapiti Alpha Female greeted her former mate and spent some time with him and their pups.  Evidently this was goodbye, because he moved out of Hayden Valley for good and headed back to the Lamar Valley area.

755 was seen several times after that (once with an injured right hip apparently after a grizzly bear ripped through his skin with its claws). He was moving slowly but eventually recovered.  After roaming around for a while, 755 was last seen in Yellowstone heading east through the Lamar Valley. He later became the new alpha male of the Beartooth Pack, outside of Yellowstone's east border. He'd made Yellowstone history by being the alpha of two separate Yellowstone packs, the Lamars and the Wapitis, and then was briefly the Beartooth Pack alpha.

755 has not been seen for over a year and is believed dead.

The Wapiti Alpha Female is alive and well. Her pack numbered over 20 wolves in 2017, and currently numbers 19. In wolf world, that is a huge success.