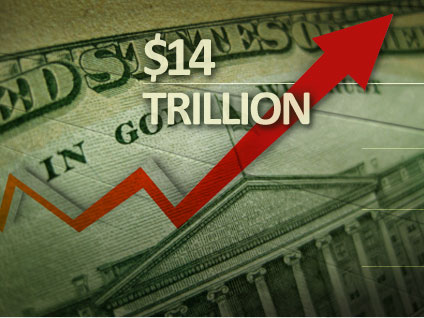 The latest posting today of the National Debt shows it has topped $14 trillion for the first time.

It took just 7 months for the National Debt to increase from $13 trillion on June 1, 2010 to $14 trillion on Dec. 31. It also means the debt is fast approaching the statutory ceiling $14.294 trillion set by Congress and signed into law by President Obama last February.

The federal government would have to stop borrowing and might even default on its obligations if Congress fails to increase the Debt Ceiling before the limit is reached.

Some Republicans in the new Congress have said they'll seek to block an increase in the Debt Ceiling unless a plan is in place to significantly reduce federal spending and unfunded government liabilities on entitlement programs such as Social Security and Medicare.

White House economic adviser Austan Goolsbee warned yesterday that it would be "catastrophic" if the U.S. Government were to default on its financial obligations.

"That would be the first default in history caused purely by insanity," said Goolsbee of plans to block an increase in the Debt Ceiling.

Debt Ceiling: The First Big "Showdown"?
CBS Evening News: $14 Trillion in Debt - Why You Should Care
More from Mark Knoller: Obama's 2010 By the Numbers

ISIS-K could be able to launch attacks out of Afghanistan within a year: DOD official
Mark Knoller