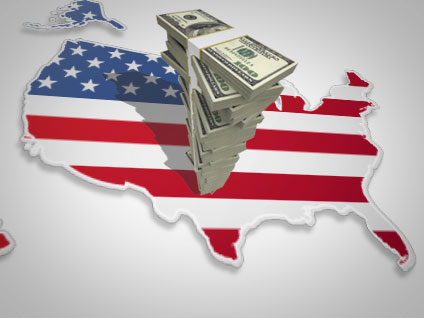 The National Debt topped $13-trillion for the first time in U.S. history - reflecting the surge in government spending that will push the Debt to increasing highs through the rest of the decade.

Tallied against the nation's Gross Domestic Product, the latest Debt number amounts to nearly 89.4 percent of the total economy.

It's not often that President Obama mentions the debt, but 90 minutes before the latest number was posted, it was part of his speech on the economy delivered at Carnegie Mellon University in Pittsburgh.

He was making the case that the record high federal deficits on his watch were not really his fault.

"We took office amid a crisis, and the effects of the recession put a $3 trillion hole in our budget before I even walked through the door," he explained to his audience.

Without mentioning his predecessor by name, he argued that blame for the expanding Debt reflected the policies of President George W. Bush.

"By the time I took office, we had a one-year deficit of over $1 trillion and projected deficits of $8 trillion over the next decade," he said. "Most of this was the result of not paying for two major tax cuts skewed to the wealthy, and a worthy but expensive prescription drug program that wasn't paid for."

Mr. Obama says that if these were "ordinary times," he would have acted more aggressively to reduce the annual federal deficits.

"But we took office amid a crisis, and the effects of the recession put a $3 trillion hole in our budget before I even walked through the door."

He said the "economy is still fragile," and it would be risky to "put on the brakes too quickly."

The National Debt has so far increased $2.4 trillion on Me. Obama's watch. The Debt stood at $10.626 trillion on the day he took office. It increased $4.9 trillion during Pres. Bush's 8-years in office.

Both Mr. Obama and Congress expect the Debt to continue to soar. On February 12, Mr. Obama quietly signed legislation that raised the Debt Limit to nearly $14.3 trillion.

It's likely that figure will have to be raised in less than a year.