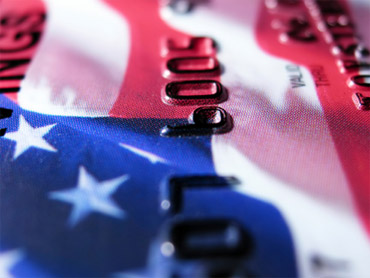 The United States' debt on Wednesday exceeded $15 trillion, according to the Treasury Department's "Debt to the Penny" website.

The total public debt outstanding was listed at $15,033,607,255,920.32 on Wednesday afternoon, with two thirds of that debt held by the public and one third made up of intergovernmental holdings.

(The U.S. Debt Clock website also shows the national debt above $15 trillion, though that site is only an estimate based on actual amounts from 2010 and projected totals from 2011. As CBS News' Mark Knoller points out, the debt doesn't actually continuously rise, as the Debt Clock site suggests; it is based on daily revenues and expenses by the government, and the official number sometimes declines.)

Republican presidential candidate Herman Cain said in response to the news that President Obama's "disastrous economic policies are not only an economic travesty, they are immoral."

"We cannot leave our children and grandchildren with this enormous burden," he said in a statement. "We must take responsibility for our actions."

Another Republican presidential candidate, Texas Governor Rick Perry, said "[t]his astounding debt is a heavy pair of cement shoes for our children and America's economic future." Perry is among the Republicans pushing for a balanced budget amendment to the Constitution.

The Republican National Committee, meanwhile, emailed reporters asking "how much is $15 trillion?" It included claims like "15 Trillion One-Dollar Bills Would Wrap Around The Earth's Equator Over 58,000 Times" and "It Would Take The Average Household Over 300 Million Years To Pay Off The National Debt On Their Own."

On January 20, 2009 - the day Mr. Obama took office - the national debt was $10.63 trillion, according to the Treasury Department. That means the debt has increased approximately $4.37 trillion on his watch.

After a contentious debate, Congress passed a bill to raise the then-$14.294 trillion debt limit on early August, and the bill was signed by the president. That deal established the bipartisan supercommittee charged with agreeing on at least $1.2 trillion in savings over ten years by Thanksgiving; failure to do so is supposed to trigger automatic domestic and defense spending cuts, though members of Congress have signaled they may act to halt automatic cuts.