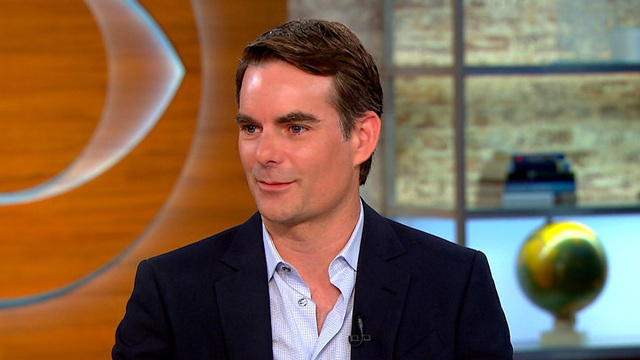 As South Carolina moves closer to removing the Confederate flag from its capitol, and tensions sparked by the debate continue to rise, NASCAR legend Jeff Gordon spoke out on the issue.

"It has no place on any of our team apparel or memorabilia or anything like that," Gordon said Tuesday on "CBS This Morning." "I'm glad that it's not out there."

On June 23, NASCAR issued a statement saying they agreed with South Carolina Gov. Nikki Haley who said it was "time to move" the Confederate flag from statehouse grounds.

"As our industry works collectively to ensure that all fans are welcome at our races, NASCAR will continue our long-standing policy to disallow the use of the Confederate Flag symbol in any official NASCAR capacity," it read in part.

"I support NASCAR. I'm so glad that they banned it," Gordon said. "We've done the same thing at Hendrick Motorsports."

After 92 career victories, the racing legend and four-time NASCAR Cup Series champion sits at number three on the NASCAR all-time wins list. He's also sitting in the historic No. 24 car, brought back with the classic rainbow look.

"It's such an iconic paint scheme. It's what I got introduced to NASCAR with," he said.

Gordon won three championships and more than 50 victories while driving in that paint scheme created by DuPont Performance Coatings, now Axalta Automotive Coatings. He will hit the racetrack with that car at Bristol Motor Speedway on August 22.

NASCAR enthusiasts have themselves, in part, to thank for the car's historic return since its last appearance in 2000.

"The reason we're bringing it out is because Twitter, Facebook, social media, they want this car out on the track, so it's exciting for them, exciting for us and for me to get to drive it again," Gordon said.

Gordon started competitive racing at the age of 5. He quickly made a name for himself nationwide, before he even turned 18. Gordon joined NASCAR in 1992 and won his first race in 1994 with many others to follow.

After 23 years on the track, Gordon will retire from NASCAR at the end of this season. He said he's not stepping away from racing altogether, but is looking forward to spending time in other areas of his life.

"I've got two young children, a beautiful family, and I don't get to spend a lot of time with them," he said.

Gordon said the decision has been "three or four years in the making" after a couple rough seasons. Most important, wants to go out on top.

"I want to go out still being competitive. I'd like to be a little bit more competitive than we've been this year, but we still have a lot of races left to go and I feel confident we've got a team that we can end on top," Gordon said.

Gordon is currently 11th in the NASCAR Sprint Cup Standings and sits behind number four Jimmie Johnson, a driver Gordon said is one of the best right now.

"If you look at his record, he's been incredible, won six championships, he's with a great team," Gordon said. "He's certainly one of the best I've raced against."

Gordon also said Dale Earnhardt Sr. is "one of the best" competitors against whom he's raced.

Gordon's last season is also marked by a few speed bumps, including speeding penalties and an argument with his crew Chief Alan Gustafson.

Despite the tense verbal exchange, Gordon said it made the team stronger.

"We take those challenges head on. We were immediately in conversation and we came through it really, really strong," Gordon said. "We've actually been more confident and better since then."