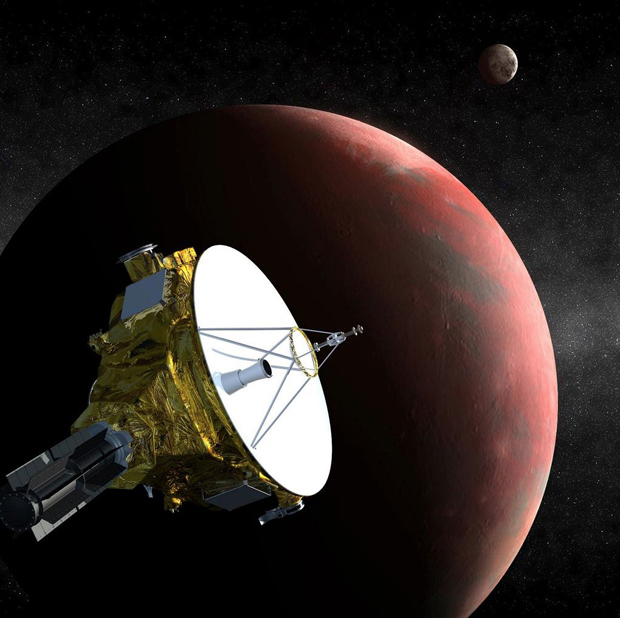 Eight years outbound from Earth, NASA's New Horizons probe passed the orbit of Neptune Monday, in good health and on course for a high-speed dash past enigmatic Pluto and its large moon Charon next summer, giving humanity its first close-up look at a dwarf planet once thought to be the ninth and outermost member of the sun's family.

If all goes well, the nuclear-powered spacecraft, the centerpiece of a $700 million mission, will pass within about 6,200 miles of Pluto's icy surface at 7:49:59 a.m. EDT on July 14, 2015, studying the dwarf planet and its five known moons with the most powerful suite of instruments ever launched on an initial planetary reconnaissance mission.

Even so, at Pluto's enormous distance from Earth -- so far that it will take radio signals some 4.5 hours to cross the gulf -- it will take days to beam back even a few high-priority images and a full nine months to transmit the complete set of encounter observations.

By that point, New Horizons will be well on its way into the Kuiper Belt, a vast realm of comets and frigid leftovers from the formation of the solar system 4.6 billion years ago. With any luck, astronomers will find another dwarf planet along the spacecraft's trajectory for a second, even more remote flyby in the years ahead.

For New Horizons principal investigator Alan Stern, the Pluto encounter and a chance to study one or more bodies in the Kuiper Belt herald a new era in planetary exploration, a first direct glimpse into a vast realm "billions of miles across populated by trillions of comets and who knows how many small planets like Pluto."

"What we used to call the outer solar system, where giant planets reside, is actually the middle zone of the solar system," he said. "It is the Kuiper Belt that is the third zone, the true outer solar system. And within it, a new class of planet, the dwarfs. We didn't know they were there, we thought Pluto was a misfit and now we see it in context."

Stern said there are more dwarf planets in the solar system than "all the giants and terrestrials combined. You might ask yourself, who's the misfit now?"

"What New Horizons is doing is flying to the biggest, the brightest, the first discovered and for what we know, the richest, most complex of these dwarf planets in the Kuiper Belt," Stern said.

In a bit of cosmic coincidence, New Horizons' passage through Neptune's orbit 2.75 billion miles from Earth came 25 years to the day after NASA's Voyager 2 spacecraft flew past the giant blue world and its strange moon, Triton, in that program's final planetary encounter.

Voyager project scientist Ed Stone marveled at the time that one could visit a new world for the first time just once. For Stern, that same experience with Pluto, the last of the original nine planets to be explored by a visiting spacecraft, is less than one year away.

"Some of us started on this quest to explore Pluto and the Kuiper Belt almost 25 years ago, about the time Voyager was making its flyby of the Neptune system," he said. "I think of the Pluto system as a Christmas present that's been sitting under the tree for 25 Christmases, and were going to unwrap that present next July."

Already, the spacecraft has snapped long-distance views of its quarry showing a star-like Pluto and a dimmer pinpoint of light that marks Charon. But no detail is yet visible. Even the powerful Hubble Space Telescope can do little more than see brightness variations across Pluto's surface.

"Even with all our modern technology, everything we know about the Pluto system today would probably fit on one piece of paper," Stern told reporters. "What do we know? Well, we know that Pluto is surprisingly made primarily of rock, 70 percent rock by mass, it has a fascinating escaping atmosphere made up of nitrogen, the same thing that you're breathing in this room.

"Pluto has winds, it has polar caps, it has fascinating surface that we know is changing with time and an atmosphere that we know is undergoing global change. And it has a system of at least five satellites. This is just mouthwatering, it's a scientific wonderland that we look forward to exploring."

Provided by the Applied Physics Laboratory at Johns Hopkins University, New Horizons was launched from Cape Canaveral atop a United Launch Alliance Atlas 5 rocket on Jan. 19, 2006. A final burn of the rocket's hydrogen-fueled Centaur second stage engine boosted the spacecraft out of Earth's gravitational clutch at a record-setting 10.07 miles per second, or 36,256 mph.

The probe crossed the moon's orbit in nine hours and reached Jupiter for a gravity assist flyby in just 13 months, picking up a 9,000-mph velocity boost as it headed out on its lonely voyage to Pluto, spending most of its time in electronic hibernation.

"This is the fastest spacecraft ever launched, it made the crossing to Jupiter in just 13 months, arriving in February of 2007 where it precisely hit the aim point to fly on to Pluto eight years later," Stern said. "We crossed the space between Jupiter and Saturn in record time, crossing Saturn's orbit in 2008 on to the orbit of Uranus, which we crossed in March of 2011.

"For the last three years we've been cruising at this high rate of speed across the next billion miles. Today, we crossed the orbit of Neptune, outbound for Pluto to make a little history."

What's killing the honey bees? Mystery may be solved