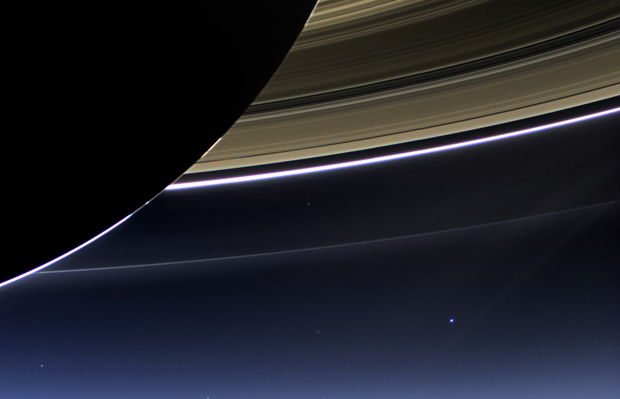 NASA's Cassini spacecraft has beamed back spectacular pictures of Saturn, its rings and distant Earth, a "pale blue dot" nearly a billion miles away, as the robot passed behind the ringed planet last Friday.

Following Cassini's lead, NASA's Messenger spacecraft, in orbit around Mercury, also trained its camera on Earth during a search for undiscovered moons.

"That images of our planet have been acquired on a single day from two distant solar system outposts reminds us of this nation's stunning technical accomplishments in planetary exploration," Sean Solomon, the principal investigator with the Mercury mission, said in a NASA statement.

"And because Mercury and Saturn are such different outcomes of planetary formation and evolution, these two images also highlight what is special about Earth. There's no place like home."

The Cassini images were the brainchild of Carolyn Porco, leader of the spacecraft imaging team at the Space Science Institute in Boulder, Colo. Porco launched a pair of contests inviting the public to submit music and photos that captured the moment of the cosmic encounter and urged people to step outside and wave at Cassini.

A zoomed-in view from Cassini's narrow-angle camera shows humanity's home and its moon as small points of light in the blackness of space, an image intended to spark wonder "in a way we only rarely get to see, from the most distant robotic outpost we have ever established around another planet," Porco said on her web page.

"From the U.S. to New Zealand, England to South Africa, we used the opportunity to contemplate our cosmic whereabouts, the uniqueness of our lush, life-giving planet, and the significance of our own existence," she wrote.

Cassini snapped the images from a distance of about 898 million miles while the spacecraft was passing behind Saturn, in eclipse and out of the direct glare of the sun.

A series of wide-angle shots will be assembled into a mosaic over the next six weeks or so, showing Saturn and its entire ring system in natural colors, as an astronaut passing behind Saturn might see it.

A similar mosaic captured by Cassini in 2006 also showed Earth, but the image was captured as part of a science campaign. It was not optimized to show Saturn in natural color and the narrow-angle camera was not used to zoom in on Earth.

This time around, Porco wanted a mosaic that would appeal to the public, showing the glory of Saturn as well as the tiny point of light that is humanity's home in space.

One segment of the eventual mosaic was released Monday, showing Earth as a star-like point of light just below the rings. The zoomed-in view also was released, clearly showing both Earth and moon. At Cassini's distance, the image scale was 53,820 miles per pixel.

The Voyager 1 spacecraft imaged Earth from an even greater distance in 1990 as it neared the edge of the solar system. It was that image that prompted Carl Sagan to dub Earth a "pale blue dot" in space.

"The illuminated areas of neither the Earth nor the Moon are resolved here," NASA said in a statement. "Consequently, the size of each `dot' is the same size that a point of light of comparable brightness would have in the wide angle camera."

While no surface detail is visible, "this pale blue dot is a succinct summary of who we were on July 19," Linda Spilker,the Cassini project scientist, said in NASA's statement. "Cassini's picture reminds us how tiny our home planet is in the vastness of space, and also testifies to the ingenuity of the citizens of this tiny planet to send a robotic spacecraft so far away from home to study Saturn and take a look-back photo of Earth."