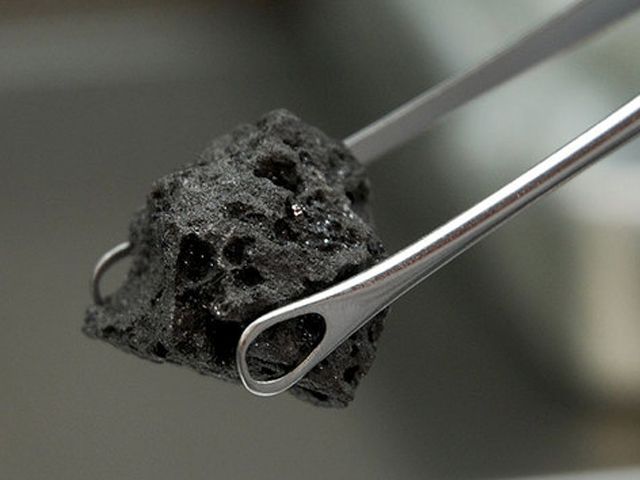 A woman's attempt to sell a purported $1.7 million moon rock was thwarted last week when the buyer she met with turned out to be an undercover agent working for NASA.

The sting, which according to the Riverside County (Calif.) Sheriff's Dept. came after several months of investigation, took place at a Denny's restaurant in Lake Elsinore, Calif., about 70 miles southeast of Los Angeles.

The woman, who authorities did not identify, was detained but not arrested pending the "moon rock" being verified as being of lunar origin. (Coolest New Moon Discoveries)

"It's possible this is a moon rock, but it has to be tested first," Gail Robinson, deputy inspector general at NASA, told the Los Angeles Times.

According to a statement released by the sheriff's office, the undercover meeting took place on Thursday, May 19. After the undercover agent with the NASA Office of the Inspector General (OIG) agreed to purchase the specimen for approximately $1.7 million, the woman produced the rock inside the restaurant.

Several local police officers and NASA OIG agents then moved in on the suspect, took possession of the alleged moon rock and detained the woman for questioning.

Neither the sheriff's office nor NASA has released further information about the investigation, although some media reports have suggested the rock was originally listed for sale on the auction website eBay.

This isn't the first time NASA agents have stepped in to recover moon rocks -- both real and fake.

In December 1995, NASA officials thought they may have found a bit of lost material from the second lunar landing after a lunar rock was advertised for sale by a New York auction house. The sample the space agency had been looking for went missing in 1970 when the registered and certified mail shipment it had been part of was stolen.

Instead, what NASA found was a fraud. Two brothers had claimed their "moon rock" was gifted to their father by former Mercury astronaut/senator John Glenn. In reality, the rock was of earthly-origin and the brothers, Brian and Ronald Trochelmann of Atlanta, plead guilty to wire fraud.

A small piece of an Apollo 17-recovered moon rock, which in 1973 had been presented as a goodwill gift to the nation of Honduras, was recovered in Florida in 1998 after the Miami businessman who had purchased the rock from a retired Honduran military officer responded to a classified ad for buying pieces of the moon.

Alan Rosen replied to the ad, offering his acrylic-encased sample for $5 million. Unbeknownst to him, the newspaper listing had been placed by NASA, which had been looking for fraudulent offers like the Trochelmann's.

A subsequent court case found that under Honduran law, the rock still legally belonged to the country and as such, it was returned in 2004.

carried out the heist of a 600-pound office safe holding lunar and Martian samples. Now the subject of an upcoming book and feature film in development by the author and producers behind 2010's "The Social Network," the student thieves were busted when the Belgian rock collector they contacted to buy the moon material contacted the FBI.

In the students' case, a federal court set the value of the moon rocks at $50,800 per gram based on how much it cost the U.S. government to retrieve the samples between 1969 and 1972.

In total, a dozen moonwalking astronauts returned 2,415 samples weighing a total of 842 pounds (382 kilograms). The lunar material is considered a National Treasure, and with the exception of two sets of goodwill gifts presented to 135 nations, the 50 states, and the U.S. provinces, NASA maintains it has never gifted or otherwise provided any individual with a piece of the moon.

Even the astronauts were not permitted to keep a rock for themselves. Instead, the space agency has recently been presenting moon rocks in name only to the early Mercury, Gemini and Apollo crewmembers to be put on permanent public display.

Outside of lunar meteorites and a few ounces of the moon returned by Soviet robotic probes, all other moon rocks are considered the property of the United States. As such, according to the NASA Office of the Inspector General, those found in possession of samples can be prosecuted for theft of government property, for which there is no statute of limitations.