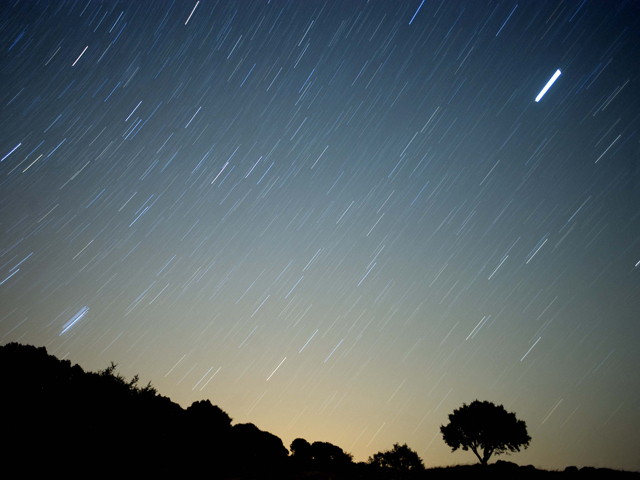 WASHINGTON - NASA and its top scientists are distancing themselves from a space agency researcher who concludes that he found alien bacterial life in meteorites that were collected many decades ago.

Richard Hoover of NASA's Marshall Space Flight Center in Huntsville, Ala., claims that he found fossils that look like the remnants of bacteria in at least two meteorites. His research paper, published online Friday in the Journal of Cosmology, concludes these must have come from outer space.

But his claim has been roundly disputed by other scientists. "There has been no one in the scientific community, certainly no one in the meteorite analysis community, that has supported these conclusions," NASA Astrobiology Institute Director Carl Pilcher told The Associated Press Monday. "The simplest explanation for Mr. Hoover's measurements is that he's measuring microbes from Earth. They're contamination."

In the paper, Hoover states that chemical analysis makes it unlikely to be contamination. Instead, he wrote they are "indigenous fossils" from outer space rather than something found on Earth.

Scientists inside and outside the space agency have criticized and even ridiculed Hoover's study, his credentials and the journal itself. They say that Hoover works in solar physics and doesn't have expertise in astrobiology.

Hoover and the editor of the journal have not responded to e-mails and phone messages from The Associated Press.

In a statement on the journal's web site, editor-in-chief Rudy Schild of Harvard University, called Hoover "a highly respected scientist and astrobiologist with a prestigious record of accomplishment at NASA."

On Monday, NASA issued a statement by Paul Hertz, chief scientist in the science division, questioning the validity of claims that have not gone through peer review. NASA said Hoover failed to advise the agency he had submitted the paper to the Journal of Cosmology after it failed to get published in a more established peer-reviewed journal.

"NASA cannot stand behind or support a scientific claim unless it has been peer-reviewed or thoroughly examined by other qualified experts," Hertz said in the statement. "This paper was submitted in 2007 to the International Journal of Astrobiology. However, the peer review process was not completed for that submission."

The Journal of Cosmology bills itself as peer-reviewed. In his note, Schild wrote that he has asked "100 experts" and "over 500 scientists from the scientific community" to review the paper with their commentary to be posted online, after the paper was released. Typically, scientific journals obtain peer review before deciding whether to publish new research.

The paper's findings were first made public by Fox News.

Pilcher said the cosmology journal "has published papers in which the authors assert that life could not possibly have started on Earth and must have started in interstellar space 10 billion years ago," he said. That theory is not one held by a majority of mainstream scientists, he said.

Similar claims about life in a meteorite found in Antarctica were made by other NASA scientists in 1996 and announced by President Bill Clinton on the White House front lawn. But they were not backed up by follow-up research and remain in dispute. Back then, NASA trumpeted the finding, but not so this time.

"If Hoover wants to be taken seriously by the community of astrobiologists, he needs to publish this in a real journal and to respond to the criticisms from other scientists," Morrison said in an e-mail and on a NASA web site. "That is the way science advances."