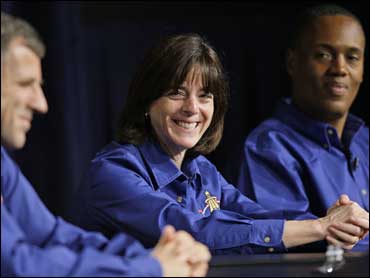 With a launch countdown looming, NASA scrambled to fix a cabin leak aboard space shuttle Endeavour on Wednesday.

The leak was traced overnight to one of two pressure-relief valves in Endeavour's crew cabin, located behind the toilet but separate from the bathroom plumbing, said NASA spokesman George Diller.

NASA decided late Wednesday afternoon to replace the bad valve with one taken from space shuttle Atlantis. The newly installed component is to be tested Thursday.

A problem with one of two thermostats for one of Endeavour's auxiliary power units also cropped up. Engineers initially thought both thermostats would need to be replaced, but they concluded that the faulty one is good enough to fly as is and, besides, the system has built-in redundancy, Diller said. These units generate power for the shuttle's crucial hydraulic systems.

All the extra work can be completed in time for Endeavour's planned liftoff Tuesday, Diller said, but it will be tight and anything else; like more thunderstorms or mechanical problems; could force NASA to postpone the flight to the international space station.

Storms already interrupted work at the shuttle launch pad and forced a one-day postponement for the launch of NASA's Mars lander, Phoenix, now scheduled for Saturday.

The shuttle countdown is expected to begin on time Saturday night, and managers will assess the workload Sunday and decide whether a Tuesday launch is still achievable, Diller said. Phoenix may factor into that decision. NASA has only three weeks to launch the Mars lander before standing down for two years, and officials may decide to put Phoenix ahead of Endeavour.

NASA needs at least two days between launch attempts for the lander and the shuttle.

Endeavour will carry Barbara Morgan, a schoolteacher-turned-astronaut who was Christa McAuliffe's backup in 1986. McAuliffe was aboard the Challenger when it broke apart shortly after liftoff.