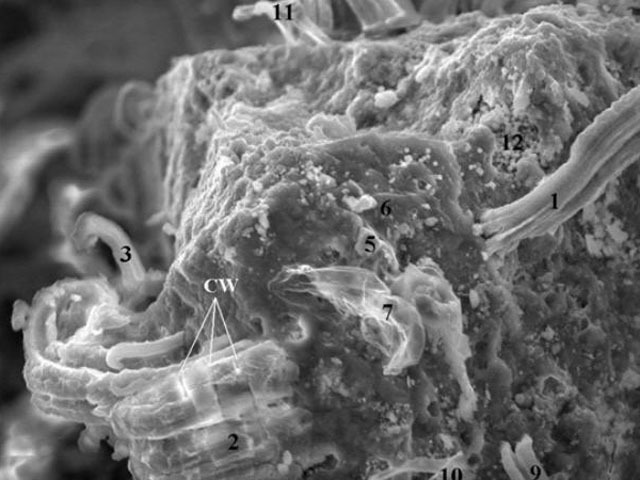 In what's sure to rekindle the debate over the question of life beyond Earth, a scientist at NASA's Marshall Space Flight Center says he has fossil evidence of bacterial life inside of a rare class of meteorites .

Writing in the March edition of the Journal of Cosmology, Richard B. Hoover argues that an examination of a collection of 9 meteorites - called CI1 carbonaceous meteorites - contain "indigenous fossils" of bacterial life.

"The complex filaments found embedded in the CI1 carbonaceous meteorites represent the remains of indigenous microfossils of cyanobacteria," according to Hoover.

That matter-of-fact sentence also underscores the shout-out-loud implication that the detection of fossils of cyanobacteria in the CI1 meteorites raises the possibility of life on comets. And Hoover does not shy away from offering that very conclusion.

Skeptics will doubtless weigh in soon with questions. Still, Hoover's proposition may have stirred more controversy several years ago. More recently, though, some scientists have suggested that meteors and comets slamming into the Earth brought with them the very integuments of life, including water and a host of complex organic chemicals.

If he's right, Hoover may have evidence to support that theory. He argues that the complex filaments he found embedded in the meteors are micro-fossils of extraterrestrial life forms that existed on the meteorites a long time ago prior to the meteorites' entry into the Earth's atmosphere.

"This finding has direct implications to the distribution of life in the Cosmos and the possibility of microbial life on in liquid water regimes of cometary nuclei as the travel within the orbit of Mars and in icy moons with liquid water oceans such as Europa and Enceladus," he writes.

In an accompanying comment, Rudy Schild, the journal's editor-in-chief and a member of the Harvard-Smithsonian's Center for Astrophysics, announced that the publication has sent out a "general invitation" to more than 5000 scientists to review the paper.

"We believe the best way to advance science, is to promote debate and discussion," he wrote.