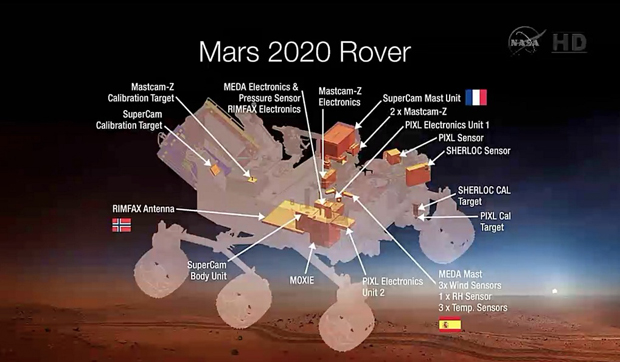 NASA's next Mars rover will feature state-of-the-art science and technology instruments, including a device to cache rock and soil samples for possible return to Earth and another to extract oxygen from the martian atmosphere, testing technology that could help future astronauts "live off the land" to some extent, officials said Thursday.

Modeled after NASA's hugely successful Curiosity rover now operating on the red planet's surface, the Mars 2020 rover will weigh roughly the same, about one ton, feature the same nuclear power pack and use the same "sky crane" entry, descent and landing system.

While it will look almost identical to Curiosity, the Mars 2020 rover is expected to cost about $1.9 billion, some $600 million less than Curiosity thanks to the common design and left over spare parts, and it will feature a different suite of instruments.

"This rover's going to carry new, innovative instruments like we've never seen before on Mars to conduct geological investigations on the surface to determine potential habitability, but also to look for potential signs of past life in the geological record," said John Grunsfeld, director of space science at NASA Headquarters.

Of 58 proposals submitted from around the world, NASA selected seven, announcing the winners during a news conference at agency headquarters. The compact instruments will weigh about 90 pounds altogether and cost some $130 million to develop.

Along with searching for "biosignatures" in the martian rocks and soil it studies, the 2020 rover will be on the lookout for particularly interesting samples that might warrant more detailed analysis on Earth.

While the details are still being considered, the 2020 rover is expected to be equipped with a caching system to store small samples in sealed tubes that could be retrieved by a future robotic spacecraft. Or an astronaut.

"As you might imagine, we're still early on in the mission design and how exactly the cache is going to be is still being worked out," said Michael Meyer, lead scientist with NASA's Mars exploration program.

"The expectation is it will be on the rover, the samples will be cached and then there is some debate whether or not we drop the cache and the rover goes off and does its own thing somewhere else, or whether or not it just stays with the rover the whole time," he said.

A third option is to drop some of the cached samples off at some point during the mission and to keep other samples with the rover.

Like Curiosity, the 2020 rover will be equipped with an imaging mast carrying a pair of "souped up" cameras. One, called Mastcam-Z, will be capable of panoramic and stereo imaging, providing the same sort of perspective an astronaut might have standing on the surface. The "Z" refers to the camera's ability to zoom, something Curiosity's cameras cannot do.

Grunsfeld said the new camera will "knock our socks off."

"You're going to feel like you're on Mars," he said. "It's going to be fantastic."

A second mast-mounted camera system is known as SuperCam. Similar to the ChemCam instrument aboard Curiosity, SuperCam will be able to vaporize rock samples with a powerful laser and study the components blasted away for analysis of chemical composition and mineralogy, including remote detection of organic compounds.

A body-mounted instrument known as PIXL, for "Planetary Instrument for X-ray Lithochemistry," will use an X-ray fluorescence spectrometer to map out chemical elements in targeted samples with greater detail than ever before. Another instrument known as SHERLOC will be built around an ultraviolet laser spectrometer designed to study mineralogy and search for organic compounds.

A Spanish weather station will measure temperature, wind speed and direction, pressure and humidity, along with studying the dust suspended in the martian atmosphere. And in a first for Mars exploration, the 2020 rover will be equipped with a ground-penetrating radar capable of detecting geologic structures three tenths of a mile down.

The seventh instrument in the 2020 rover's scientific arsenal is the Mars Oxygen ISRU Experiment, or MOXIE, designed to extract oxygen from the carbon dioxide making up the thin martian atmosphere.

Being able to generate oxygen in situ, and possibly water and even rocket fuel at some point in the future, "really changes the dynamics" of possible crewed missions to Mars, Gerstenmaier said.

"If you can get propellant, or get oxidizer, for your ascent stage to come off of Mars and you don't have to carry that with you, that really changes your mission design," he said. "If you can actually cache and put oxygen in storage tanks before the crew even arrives and you know they have a habitable environment and a place to go when they get there, that's tremendously important to us.

"This will buy down the uncertainty of that it will make sure we understand the risks associated with that."